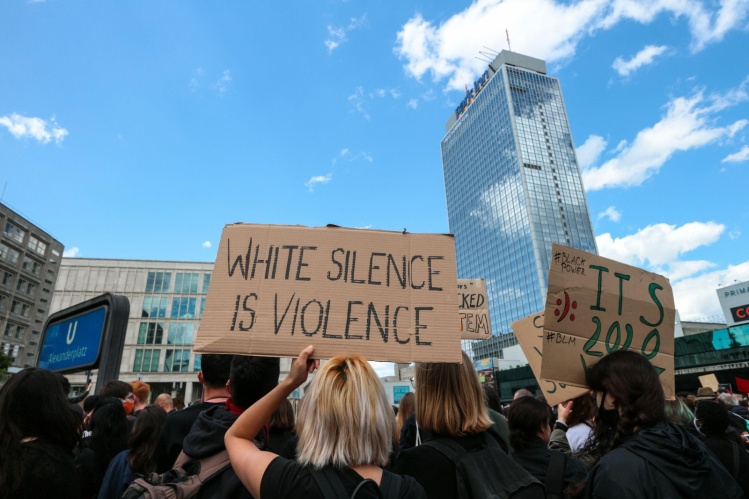 America is a strange place these days. It is difficult to recall another time when two diametrically opposed groups, the progressive and the reactionary, were both ascendant at once—when one group of people reached quite such heights of hypervigilance over supposedly offensive language while another worked so determinedly to dismantle basic rights. In one universe, a white person is shamed for being so presumptuous as to “agree” with the ideas of the Black Lives Matter movement; in another, a key provision of the 1965 Voting Rights Act—one of the pillars of racial equality under the law—is struck down, and a mob, misled by the loser of a presidential election, attempts to reverse the results of the democratic process. Meanwhile, social critics decry the excesses of whichever camp offends them more, conveniently ignoring any facts that might blur their arguments (and interfere with their book sales). One unfortunate result of such either/or-ism is the way it compromises the credibility of important and necessary voices.

Take the case of John McWhorter. An associate professor at Columbia University and the author of over twenty books, McWhorter, who is African American, is not only a star in the world of linguistics but also an outspoken critic of what he often rightly perceives as fuzzy and dangerous thinking on the subject of race, a frequent focus of the New York Times op-ed columns he began writing in 2021. In his most recent book, Woke Racism: How a New Religion Has Betrayed Black America, McWhorter, as the book’s subtitle suggests, declares the current strain of political correctness and “wokism” to be not like a religion but to be an actual religion. McWhorter, an atheist, does not mean this as a compliment. By religion he means a set of pronouncements that are antithetical to logic and goals that are unattainable in the world in which we actually live. To demonstrate this anti-logic, he sets up a chart juxtaposing various “woke” beliefs that directly contradict one another. The statement “If you’re white and date only white people, you’re a racist” is set opposite “If you’re white and date a black person, you are, if only deep down, exotifying an ‘other.’” Next to the statement “Silence about racism is violence” is “Elevate the voices of the oppressed over your own.” Logic, McWhorter notes, is not the point for the woke faithful: “Beyond a certain point, one is not to think one’s way through a dogma in logical fashion, from A to Z, and decide whether it makes sense. At a certain point you are to suspend logic and have faith.” As for those unattainable goals, the woke seek a world in which every last vestige of racism has been wiped from the minds of the populace. The fact that this will never come to pass, McWhorter explains, is exactly the point. Referring to the champions of wokism as “the Elect,” he writes,

To these people, actual progress on race is not something to celebrate but to talk around. This is because, with progress, the Elect lose their sense of purpose. Note: What they are after is not money or power, but sheer purpose, in the basic sense of feeling like you matter and that your life has a meaningful agenda.

What makes wokism dangerous rather than simply irritating, McWhorter asserts, is that it can and does lead to real-world harm. A competent, respected university official who sends one ill-considered tweet, then apologizes, is nonetheless out of a job, a victim of unforgiving zealotry. A reluctance to discipline Black students out of fear of appearing biased, even when the students are misbehaving, allows classrooms to be disrupted, with the price ultimately paid by other Black students—the very people wokism is ostensibly meant to help. Like much that McWhorter writes, his assertions here mix eloquence with simple common sense.

Unfortunately, he does not stop there.

McWhorter sensibly believes that racism is a fact of life; that we must fight racism when we encounter it; but that to make victim status the centerpiece of our identities hampers our progress and leaves us unable to enjoy the progress we do make.
sharetweet

A frequent target of McWhorter’s book is the writer Ta-Nehisi Coates, whose 2015 memoir-treatise, Between the World and Me, established his reputation as arguably the nation’s most prominent—and certainly its hippest—thinker on the subject of race. Among other things, McWhorter accuses Coates of being willfully pessimistic, of ignoring positive developments in favor of arguments that all work their way around to the same unsurprising conclusion: that racism is king in America. “Hot on the heels of Biden’s inauguration,” McWhorter notes,

Ta-Nehisi Coates published an article titled “Donald Trump Is Out. Are We Ready to Talk About How He Got In?”.... Never mind the notion that no one had been ready to “talk about” something that was actually mulled over utterly, thoroughly, and unceasingly for the entire four years Trump was in office. More to the point: Why, exactly, do race issues mean that startling developments in the present are less worthy of real discussion than gloomy history lessons? The reason we supposedly “really need to be talking about” 2016 over 2020 is because 2020 was good news, but 2016 was Good News in the Christian meaning of the term—as in, a message about racism lingering and in need of battling. Good News is gooder than good—i.e., real—news.

McWhorter gets no argument from this corner.

But what is interesting about McWhorter’s targeting of Coates is that the two men sometimes take the same flawed approach—one that involves resisting complexity—in making very different points. In Between the World and Me, Coates considers white racism every way but Sunday while dismissing the very real problem of Black-on-Black homicide with this breezy passage: “To yell black-on-black crime is to shoot a man and then shame him for bleeding.” McWhorter does his own version of this. Like his hero Shelby Steele, author of the best-selling 1990 book The Content of Our Character, McWhorter sensibly believes that, yes, racism is a fact of life and probably always will be; that we must fight racism when we encounter it; but that to make victim status the centerpiece of our identities hampers our progress and leaves us unable to enjoy the progress we do make. But in stressing that last point, McWhorter plays down the nature of the fight. Referring to the events of January 6, 2021, when a mob goaded by Donald Trump stormed the U.S. Capitol, bent on stopping the peaceful transfer of power, McWhorter writes, “The Capitol mob are changing nothing…. That they tried to threaten democracy is less important than that their attempt failed.” They did not try to threaten democracy; they did threaten democracy. And yes, their attempt failed—this time. The Capitol riots constitute the loudest alarm bells of my lifetime (which began two years before McWhorter’s) about the dangerous mix of misinformation and xenophobia at work in America. A poll taken in 2021 found that over half of Republicans believe the 2020 presidential election was “stolen,” and people who hold such views are like roaches: for every one you see (as at the Capitol riots), there are many, many more you don’t.

McWhorter’s downplaying of the fight appears to extend backward in time as well. “Segregation,” he writes, was “outlawed from on high, with black Americans not having had to endure the long, slow clawing our way into self-sufficiency regardless of prevailing attitudes that other groups had dealt with.” He adds that the civil-rights movement “was about changing rules, and in a way, this was less useful in fostering true, gut-level, no-questions-asked pride. We [Blacks] could not say that we clawed our way to where we got despite whites just staying the way they were.” That is simply a distortion of history. Someone who knew no better might interpret such passages to mean that the U.S. government, with no prodding, decided out of the goodness of its heart to make racial equality the law of the land, that Black people facing down police dogs and fire hoses was somehow unrelated to a “long, slow clawing.”

Where is the book that condemns the excesses of the woke while acknowledging the very real nature of the forces that wokism is meant to combat? Where is the book that calls for us to rail against intolerance without being intolerant ourselves? Where is the book that does not avoid complexity as antithetical to its arguments but embraces it as a necessary condition of understanding what is going on? Maybe, one of these days, McWhorter and Coates will team up to write it. Unlikely, maybe—but hey, a fellow can dream.