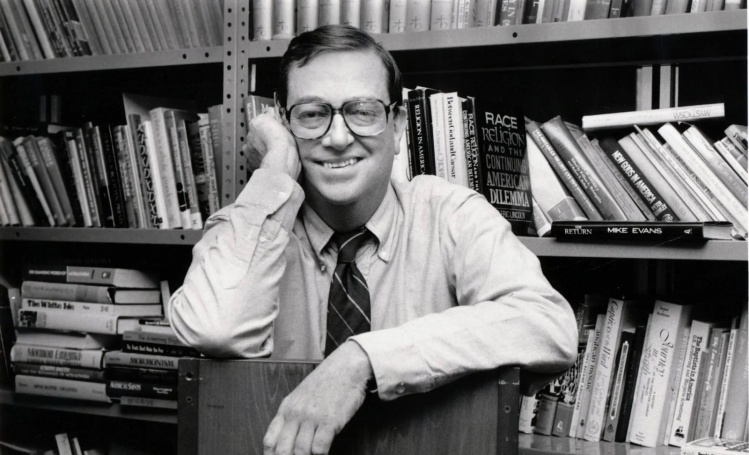 John Leo died on May 10 at the age of eighty-six. The headline for the New York Times obituary described him as “Columnist Who Took Aim at Liberal Pieties.” That he was. For several decades, John did a kind of sentry duty in national publications like Time and U.S. News & World Report against the cultural encroachments of dogmatic liberalism.

But before that, from 1963 to 1967, he was an associate editor at Commonweal, part of a squad of younger editors—Daniel Callahan, Wilfrid Sheed, and myself—who inhabited a small boiler room of ugly cubicles furnished with desks and bookshelves likely salvaged from bankrupt private eyes in the 1930s. Editor James O’Gara and publisher Edward Skillin toiled in equally Spartan offices off a larger room with filing cabinets and desks for our bookkeeper, receptionist, and subscription overseer. Anne Robertson, our essential production manager, laid out the pages and pasted up the galleys on top of a row of gunmetal-gray supply cabinets. Anne, if I recall, had the office’s only electric typewriter. Like Ishmael, I alone survive to tell the tale.

Those were pivotal years—the close and fallout of Vatican II, the passage of the civil-rights struggle from the March on Washington to Black Power and urban violence, the ramping up of the Vietnam War from Ngo Dinh Diem’s assassination to a full-scale U.S. invasion. Three days a week we would crowd into Jim’s office to evaluate manuscripts, propose new articles, and on Friday discuss the editorials that we would research over the weekend and submit to one another for critique and revision by Monday afternoon. I remember, in particular, our intense efforts at surveying, comparing, and parsing contending reports on the war in Vietnam and its masterminds in Hanoi and Washington.

Yet if the times often seemed grim, the staff was not. John was the liveliest among us, which is to say a lot. Bill Sheed might turn quiet in staff meetings but otherwise matched John quip for quip. The baby of the group, I mostly kept my head down. Not a small amount of talk in these august precincts of liberal Catholic (but uniformly male) intellectualism actually turned around sports. Dan may have just earned a national reputation for his prizewinning book, The Mind of the Catholic Layman, but to us that only disguised the fact that he had gone to Yale on a swimming scholarship. John and Wilfrid’s knowledge of baseball statistics and history was encyclopedic. In a remembrance of John, his colleague at Time, Lance Morrow, recalls how John constructed a fantasy team with real players all bearing the names of vegetables (perhaps, Morrow guesses, Matthew Brucolli, the editor of Ring Lardner’s baseball stories; Billy Beane; Dustin Pease; etc.) and another team whose players had fruit names (Bob Lemon, Ray Apple, and so on.) That came long after his Commonweal years, but John’s sense of the absurd was already abundant when I worked with him.

John was indeed constitutionally irreverent, but his major signed articles of those years were not.
sharetweet

Rodger Van Allen’s history of Commonweal refers to “Leo’s swinging and irreverent writing style,” which proved “irksome to some readers.” John was indeed constitutionally irreverent, but his major signed articles of those years were not. They involved extensive reporting of disputes that emerged as clerical authorities in dioceses and Catholic universities struggled to cope with activists energized by Vatican II. John gave plenty of space to all contending sides, especially in analyses of what eventually became his stamping ground, higher education. John’s more pugilistic style showed itself not in Commonweal but in The National Catholic Reporter, whose founding editor, Robert Hoyt (later a senior editor at Commonweal), lined up John as a liberal Catholic columnist sparring with the conservative Garry Wills. Those old enough to have marveled at post-sixties ideological criss-crossings know how that turned out.

One possible turning point for John at Commonweal was the addition, in October 1965, of “News & Views,” a page of brief items, some pointed, some wonderfully inane, like a Catholic college’s announcement that evening rosary on Wednesdays and Thursdays would be postponed “so that no one need miss Batman on TV.” Appearing on page two, inside the cover, it was created in part to rival “Cry Pax!”, a front-page National Catholic Reporter column of amusing bits that Hoyt culled from Catholic sources. “News & Views” brought out John’s talent for swordsmanship delivered with the light touché. On a few later occasions when I took over the spot, the result was heavy-handed and anything but Leo.

That was after John left Commonweal to take a position covering the “intellectual” beat for the New York Times and then on to a long and lively career as a writer, for more than a decade, of the “Behavior” section at Time magazine. After that, he was a columnist for seventeen years at U.S. News & World Report, and finally a senior fellow at the conservative-libertarian Manhattan Institute, where he oversaw an online chronicle of liberal academic follies and gleefully handed out an award for the year’s most cowardly university president.

By that time, John had shaped his career around skewering political correctness, the begetter of Woke. It was territory he knew firsthand, having done a stint as a public-affairs official with the high-minded but politically hapless New York City mayoralty of John Lindsay, followed by rounds as a media columnist at the Village Voice and a books editor at Society, a social-science journal. For a blink of an eye he was an editor of Scanlan’s Monthly, a 1970 venture in gonzo left-wing muckraking led by Warren Hinckle III and Sidney Zion. John was to be their seal of Catholic uprightness, he explained to me. In fact, he bolted before the first issue, and Scanlan’s collapsed within a year under FBI investigation.

I saw or heard from John only intermittently after his Commonweal years. He probably recognized my regret that he was focusing so much of his talent on this one slice of the nation’s problems. A diet of disinfectants, no matter how superbly prepared, is not nourishing. But John knew my strong belief that Catholic higher education should not surrender its distinctly Catholic character to the homogenizing pressures of conventional liberalism and the academic marketplace. So he would phone to pick my brain about some campus liberal folly that he was tracking. Usually, however, my campus experience was just too limited to confirm whether this menace was or was not the Godzilla he imagined. And if perchance I suggested that some Exhibit A was simply not so simple or representative as he thought, John would interrupt with “Always the Commonweal editor, Peter!” After that, I was never sure whether he was still listening.

For days gone by! May he rest in peace.

Great Is the Truth