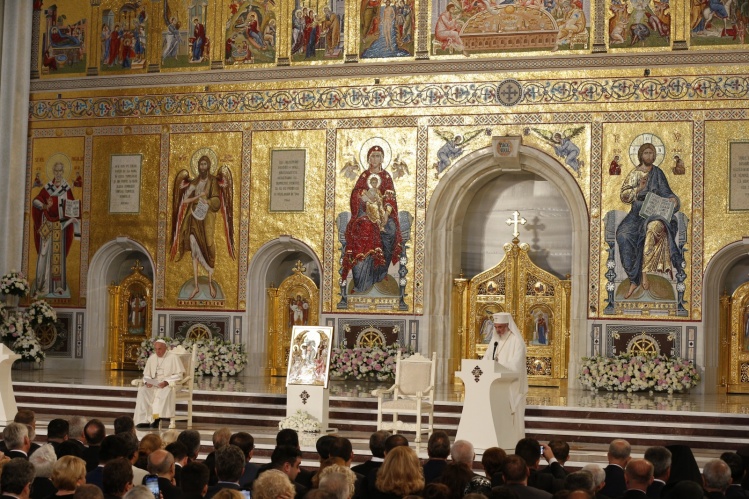 I didn’t expect to take too much interest in the Pope’s trip to Romania (a three-day visit beginning on May 31), but then I saw the video produced by the Catholic Archdiocese of Bucharest to promote the Pope’s visit. It took me by surprise because it was so uplifting. (Watch the video below.)

Preliminary news reports concerning the agenda for the visit focused on fairly dark themes. There will be a beatification of several Catholic bishops who were martyred during the Communist period. Gloomy reports of simmering tensions between the Orthodox majority and the Greek (Byzantine) Catholic minority, especially those concerning disputes over Catholic churches that were seized during the Communist period, are in the air. Pope Francis wants to build better ecumenical relations through the visit, but some are pessimistic, saying Francis will never get the positive reception that Romania gave to John Paul II when he visited twenty years ago. Catholics are a small minority, not always respected by their Orthodox compatriots.

That’s the view from above. But the video, in contrast, offers a view from below, of a lively, joyful, Vatican II church. A sort of cross between a parish facebook and a promotional video, it takes the theme of the papal visit, “Let’s Walk Together,” and runs with it. The people in the film are not at all glamorous. But that’s precisely why it’s charming. It could be a parish. It probably is somebody’s parish. The film is expertly shot and edited. But because it includes so many people who are ordinary-looking, the polished videography never aggrandizes or idealizes its subject. They may be singing a song that puts their best foot forward, but they remain themselves. The video was made for internal consumption within Romania, not for export (the English subtitles were only added later). These images were deliberately chosen to edify and encourage its intended viewers at home.

Joy is something rare in the American Church today, as we seem to be perpetually engulfed in conflict and wearied by the ongoing scandals associated with clerical abuse.
sharetweet

The Catholic population in Romania (both Greek and Latin Rites combined) currently amounts to five percent, while eighty-six percent of Romanians identify as Orthodox. Romanians across the board share a degree of religious practice that is surprising in a country ruled for forty years by an atheist regime that was intent upon controlling religious practice and suppressing belief. During that period, churches were razed, public expressions of religion forbidden, churchgoing monitored by the secret police, and religious education and theological study banned from schools. Advancement in society depended on acceptance of the atheistic ideology, and religious practice was frowned upon even when tolerated.

In spite of this, Romania now ranks first in religious commitment among all European countries, with fifty-five percent of adults rated as “highly religious,” according to the Pew Research Center. A detailed study by Irina Stahl evaluating multiple data sources from 1990–2015 (“The Communist Impact on Religion in Romania,” Ethnologia Balkanica 21, 2018) showed that Communism clearly did not succeed in stamping out religion in Romania, but rather forced it underground. Religion rebounded after the fall of Communism.

Not only religious identity, which is frequently associated with nationalism in post-Communist countries, but also Christian belief and practice surged in Romania after 1989.  This proved not to be a fad; it remained high thereafter, and even grew stronger. In response to the question, “How important is God in your life?” the share of respondents who answered “very important” grew from forty-four percent in 1998 to seventy-two percent in 2015. In answer to the question “Is life meaningful because God exists?” by 2015, ninety-one percent said yes.

Stahl adduces impressive data to show how widespread Christian religious practice and belief actually are in Romania today. The studies she analyzed show that ninety-six percent believe in God; forty-six percent attend church services at least monthly; ninety-seven percent pray; eighty-one percent confess their sins at least once a year; seventy-seven percent give donations to their church, and considerable numbers participate in devotional practices such as pilgrimages, celebrations of the saints, blessings, and the veneration of icons.

One could, of course, criticize the vision of church the video represents. It celebrates family, prayer, togetherness, and celebration but gives little indication of the works of mercy or the mission to build a just society. The video is aspirational with respect to church life, obviously; no one could be this upbeat all the time. Nevertheless, as a statement of “heart,” it could not be more attractive. The overwhelming affect projected in the video is joy.

It’s hard not to feel a little wistful seeing this. Joy is something rare in the American Church today, as we seem to be perpetually engulfed in conflict and wearied by the ongoing scandals associated with clerical abuse. As ideologies, resentments, polarizations, and problem-based analyses have grown increasingly common, any positive general feeling about the Church is regarded as naïve by many. Even a future hope of “walking together in faith” seems elusive when one considers that we are now hearing calls from one side to depose Pope Francis, and from the other to abolish the priesthood.

And yet, the message of this song from Romania resonates. It stands as a reminder that a durable faith can be—and indeed must be—a joyful faith.