The State of Unions
By The Editors
Editorial
Domestic Affairs
Economy 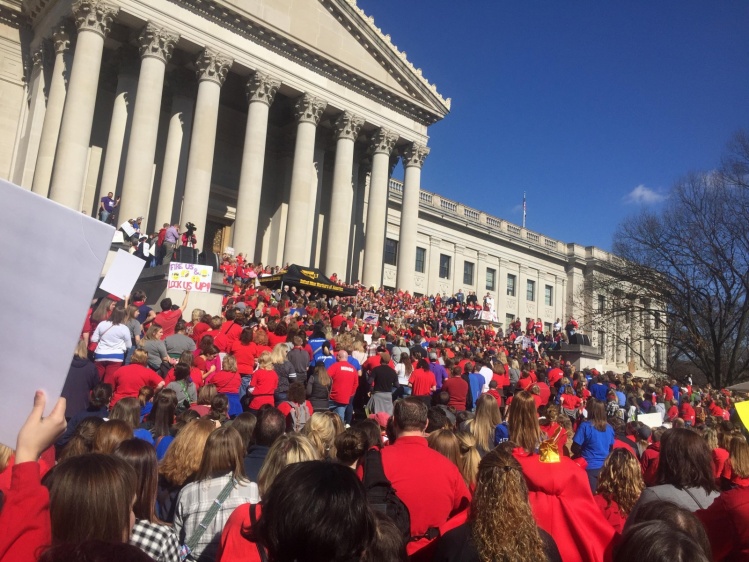 Nearly three decades ago, the labor lawyer Thomas Geoghegan determined it had become “insane” for American workers to go on strike. Observing the weakening of organized labor during the Reagan and Bush years, and the failure of numerous high-profile stoppages to achieve their aims, he gloomily concluded: “Every strike ends in disaster.” Unions grew increasingly reluctant to resort to walkouts, and since then, as Jake Rosenfeld wrote in What Unions No Longer Do (2014), “labor’s most powerful and prominent weapon in wage and benefit negotiations has nearly vanished from the American economic landscape.”

But public-school teachers in West Virginia recently issued a reminder of just what a well-executed, wide-scale walkout can accomplish. Without collective bargaining powers or the legal right to go on strike, some twenty thousand teachers left their jobs in early February to protest stagnant wages, dwindling benefits, and cuts in education funding. It was one of the rare statewide teacher strikes in U.S. history, and its size and scope proved critical. Drawing on their state’s ancestral tradition of coalminer activism, strikers took an “all-in-or-nothing” approach, while using social media and crowdsourcing tactics to ensure solidarity among far-flung union members and win support from the public. Notably, a decentralized rank-and-file made up mostly of women managed the effort, sidestepping a cautious and seemingly slow-footed leadership to get what they wanted—not least, a 5 percent raise. It was a strategy that reportedly flummoxed legislators who were convinced a strike couldn’t possibly be mounted, much less succeed.

That success has not gone unnoticed in states (many red) where years of tax and budget cuts, hostility to public employees, and disdain for the common good have exacted a damaging toll. Public-school teachers in Oklahoma, who have not received a raise since 2008, are set to strike on April 2, seeking not just better pay but also an end to decades of cuts in instructional funding that have scaled back academic offerings and eliminated numerous extracurricular programs. Teacher unions in Arizona and Kentucky have amped up their demands for pension protections and more educational funding. Importantly, residents of these states increasingly view the protests favorably, which seems to be getting the attention of elected officials.

Union membership has been in decline for decades, and today, only 6 percent of America’s private-sector workforce is unionized.
sharetweet

The fortunes of labor also appeared to get a boost with the victory of Democrat Conor Lamb in a recent special election in Pennsylvania’s eighteenth congressional district. Lamb, as an approving Joe Biden said at a campaign event, “is not afraid to say the word ‘union,’” and indeed, the candidate made a point of reaching out to organized steelworkers and coalminers, who make up 20 percent of the district’s electorate. Reminding voters that a statue of a union founder stands in his hometown Catholic church, Lamb has promised to protect pensions and benefits and to fight right-to-work legislation, which prevents unions from requiring workers to pay dues.

These are welcome developments, yet the overall picture remains sobering. Union membership has been in decline for decades, and today, only 6 percent of America’s private-sector workforce is unionized. Of those in the public sector, slightly more than 30 percent are unionized, but twenty-eight states have enacted right-to-work laws, and many others have stripped public employees of collective-bargaining powers. Now the biggest threat to organized labor comes from the Supreme Court. In February, it heard oral arguments in Janus v. American Federation of State, County, and Municipal Employees, a challenge to the right of public-sector unions to charge compulsory fees to support collective bargaining. The U.S. bishops have filed an amicus brief on behalf of AFSCME, citing the encyclical Caritas in veritate in noting that right-to-work laws “represent a governmentally imposed ‘limit [on] the freedom or the negotiating capacity of labor unions.’” The court split four-four on a similar case following the death of Justice Antonin Scalia in 2016, but with the arrival of Justice Neil Gorsuch, it is all but certain to side with the plaintiff when it rules on Janus in June. Many experts say the decision will have a devastating effect on public-sector workers.

In a March address at Seton Hall University, AFL-CIO president Richard Trumka forcefully reminded attendees of the prophetic, innovative mission of unions. Now would seem the time to embrace that mission with renewed purpose. West Virginia’s teachers offer both a practical and inspirational example. Courageously proclaiming the dignity and importance of their work, fueled by grassroots political energy, they showed how to operate outside outmoded structures while harnessing new tools for mobilization and communication. This might be a template for meeting the challenges that now threaten the very existence of organized labor.