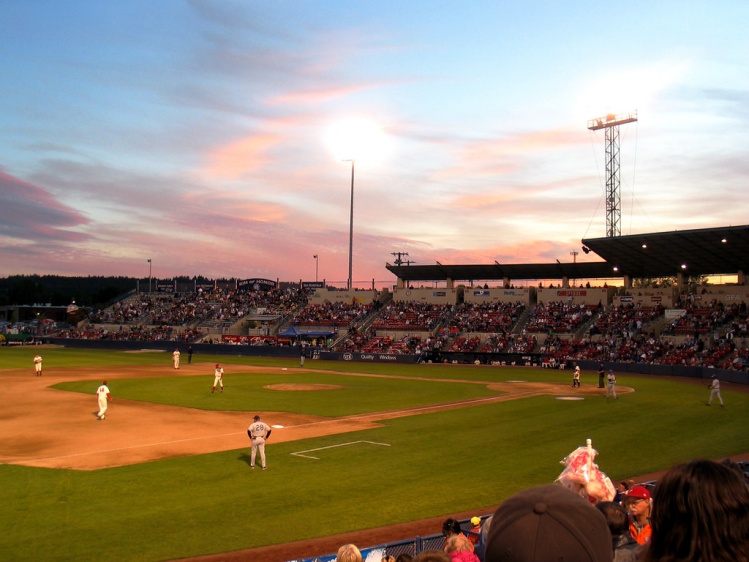 Every year I look forward to watching Louisville’s Triple-A baseball team, the Bats, play in one of the nicest ballparks in the minor leagues, Slugger Field. It was built in 1998 amid a resurgence in designing ballparks to look more like they did during the golden age of baseball in the mid-twentieth century. However, on a spring day three years ago, I noticed something had changed. Over the center-field wall was a pitch clock, which reset after every pitch and gave the pitcher only a limited period of time to throw the ball.

The pitch clock over the center-field wall at Slugger Field bothered me because, of all the major sports in North America, only baseball is (or, rather, was) untimed. Baseball has the eternal built into it, from the circular nature of each player’s voyage around the base paths to its refusal to have the game limited by the constraints of time, and the pitch clock introduced something alien to the game, like a virus that couldn’t but compromise the health of something that was otherwise healthy and beautiful.

Baseball introduced the pitch clock to the minor leagues in 2015 in response to concerns that the average American finds baseball slow and boring. Since he took over as the commissioner of Major League Baseball, Rob Manfred has displayed an almost obsessive concern over baseball’s “pace-of-play” problem, arguing that the games are taking too long to play and that there are too many breaks in the action. In February he said that his concerns about the game’s pace are rooted in fans perceiving the game as slow. “Pace of game is a fan issue,” he said. “Our research tells us that it’s a fan issue. Our broadcast partners tell us it’s a fan issue.”

Major League Baseball has made more changes for the 2018 season, which begins on Thursday. There will now be a limit on the number of visits to the pitcher’s mound by players and managers, and in the minor leagues, pitchers will have only fifteen seconds to begin pitching the ball, instead of twenty. The pitch clocks aren’t going away.

The commissioner isn’t wrong to have concerns about baseball’s popularity. According to a recent Gallup poll, baseball is less popular than it ever has been, with only 9 percent of Americans saying it is their favorite sport to watch, in comparison to the 37 percent of Americans who list football as their favorite. Most troubling of all is that baseball’s fan base is aging. While baseball is the second-most popular sport among fans fifty-five years old and older, it is the least popular sport among those 18-54 years of age, behind football, basketball, and soccer. Older fans are not being replaced by younger ones.

I don’t deny that there are beauty and complexity in other sports, but baseball has a contemplative dimension that simply isn’t a feature of other games.
sharetweet

It’s strange that the commissioner has focused his attention on pace-of-play, as if shortening the length of a baseball game by 15-20 minutes will suddenly result in younger fans streaming through the turnstiles. They talk as if baseball’s lack of popularity is because the game is broken, and if only it can be fixed, baseball can be saved. Perhaps more thought needs to be given to the idea that maybe baseball’s popularity problem isn’t a consequence of a broken game, but of a society whose ability to enjoy the leisure of baseball has atrophied.

I don’t deny that there are beauty and complexity in other sports, but baseball has a contemplative dimension that simply isn’t a feature of other games. It has within it what Bart Giamatti, the late, great former commissioner of baseball, called deep patterns—“three strikes, three outs, three times three innings, and its deepest impulse, to go out and back, to leave and to return home”—that have the potential to resonate deeply within those who choose to see and experience them.

A baseball game can have thrilling moments, but baseball isn’t a sport designed to be exciting. It’s a pastoral pastime. There are long pauses built into the game, and times during which the casual observer thinks there is nothing happening but when, in fact, a great deal is going on. Its pace is leisurely and quiet, its movements subtle. And to those who allow themselves to lean into its rhythms, a baseball game can quiet the mind and be an almost transcendent experience.

In his book, Leisure: The Basis of Culture, the 20th-century German Catholic philosopher Josef Pieper argues that Western culture has lost the meaning of leisure, focusing instead on an existence dominated by work. He was writing in a different context than our own—post–World War II Germany—but his arguments are no less relevant today. Pieper laments that human beings have identified themselves so thoroughly with their work that they have ceased to devote themselves to any kind of contemplation that allows them to more fully comprehend reality in its totality. We are capable of such contemplation, but contemplation requires leisure.

Pieper is clear about what leisure is and what it is not. Leisure is not idleness, nor is it the “busyness” of keeping occupied during one’s downtime, “the inevitable result of spare time, a holiday, a weekend or a vacation.” It is “not the attitude of mind of those who actively intervene…not of those who grab and grab hold.” In other words, leisure does not involve being entertained at a sporting event or getting immersed in a team’s performance through the busyness of fan participation. Screaming at the top of one’s lungs while the opposing football team has the ball or chanting slogans of support for one’s soccer team are both great fun. But neither are leisurely.

According to Pieper, leisure is instead “a condition of the soul,” an “attitude of inward calm, of silence” that “means not being ‘busy,’ but letting things happen.” Leisure, he writes, is “a receptive attitude of mind, a contemplative attitude.” And such leisure is possible, Pieper argues, only for the person who “is at one with himself,” who is content simply to be. It is impossible for those who have a “deep-seated lack of calm.”

Instead of slowing down, we demand more action and noise, more entertainment, and more distraction from the questions of meaning that we don’t want to address.
sharetweet

One need only follow the news to notice the “deep-seated lack of calm” that characterizes debates about politics, the church, and, well, just about everything. But even apart from that, our lives are increasingly dominated by the seemingly endless demands of work, and even our downtime is often spent being entertained and distracted. We are as busy in our supposed leisure as we are in our jobs.

Is it any wonder, then, that we in the United States are losing interest in baseball, a sport characterized by deep patterns that require a more contemplative approach to be appreciated? Instead of slowing down, we demand more action and noise, more entertainment, and more distraction from the questions of meaning that we don’t want to address.

In such a culture, a game of subtle rhythms, a pastoral and leisurely game, isn’t going to make the cut, which is why the commissioner is bent on trying to make it more like other sports. Think baseball is too boring? We’ll fill the time between innings with games, noise, and kiss cams! Think baseball games are too long and unexciting? We’ll introduce pitch clocks and rules to make the game exciting and fun!

But no matter how many changes are made, baseball cannot be anything but what it is, and until the powers that be realize this, baseball’s decline will continue.

So might I, a theologian and fan of the game, make a modest proposal to Commissioner Rob Manfred? Don’t run from baseball’s leisurely pace. Embrace it. Teach about it. Market it. Pieper argues that human beings are created for contemplation, for wholeness. The “power to achieve leisure is one of the fundamental powers of the human soul,” Pieper writes, and the “power to know leisure is the power to overstep the boundaries of the workaday world and reach out to superhuman, life-giving existential forces that refresh and renew us.” No matter how distracted we are, we know intuitively that there are deep patterns within us and without us, and that happiness is in some way connected to our discovery and contemplation of them.

Pieper rightly argues that we can only achieve genuine leisure in connection with divine worship, that is, out of a comprehension of our ultimate purpose in relationship to God. But even apart from this theological framework, surely the game of baseball as it is has something to contribute to a society of people who (maybe without even knowing it) both need and want the cyclical rhythms and pastoral pace of a game that doesn’t entertain so much as provide opportunities for training the contemplative gaze.