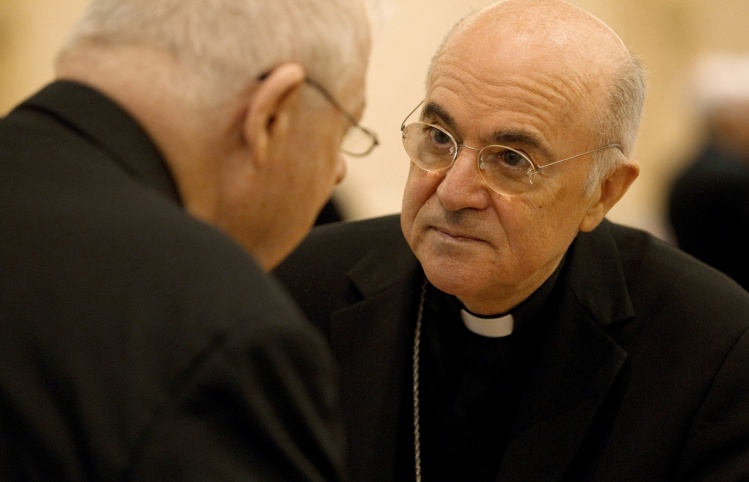 The disclosure before Congress of further evidence that Donald Trump planned the assault on the Capitol raises disturbing questions about the role the Holy See’s former ambassador to the United States, Archbishop Carlo Maria Viganò, played in inciting the president’s followers.

Two days ahead of the January 6, 2021 attack, Trump advisor Steve Bannon released an interview in which Viganò declared, “It would be an irreparable disaster if Joe Biden, who is heavily suspected of being complicit with the Chinese dictatorship, would be designated as President of the United States.”

Bannon asked Viganò what advice he’d give to “recalcitrant politicians” at a time when “average Americans are fighting to expose the massive and coordinated theft of our election.”

“Each one of us has a role that Providence has entrusted to us, and which it would be culpable to shrink from. If the United States misses this opportunity, now, it will be wiped out from History,” Viganò claimed. “If it allows the idea to spread among the masses that the electoral choice of the citizens—the first expression of democracy—can be manipulated and thwarted, it will be complicit in the fraud.”

The renegade archbishop’s support for Trump’s Big Lie was well known at the time, but the House Select Committee on the January 6 Attack on the Capitol has provided some troubling context for the interview as it delves into Bannon’s role. At the July 12 hearing, the panel said White House records show that on January 5—the day after Bannon’s interview with Viganò came out—Bannon spoke twice with Trump by phone, and afterward appeared to have at least some knowledge of Trump’s plan to stop Congress from certifying Biden’s victory in the 2020 presidential election the next day.

Bannon did indeed rally the troops in his January 5 podcast. “We’re on the cusp of, the eve of a great victory of this republic if we just run the play,” he said. Now, the House panel wants to find out from Bannon if Trump had told him what “the play” would be on January 6; Bannon’s refusal to testify led to his indictment on a criminal contempt charge.

In the critical days just before Trump’s backers gathered outside the Capitol, Viganò’s interview served as a tool for Bannon and Trump as they used lies about the election to assemble and inflame the crowd that gathered outside the Capitol on January 6. It was quickly re-published on a broad range of far-right Catholic websites which, taken together, have a large audience of committed followers: Church Militant, Lifesite News, Catholic Family News, Crisis Magazine, and the Remnant newspaper, where the editor tweeted the interview with the message, “BREAKING NOW: Steve Bannon interviews Archbishop Viganò This is serious counterrevolution in action. Please read and SHARE.”

Viganò was positioned to be an especially potent weapon for the effort to scuttle the election.
sharetweet

Conspiracy-mongering “news” website the Gateway Pundit ran a transcript of the “important and timely” interview. Jack Posobiec, a far-right media figure, tweeted it to his 1.8 million followers. Representative Paul Gosar, a far-right Republican from Arizona, tweeted a key quote from the interview.

Viganò was positioned to be an especially potent weapon for the effort to scuttle the election based on the phony fraud charges, which he embraced. His periodic statements on American politics framed the contest as an apocalyptic battle between the forces of good and evil.

As Trump and allies built up their hype over the “will be wild” rally at the Capitol on January 6—as Trump had fatefully tweeted—a Twitter account under Viganò’s name posted relevant excerpts from the archbishop’s inflammatory statements frequently during the run-up. The account’s home page states flatly that “I’m not Abp Viganò,” but responses to the posts indicate that some of the followers were not aware of that.

The pinned tweet, posted on the morning of January 5, is a blessing of sorts copied to Trump. It begins, “Together we are all united in prayer and in the holy battle which we are called to fight.” Among the first responses was one user who replied, “I was stricken with fear but now fully clothed in the armour of God I feel invincible and ready to FIGHT.”

Viganò has been destroying whatever credibility his status as a former diplomat and Vatican official might have provided ever since he went public in 2018 with sensational, unproven charges against Pope Francis and various bishops that—it should have been clear immediately—were skewed by ideology and resentment. Influential conservative Catholic media such as EWTN promoted him for a while, but over time his theories became so bizarre and unsupported that he was left with only the far-right and far-far-right media to spread his claims. Perhaps that was the Vatican strategy for dealing with him.

But he has built a large audience through fringe media. As bizarre as the Viganò saga has been, we cannot ignore that an archbishop of the Catholic Church actively assisted Bannon with his lies at a key moment and thus played a role in what is looking more and more like a criminal attempt by Trump to stage a coup. It’s an embarrassment to American Catholics that a man the Vatican had dispatched to the United States has labored so hard to make our politics toxic—and that the Vatican and most American bishops respond to his lies with silence.