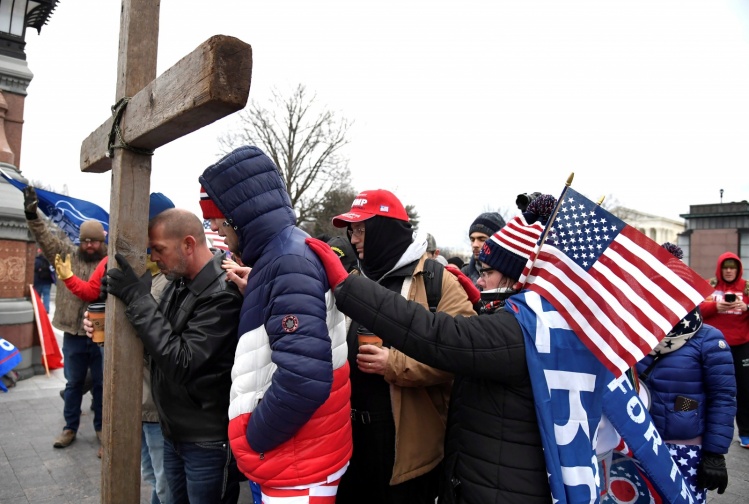 Supporters of President Donald Trump join in prayer in Washington D.C. before the riot at the U.S. Capitol, January 6, 2021 (CNS photo/Mike Theiler, Reuters).

Taken together, LifeSiteNews and Church Militant garnered nearly 10 million visits to their alt-right “news” websites during the last three months of 2020—a pair of powerful platforms that helped spread bogus election-conspiracy claims to a huge Catholic audience.

Along with other far-right websites that cater to Catholics, they pulled out the stops for President Donald Trump, even as he incited his followers to storm the Capitol on January 6. In the midst of the violence, their coverage was promotional; Church Militant went so far as to use Catholic imagery to glorify the rioters. Afterward, there were no apologies.

For the most part, these supposedly Catholic websites haven’t received the scrutiny they deserve. Targeted at Catholics, a swing vote, they serve up a potent mix of traditional piety and populist politics. According to data gathered by SimilarWeb analytics, LifeSiteNews in particular is among the most visited in the “competitive landscape” of faith and belief websites. Bishops have been reluctant to criticize such sites—whether because of their influence, the bitterness that the sites apply to perceived enemies, or the hope that they’ll go away. News media don’t pay much attention to their influence either, with some exceptions.

But their boosterish coverage of Trump’s attempt to subvert the presidential election should heighten alarm about what they are up to. And, it should be noted, they do have their champions in the Catholic hierarchy. In particular, they’ve showcased a certain former Vatican ambassador to the United States who treats the unproven election fraud claims as an article of faith.

That comes through in Church Militant’s coverage of the riot. As chaos permeated the Capitol at 3:30 p.m., Church Militant tweeted a meme with two photos: to the right, U.S. Marines raising the American flag at Iwo Jima; to the left, a parallel image of a group of people raising a cross at a Trump rally. Twenty-one minutes later, Church Militant tweeted a photo of a man holding up a statue of the Infant of Prague in the midst of the confusion at the top of the Capitol steps, surrounded by a burst of golden light.

At Church Militant, rioters are patriots. “Patriots furious at marxist media continually feeding them lies and ignoring 80 million [sic] votes for Trump,” senior producer Christine Niles tweeted in her description of rioters who were threatening journalists. On-scene social-media coverage celebrated the mob’s advance: “Fences fall as people angry with the steal rush the Capitol,” at 2:43 p.m.; “Election steal protesters break into the Capitol” at 3:08 p.m. “HERE’S 1776,” another meme declared.

LifeSiteNews...[is] adept at promoting Christian nationalism under the guise of journalism.
sharetweet

Likewise at LifeSiteNews, which was adept at promoting Christian nationalism under the guise of journalism. From its name to its sometimes-snappy news stories and well-produced videos, the website looks like news—but news that tells only its side of the story. The site’s editors wear that imbalance like a medal: “We’ve been suspended by YouTube twice and our site has been labeled as fake news by Facebook, but that doesn’t stop us,” they said in an article posted the morning of the Save America rally. “In fact it means we’re doing something right.”

When it comes to telling one side of the story, LifeSiteNews can be pretty effective. A day ahead of Trump’s rally, it set the tone with video interviews of Trump supporters—only Trump supporters, of course—who had come to Washington. A lone electric guitar plays “The Star-Spangled Banner” in the background. (No, it doesn’t sound anything like the version Jimi Hendrix played at Woodstock.) The video is called “America at stake: Huge pre-rally turnout in DC for Trump.”

LifeSiteNews coverage the day of the riot was breathlessly enthusiastic. As a crowd gathered to hear Trump speak, a LifeSiteNews correspondent said he knew “at least a million people” were on hand. (The Associated Press put the number at several thousand.) “It’s just a wonderful spirit, to be around a million patriots.”

That portrayal continued as the “patriots” marched on the Capitol, with periodic tweets noting their progress. A video of rioters trying to bull their way into the front door of the Capitol, wielding clubs, only to back away because of tear gas, was put to what sounded like the score of a Hollywood movie at the moment the protagonist overcomes all.

Despite the violence, LifeSiteNews applauded the day’s events. “Instead of being polite and allowing themselves to be steamrolled, those whom Washington elites view as ‘deplorables’ did something that got the attention of the nation and the world,” said one of its writers. The violence wasn’t their fault. “Today’s violence at the U.S. Capitol is not an isolated incident,” Gualberto Garcia Jones, a vice president at LifeSiteNews who was in Washington that day, wrote on the site. “It is the result of ever increasing and ever oppressive state-sanctioned lawlessness that has only ever become a matter for debate to the political class but which is becoming intolerable to mainstream America.”

Church Militant and LifeSiteNews were not the only right-wing Catholic media to admire the rioters. After rioters were inside the Capitol, Raymond Arroyo of EWTN tweeted that “This all has a Les Miserables air about it.” Perhaps that implied support for the anti-clerical French revolutionaries? He later deleted the tweet and instead posted that “The violence at the Capitol is disgraceful and should be condemned.”

At OnePeterFive, another conservative Catholic site, Steve Skojec complained of “the gaslighting that’s going on in an attempt to make people who suspect election fraud appear delusional.”

Catholic Family News didn’t cover the riot, but like LifeSiteNews, Church Militant, and Arroyo’s The World Over program at EWTN, it has given over its platform to that certain former Vatican ambassador, Carlo Maria Viganò. Catholic Family News was “honored” to reprint an interview Steve Bannon did with Viganò, whose election-fraud claims go hand-in-glove with his disproven conspiracy claims involving Pope Francis and bishops loyal to him.

For many in the audience, this kind of one-sided “news” offered in the name of the Catholic faith can be very persuasive: they are looking for answers. One young man described as one of the first to breach the Capitol put it well in an interview with LifeSiteNews. “You come to the end of your rope and you say, ‘What else am I supposed to do?’... All of a sudden it’s not the logical mind that’s working anymore,” the man, identified as Leo Kelly, said. “You’re just reacting.”