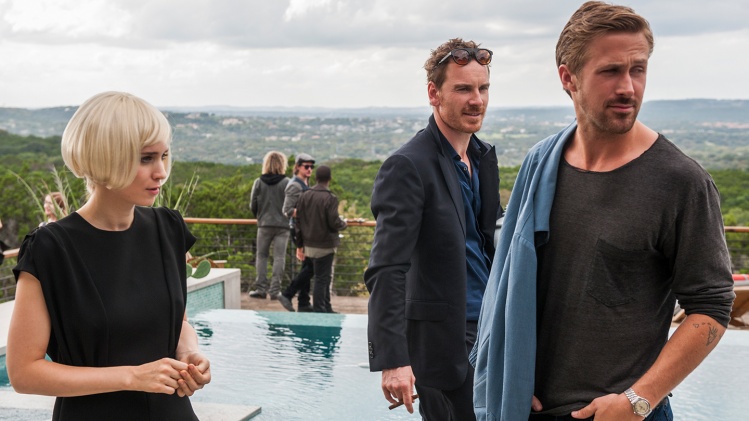 Three actors in search of a movie: Mara, Fassbender, and Gosling in ‘Song to Song’ / Photo courtesy Broad Green

At least two people got up and left during the showing of Terrence Malick’s Song to Song I saw on its opening weekend in New York. It pains me to admit that I was tempted to join them.

As a years-long, slightly obsessive devotee of Malick’s work, I share (so far as I can tell) many of his intellectual and religious preoccupations. When it comes to artists I follow, I tend to be an indulgent reader, listener, and viewer: “Let Malick be Malick” has been my refrain as his last few efforts have grown increasingly challenging and oblique. And Malick’s distinctive aesthetic is one I embrace: the fleeting glimpses of people’s lives, the carefully rendered shots of nature, the breathy voiceovers—you either like them or not. I do. Or at least, I have in the past.

Song to Song clocks in at just over two hours, but it felt closer to three or even four. The film follows a handful of characters and their intertwined exploits—business and pleasure—against the backdrop of the Austin, Texas, music scene. There is Faye (Rooney Mara), an aspiring musician who tries to sleep her way to a record deal, mainly with Cook (Michael Fassbender), an industry bigshot. She eventually dates BV (Ryan Gosling), a young singer-songwriter Cook wants to take to the top. But BV later finds out about Faye’s sexual entanglements with Cook, and the couple splits. BV then shacks up with Amanda (Cate Blanchett) for awhile and Cook ends up marrying Rhonda (Natalie Portman), a former kindergarten teacher he meets while she’s waiting tables at a diner. Faye has an interlude with Zoey (Bérénice Marlohe) that I think is explained by Faye’s fondness for picking lovers in part by how much she fancies their abode, but I can’t say for sure. Finally, disillusioned by the music industry, BV leaves it all behind to work on an oil rig, getting back with Faye and living a life of small-town simplicity and domestic tranquility.

(The film, I should add, doesn’t use any of these names—not one of them is ever spoken out loud. But I did look them up so I could avoid endlessly repeating formulations like, “Ryan Gosling’s frequently-mumbling character” or “the waitress played by Natalie Portman…”)

Despite apparently taking place in Austin, with many backstage scenes at the Austin City Limits music festival (or is it South by Southwest?), we see very little live music, at least directly or at length. We do see Val Kilmer as a crazed rock star who takes a chainsaw to the large speakers behind him on the stage—a bracing if somewhat unaccounted-for cameo. Iggy Pop likewise makes a few appearances, to great effect. Malick, having discovered a new use for handheld cameras, also takes us inside the festival crowd’s frenzied mosh pits, though that ends up being little more than a fleeting aesthetic diversion. For the most part, we see musicians and celebrities backstage, at parties, on couches—which sometimes gives Song to Song the feel of a documentary, the subject of which you keep trying to guess.

Oddly, the film’s soundtrack has almost nothing to do with the music festival we see going on. Why make a film that takes place amidst Texas music festivals, only to piece together a soundtrack disconnected from all that? Despite the film being something of a love letter to Austin, almost none of the music we hear is connected specifically to the city’s music scene, past or present—no cowboy poetry, no honky-tonk heroes warbling sad songs, no tears-in-your-beer tunes, no Texas-frat country-rock anthems.

Other confusions abound; the film never really comes together. Perhaps this is because there is no through-line, nothing around which Malick’s spliced-and-diced scenes can cohere. In his previous three efforts, Tree of Life, To the Wonder, and Knight of Cups, he did offer modest concessions to the viewer and to storytelling: Tree was a deep-dive into the experiences of one family; Wonder was held together by a love triangle; and Knight was centered on the experiences of a single man, Rick, played by Christian Bale. Song to Song, by contrast, flits among at least four “narrators.” It’s why the film’s most successful sequences are nearly-self-contained set pieces—see, for example, Faye, BV, and Cook’s jaunty trip to Mexico before their trio is smashed apart by sex and jealousy. Otherwise, Malick’s admission that the first cut of this film was eight hours long should be taken chiefly as a warning.

The great exception to these missteps and disappointments is Patti Smith’s absolutely glorious turn as, well, herself—charismatic, spiritually alive, and vulnerable all at once. We do get to hear (but not really see) her perform near the end of the film, and Malick gives her as many spoken lines—not voiceovers—as almost any recent “character” of his that I can recall. She dispenses wisdom on love and commitment, romance and marriage, and to the extent Song to Song features any explication of its themes, it is because of her interventions. Smith is by far the most engaging person you see on the screen during the film; the moments in Song to Song with the most emotional depth undoubtedly are when she, playing with a wedding ring on her finger, talks about her real-life husband, Fred “Sonic” Smith. She still wears the ring, even though he’s been dead since 1994.

Sex and love, and how we pursue them and they pursue us, are Malick’s preoccupations in this film, as was the case in both Wonder and Knight. This time, though, he manages to make sex and love boring. His characters stalk around the bedroom, circling each other like boxers in a ring. Frankly, it looks silly most of the time—far too stylized and stilted, and marred by voiceover lines that left me on the verge of giggling: “I played with the flame of life,” goes one lament about having too much sex. But genuine “play,” I’m afraid, has nothing to do with it. Malick’s voiceovers tend to emerge in one of two modes, the philosophical-spiritual aphorism or the fortune-cookie cliché. Be warned: Song to Song has an especially high quotient of the latter.

Of course Malick probably intends for some of the sex to seem boring, or at least mechanical and joyless. But instead the film simply lacks eros, which renders it finally pointless. We never really learn enough about the characters to care; the film is just too incoherent for their desires to seem real, to drive the story forward. Song to Song sometimes feels like an old man with some regrets decided to work out his hang-ups on film—again!—but kept getting distracted by Rooney Mara’s midriff and lost the thread along the way. When BV and Faye reunite—that is, when they seem to renounce their decadent lives on the make in Austin’s music scene—I simply didn’t care. It didn’t matter, because there was no real allure to how we saw them living before. We never feel their longings, or understand what truly moves them.

Song to Song doesn’t climax; it only ends, which comes less as relief than as surprise you’re still awake.

They're Right, We're not a Christian Nation