Whenever I read a Vatican statement on the role of women, I conduct a thought experiment. I imagine that I know nothing whatsoever about the Roman Catholic Church or its faithful. If this document were my only source of information, I ask from behind my ecclesial veil of ignorance, what basic conclusions might I draw about women in the Church? I’ve done this mental exercise with dozens of texts over the years, and one conclusion surfaces over and over: women are all exactly the same.

It’s a rather astounding conclusion to draw about a tradition populated all the way down by women who lived and died in wild and unique ways—shaving heads, chronicling visions, leading armies, renouncing fortunes, forswearing marriage, and birthing God, to name a few highlights. Yet there is little in Church teaching on women that does not appear to proceed from a fundamental illusion that women—the billions of us—constitute some sort of monolithic, quasi-theoretical body with an articulable essence, singular vocation, and narrow set of essentialized gifts. A sociologist attempting to devise a typology of women in the Church based on magisterial writing would, in the end, not find much to differentiate in the single category of “women.” This is the governing imagination behind Pope John Paul II’s notion of the “feminine genius.” But it also shapes, if less obdurately, Pope Francis’s comments on women, though one can trace real evolution since his early pontificate. In any case, the result is exaltation through condescension. Even the most well-intentioned statements on women in the Church bear the unmistakable hint of the male CEO who calls his female secretary “the real boss” and sincerely believes it’s a compliment.

On October 27, the Vatican issued the Working Document for the Continental Stage (DCS) of the ongoing Synod on Synodality. Prepared over two weeks by an international group of laypeople, religious, and clergy under the direction of the general secretariat of the synod, the document synthesizes hundreds of reports from the synod’s consultative phase—local reports from nearly every bishops’ conference as well as lay associations, religious superiors, dicasteries, online communities, and individuals and groups throughout the world. The DCS is not a declaration of conclusions but a sort of working snapshot of the polyvocal sensus fidei, meant to be used as a source for the synod’s next phase. Its release was met with fascination, even emotion, because it concretized what, until this point, has felt to some like a nebulous process. The document’s tone is forthright, warm, and non-defensive. As I read it, I imagined the committee responsible for its creation offering it to the Church on open palms.

When I reached the subsection of the DCS titled “Rethinking women’s participation,” I conducted my usual thought experiment. And for the first time, I was surprised.

The document suggests a sense among the faithful that the status quo not only represents a problem for women but, fundamentally, for the mission of the Church.
sharetweet

The synod is an exercise in ecclesial listening. Synodal listening is not, the document clarifies, merely an “instrumental action,” a wildly complicated multi-year public opinion survey. To listen is to emulate God’s own fundamental disposition toward God’s people. When it comes to the status of women in the Church, we will know that such listening has been genuine if its fruits, whatever they may be, shatter the intractable pattern of speaking about women as though what can be said of one can be said of all. For this reason, I found myself heartened by the DCS, both for the universality of its call to rethink women’s participation in the Church and for the multiplicity of voices and perspectives represented therein. The section on women begins in a striking way: “The call for a conversion of the Church’s culture, for the salvation of the world, is linked in concrete terms to the possibility of establishing a new culture, with new practices and structures. A critical and urgent area in this regard concerns the role of women and their vocation, rooted in our common baptismal dignity, to participate fully in the life of the Church.” The document refers to the “vocation” of women in the singular. But here, the vocation in question is the call to full participation in the life of the Church, the fulfillment of our common baptism. By locating the need to reconsider women’s roles within a deeper and broader call for ecclesial conversion, the document suggests a sense among the faithful that the status quo not only represents a problem for women but, fundamentally, for the mission of the Church.

Conversion begins in confession, and the DCS’s paragraphs on women tell some uncomfortable truths. Among the most striking excerpts is one from the Holy Land report: “Those who were most committed to the synod process were women, who seem to have realized not only that they had more to gain, but also more to offer by being relegated to a prophetic edge, from which they observe what happens in the life of the Church.” The line stunned me the first time I read it—not because it contained a new or radical sentiment, but because it was included in a document of this kind at all. It gives the lie to sentimental glorifications of the place that women occupy in the Church. Women don’t offer unique insight because of our natural humility or our maternal capacity for caregiving, but because the “prophetic edges” are the only ground from which we can speak. The report from the Superiors of Institutes of Consecrated Life is even more stark in its assessment of the discrimination faced by women religious. Prevalent “sexism in decision-making and Church language” leads to the exclusion of women “from meaningful roles in the life of the Church,” their report states. It indicts the treatment of women religious as “cheap labor,” and decries the tendency to “entrust ecclesial functions to permanent deacons” rather than allowing women to share in responsibility for ecclesial communities. What will come of these risky acts of honesty is not clear. At this stage, however, there is an accountability to history that comes from committing these reports to print.

If the synodal process comes to represent the dawn of a new epoch for women in the Church, it will be because it marks an intervention in an ecclesial culture in which men are its normative “protagonists.”
sharetweet

Crucially, the document reports, the call to rethink women’s participation “is registered all over the world.” Calls for women’s leadership in the Church are frequently miscast as a myopic concern of the West. Not infrequently, the global nature of the Church is cited as reason enough to downplay the urgency of such discussions: the role of women may be a concern to Catholics in the United States, the line goes, but this simply isn’t what Catholics in Asia or South America are talking about. As it turns out, the status of women is very much what Catholics in Asia and South America are talking about. “Almost all reports raise the issue of full and equal participation of women,” the DCS states. Its six paragraphs on women weave together voices from three continents, the Union of Superiors General, and the International Union of Superiors General. Nothing would have been more suspicious than the impression of consensus, and the document wisely avoids attempts to reconcile or over-interpret contrasting views on issues like the ordination of women. It names these differences and allows them simply to stand, returning them to the People of God for the next phase of conversation.

Pope Francis recently announced the extension of the synod through October 2024, a year longer than initially planned. By giving the process more time, he hopes to welcome greater participation and allow the work of discernment to unfold at a more deliberate pace. Having reached the synod’s halfway mark, it’s worth looking to the past and future. Karl Rahner famously characterized the Second Vatican Council as representing the dawn of a new epoch in Church history, the Church’s self-realization as a “world Church.” The council was unprecedented in its global and ecumenical scope, and the conciliar process shattered the illusion that a European-looking, Latin-speaking Church could rightly call itself universal. In order to rediscover itself as a “world Church,” the Church had to come to terms with how thoroughly its notions of sanctity and divinity had been conditioned by the normative status of European culture, aesthetics, language, music, art, and bodies.

Similarly, if the synodal process comes to represent the dawn of a new epoch for women in the Church, it will be because it marks an intervention in an ecclesial culture in which men are, to use the language of the synod, its normative “protagonists.” “Women want the Church to be their ally,” the document reports. We might proceed by posing the opposite question: Does the Church want women to be its ally? What would it mean for women to be recognized as protagonists in the Church, as full subjects, diverse in every respect, with the agency to respond in freedom and creativity to the call of the Gospel? As the next stage of synodal listening proceeds, this is the question I’ll be asking. 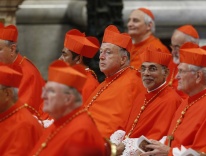