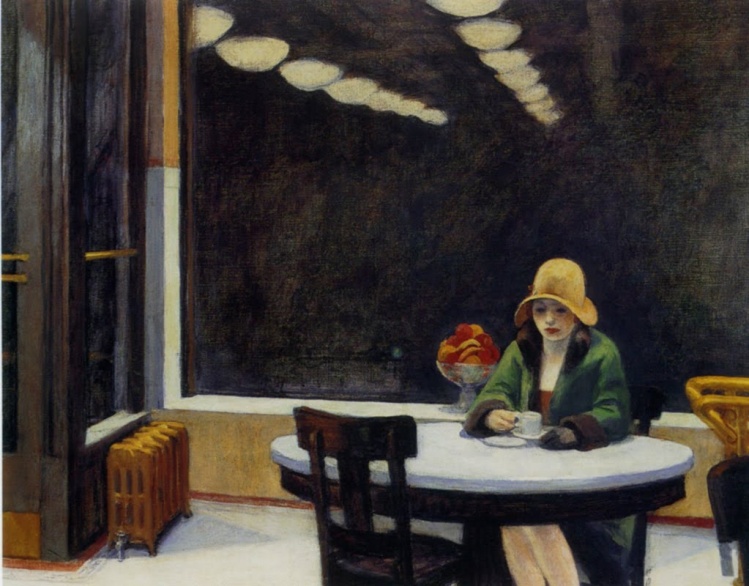 This summer, I moved into a fourteenth-floor apartment overlooking the Manhattan skyline. It was an upgrade from the dingy communal bathrooms and thin walls of college dorms. I loved having a kitchen to cook warm meals in and a balcony where I could drink tea before bed. I relished being able to burn a candle in my living room while reading after dinner, listening to the nearby 7 train’s melodic lull while falling asleep.

But what I loved most about my new home was that, late at night, I could look outside my window and see dozens of other apartments just like mine: some with fluorescent overhead lighting, some lit in warm yellows, others illuminated only by a flickering television screen. I found it comforting—that even in my solitude as a young single person in New York, I could see the blurry shadows of people moving about, each with their own stories. I’d think back on my day and wonder if I’d met them somehow: a fleeting glance on the 7 train, a furtive, thin-lipped smile, followed by diverted eyes and volume turned up on my headphones. I’m still enamored of those moments, those passing subway connections. As I soon learned after moving to New York from San Diego, the cardinal rule of the New York subway is never to make eye contact with anyone. But once in a while, I’ll catch the downcast glance of another public-transport rebel. Sometimes we’ll smile before quickly looking away.

My routine last summer became steady: 8 a.m. alarm, stumble out of bed at 8:30. Listen to a new podcast on the train, read a few pages from my latest dollar paperback. Stop at Pret A Manger for my morning cold brew, begin another work day. Being an intern at Commonweal had softened the blow of transitioning into a workday routine. I genuinely enjoyed my work and getting to know my intelligent and kind colleagues. We ate lunch together at the office every day, and I looked forward to political discussions, weekend updates, and the speculative conversations about when MoviePass would inevitably shut down. Around 5:30 I’d head home, either to meet up with friends or return to my fourteenth-floor room, and wind down for the evening.

But often as I’d commute home, a question would nag, an anxiety I suspect others my age share: Is there even a point?

I know this comes across as entitled millennial angst about having a 9-to-5. But I don’t mean it in a depressive way. I understand there’s beauty to be found in just existing. I’m frequently comforted by small delights—a laughing child on the subway, a random act of kindness I witness on the New York streets. And yet, I couldn’t shake my distress that I was participating in little other than what Thomas Merton famously dubbed “a completely artificial charade.”

On those existentially anxious commutes home, a line from Mary Oliver’s poem “Wild Geese” often came to mind: “Whoever you are, no matter how lonely, the world offers itself to your imagination, calls to you like the wild geese, harsh and exciting…” New York is all of those things. Living alone in New York among its diverse milieu, amid thousands of anonymous people with their own stories, is at once harsh, exciting, and lonely. And at times, it can feel like the loneliness outweighs the excitement more than the other way around.

Maybe that’s why I live for those subway smiles. In moments of identification, no matter how fleeting, our existence is affirmed.
sharetweet

Last November, the New Yorker featured a series by photographer Josephine Sittenfeld, who’d captured her junior-year Princeton classmates on film in 2000, and then again at their fifteen-year reunion. Sittenfeld’s roommate recalled in an accompanying Q&A session: “At twenty, I felt something intangible, indescribable, full of energy. Only now am I able to describe it—the ultimate sensing of a life ahead.” At twenty-one, I feel that same excitement of possibility. But I don’t think people my age talk enough about the fear surrounding that anticipation, or about the sadness, the rejection, and the loneliness accompanying that journey.

Every generation feels that desire for individuality, for our existence to mean something. Millennials, called entitled and self-centered, have been uniquely pushed to make our mark. Since I was little, adults would tell me that I would “do great things.” Or that the world was my oyster, or that I could do anything I put my mind to. For me, and likely for many others with similar backgrounds, this is compounded by my identity as a first-generation American. That my own parents overcame seemingly insurmountable odds to be successful in the United States, the land of individualism and opportunity, galvanizes my desire to ensure their sacrifices were worth it.

Upon entering college, we’re taught to create ourselves, and that the world will await with eager anticipation whoever it is we decide to be. We’re told that our voice matters, that people are listening to whatever we put forward. We search for our identities and find our uniqueness reinforced by our peers; we’re praised for our individual tastes and quirky personalities. But sooner or later, “the real world” hits us. The shock of our smallness comes to us in little waves: we’re watching, maybe even achieving, but no one’s looking in return.

Maybe that’s why I live for those subway smiles. In moments of identification, no matter how fleeting, our existence is affirmed. But also I think that placing the worth of my existence in the recognition of others is what leads to the loneliness I experience. The harshness of societal unimportance can feel crushing, particularly if our immediate temporal reality outweighs the promise of greatness, even the greatness of mere mediocracy, to come.

At Commonweal, one of my projects was editing video footage from the discussion series Spirituality in a Time of Disruption. This was one of my favorite tasks—meditative in its straightforwardness, voyeuristic in its nature. One moment from Christian Wiman’s conversation with Anthony Domestico stands out to me. Wiman quotes Dietrich Bonhoeffer’s ruminations of his imminent death, in which he fears not the loss of his future, but the eradication of his past. Wiman muses that, more than being forgotten as a poet or a career-person, he fears being forgotten “as a soul.” Wiman’s conclusion is finding comfort in God’s omniscient remembrance: “The promise of God for me often is that I often think of being remembered by God...as if your life could be the Lord’s insight, that you could be His inspiration, that He could remember our lives.”

What if I don’t have to do anything to be remembered? And what if I live my life with this hope—that every passing moment of ecstasy or fear, every little triumph and failure, is seen by God? I find comfort in this: no matter my smallness, God sees me from the quiet of wherever He’s throned. And to be forever remembered by the one who made me must be worth something, after all.