Prayer in the City
By B. D. McClay
Spirituality
Religious Life 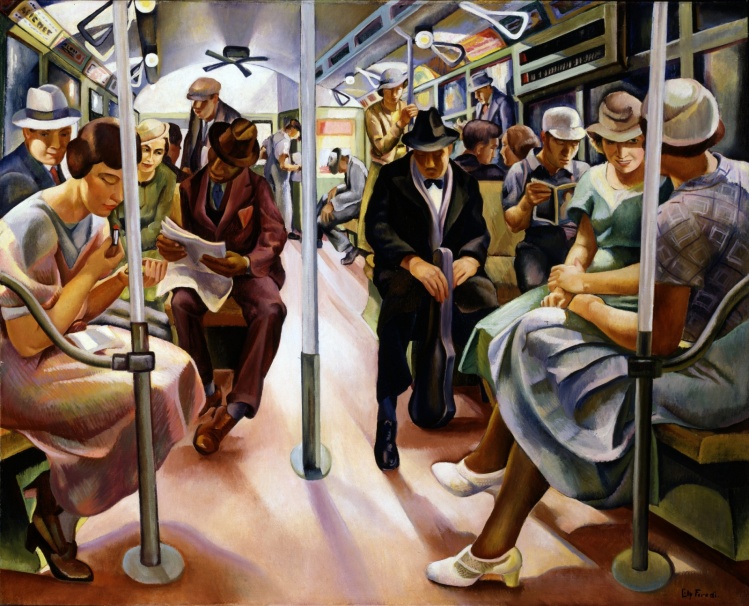 In the Tyburn Convent, on the north side of London, the nuns pray for people all night. This practice is beautifully memorialized in Sukhdev Sandhu’s little book Night Haunts: A Journey Through the London Nights, which I read in anticipation of a recent visit to the city. People call the convent and leave prayer requests, which are subsequently offered up during Night Adoration. Sandhu writes that the practice has continued without disruption for over a hundred years, including when the place was bombed in 1944. “Prayer is the true language of the night,” he concludes. “It is the sound of London’s heart beating. The sound of individuals walking alone in the dark.”

If you are not a cloistered nun, city life seems to present many opportunities for indifference and few for kindness. In most of America’s cities you can’t walk a block or two without meeting someone who is in a state of serious destitution. It’s not meaningless to give such a person money or stop for conversation, but it is, in the broader sense, ineffectual. Meanwhile, ambulances scream past you; people weep on the bus. You read the news and discover something horrible has happened very near you and about which you had no idea.

This ambient sense of failure can be harnessed in a bad-faith way, of course. As a person routinely harassed by street canvassers, I can only assume that I project a dark cloud of guilt wherever I go and appear to be an easy mark. Attempts at deflection usually backfire. A man who approached me with a pitch for saving orangutans was unphased by my declaration that I hated great apes and smoothly switched to water conservation. “I would hate to see you again,” he told me, “when we’re fighting over the last bottles of clean water.”

So it’s useful to have an understanding of what you can and can’t do, can or can’t fix, and also when people, while not deserving to be treated unkindly, can still be dealt with brusquely. Sometimes you are in situations where there is no clearly right thing to do. (Do you offer the person crying in public comfort or privacy?) But it’s hard to disagree with a vicar in Sandhu’s book who called the city, viewed from a height, a vision of Christ crucified.

The closest one can probably come to understanding prayer is knowing that you don’t.
sharetweet

But if proximity breeds indifference, there are also ways to resist fully succumbing to it. When I walk through cities, I try to remember to pray. It doesn’t usually get very sophisticated—Hail Marys and Our Fathers, in some combination, when I pass someone who seems to be homeless, or hear an ambulance, or see a person in distress. Even if there’s nobody in distress, I’ll try to just recite these prayers to the rhythm of my footsteps. After all, just because I can’t see someone doesn’t mean they might not need a prayer. And every once in a while, strangers will ask you to pray for them.

I don’t know that this is, as praying goes, particularly good, since it’s usually (really, always) distracted. But it can’t hurt. And it is one action I can take to prevent the hardening of my heart in a city where that often seems like the only way to live as I pass from one extreme to another with every step—wealth to poverty, highbrow to lowbrow, and then back again.

City life is troubling in the same way the rest of life is troubling; it presents you with people who have a real moral claim on you, with whom you are linked by various dependencies, and then leaves you to navigate these things on your own. Even seemingly neutral things can create a series of reactions: a baby cries in my apartment building; the dog upstairs barks; my dog barks at the dog upstairs; the baby is disturbed and goes on crying. But because in cities we are all thrown together, the good ways in which we are dependent on each other are present too: public transportation, libraries, giving directions, doing each other small favors.

A city is noisy, dirty, sometimes cruel, sometimes surprisingly kind, always restless, constantly building over its own past. There is a sense of the vastness of human experience not only in a particular space but across time. In London there is an old Roman temple to Mithras, uncovered by a bomb. You can go down into it and stand in the dark, and wonder about the people who were here who worshipped a god about whom almost nothing is really known: what they wanted, what they were hoping for, what exactly they did. Temples to one god become temples to another. Churches become houses and stores and monuments. And if you could stand in one place and let centuries pass over you, if you could see everything that had happened in such a space all at once, maybe you would begin to understand prayer.

But you can’t. There’s only the polyphonic city itself, what you can grasp of it, the knowledge that the full range of human joy and pain is taking place all around you, that you’re standing and thinking in a place where anything could have happened and everything probably has. There’s only the feeling that you are in a place where the connections of the people around you create something with a life that is its own. The closest one can probably come to understanding prayer is knowing that you don’t. But lots of people, without knowing what they’re doing, or even believing in it, go on praying every day—for themselves, for their neighbors, and for people they love. And the thing that ties them together, place to place, past to present, isn’t just prayer. But surely that is one aspect of it.

I didn’t get to visit Tyburn Convent on my trip to London, but I did look them up and leave a message asking them for prayer. About a week later, I was surprised to get an email from them telling me that they were “sorry that you have had to wait for an email to assure you that we are happy to include your intentions in our prayer.” I was touched by the email. Still, one nice thing about prayer—it doesn’t really matter if you know someone’s praying for you or not. It does what it does all the same.