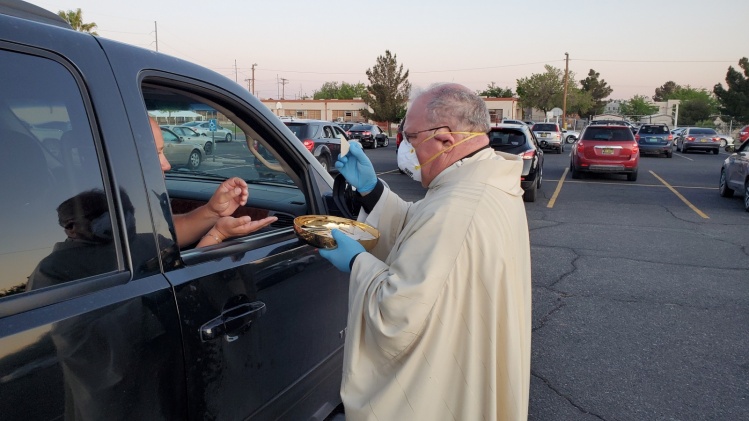 Bishop Peter Baldacchino of Las Cruces, N.M., gives Communion to a passenger of a vehicle during the Easter Vigil in the parking lot of the Cathedral of the Immaculate Heart of Mary in Las Cruces April 11, 2020. (CNS photo/courtesy David McNamara, Diocese of Las Cruces)

If your church is reopening during the pandemic, what will liturgy look like? Well, everybody in the congregation will wear masks and sit far apart. There will be little or no singing, and big screens may take the place of printed programs. And, if the Bishops’ Committee on Divine Worship (BCDW) at the USCCB has anything to say about it, you won’t get Communion until after Mass is over.

Yes, you heard that right. The guidelines sent out to all the bishops of the United States by Archbishop Leonard Blair, chair of the BCDW, recommend, as their preferred option, that people be given Communion at a Communion service after Mass rather than during the Mass itself.

Why not distribute Communion at Mass? The reason stated is that even though having the priest wear a mask would be safer for the distribution of Communion, “the Mass is imbued with powerful sacramental and liturgical symbolism. Wearing a mask…would be a detrimental counter-sign in this context.” In other words, they don’t want the priest to wear a mask at any time during the Mass, but they do want him to wear a mask to distribute Communion. So, rather than have him don a mask for the Communion Rite, they recommend taking Communion out of the Mass altogether.

This is, in a word, ridiculous.

Fortunately, individual bishops are free to ignore the advice given by the Bishops’ Committee on Divine Worship.
sharetweet

First of all, I don’t know what school of liturgy would prohibit the wearing of a mask during a pandemic because doing so is a “detrimental counter-sign” to the “sacramental and liturgical symbolism” of the Mass. If anything, I think it would be received as a sign of pastoral care for the health and well-being of both the congregation and the priest himself (many of our clergy are older men with pre-existing conditions that increase their vulnerability). We are not even talking about wearing a mask continually, but merely putting one on for that part of the Communion Rite that involves distribution of the host to the assembly.

Second, it should be clear to everyone that sharing Communion in its proper place, at the Communion Rite, is far more central to the “sacramental and liturgical symbolism” of the Mass than is our ability to see the nose and mouth of the priest. The Second Vatican Council recovered a sense of Eucharist not only as sacrifice, but also as sacred meal, shared by the assembly in the heart of the Mass. When the assembly is present for Eucharist, having the priest alone receive is what would be truly a “detrimental counter-sign.”

There are other problems here as well. The guidelines recommend placing the altar breads for the people at the side of the altar, on their own corporal, removed from the host and chalice of the priest. This gives the wrong impression. Eucharist is our sign of unity; it is not a good idea to set the people’s Communion off to the side, as though there are two separate sacrifices on the altar. Are we not partaking of one bread?

The guidelines Archbishop Blair is promoting were actually produced by the Thomistic Institute at the Dominican House of Studies in Washington D.C. I am sure they were written in good faith and with the best intentions. There are a lot of guidelines out there; it should surprise no one that some of them have problems. What I find astonishing and disturbing, however, is that the chair of the BCDW—who has a cadre of professional advisors and could call on liturgical expertise anywhere in the country—should blithely send out a set of guidelines that does not respect the shape of the liturgy. Fortunately, bishops are free to ignore the advice given in them.

A few days after Blair’s message, the Federation of Diocesan Liturgical Commissions issued its own set of guidelines, and I am happy to say they are far better. They state, among other things, that “the Communion Rite is an essential and unmovable element of the Order of Mass.” Let every bishop take note.

A Tale of Four Cardinals