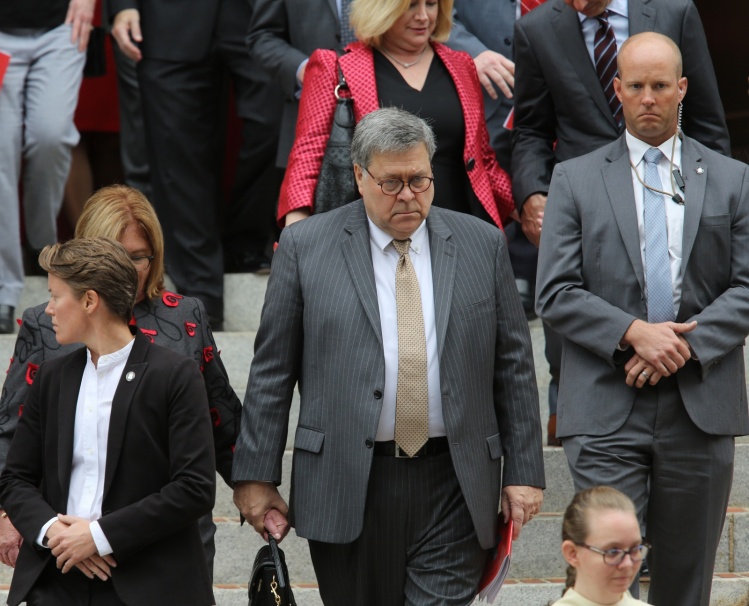 In a recent New Yorker profile of Attorney General William Barr, we learn that his fealty to the Republican Party took hold early. In the first grade, while a student at Corpus Christi elementary school on the Upper West Side, he delivered a speech in favor of Dwight Eisenhower’s presidential campaign. A few years later, he was a vocal supporter of Richard Nixon, prompting a nun to promise she’d pray for him. Her prayers weren’t answered—but Barr’s enthusiasm for Nixon proved telling. He’s spent a lifetime making sure Republican presidents were never again held accountable for their misdeeds.

During his first stint as attorney general, in the George H.W. Bush administration, Barr earned the title “Cover-Up General” from New York Times columnist and former Nixon speechwriter William Safire. Barr first met Bush when the latter was running the CIA in the 1970s, and helped the future president stonewall the Pike and Church committee investigations into the agency’s decades of coups, assassinations, and other abuses. “Intimates say the experience was formative for Barr,” the Village Voice reported in 1992, “turning him into an implacable enemy of congressional intrusions on executive prerogative.” The lesson Barr drew from Watergate was that the presidency had grown perilously weak; when he served in Bush’s Justice Department, he set to work rectifying that.

Barr was behind the legal rationale for seizing Manuel Noriega from Panama. He opposed the appointment of a special counsel to investigate the Bush administration’s dealings with Baghdad in the years leading up to Saddam Hussein’s invasion of Kuwait, then argued that Bush had the right to launch a war against Iraq without congressional support. He also defended Bush’s pardons for those involved in the Iran-Contra affair. “It was very difficult because of the constant pendency of the Iran-Contra case,” he said years later. For Barr, what mattered was not accountability for a reckless, criminal scheme but what such oversight and prosecutions meant for presidential power.

Barr is a disgrace, subordinating the impartiality and professionalism of the Justice Department to Trump’s political needs.
sharetweet

Barr’s vision of an unfettered executive has always been dangerous, but now it’s in service of an impulsive authoritarian. When President Trump chose Barr as his new attorney general, he knew Barr could be counted on to defend his administration’s crimes and corruption. And the president has not been disappointed.

Not long after being confirmed, Barr released his own highly misleading summary of Robert Mueller’s investigation into the Trump administration’s obstruction of justice. Three days later, Mueller wrote to Barr, pointing out that the summary “did not fully capture the context, nature, and substance” of his report, creating “public confusion about critical aspects of the results of our investigation.” As Donald Ayer, former U.S. Deputy Attorney General under George H.W. Bush, put it, Barr has also “disrespected the integrity and authority of the department’s experienced career attorneys by repeatedly putting political cronies into special oversight roles to review the work of others and engineer changes in the government’s advocacy positions for transparently political reasons.” Meanwhile, Barr continues to meddle in cases involving close Trump associates, first working to reduce the sentence of Trump crony Roger Stone, and more recently withdrawing charges against Trump’s former national security advisor Michael Flynn.

This last move was especially disturbing. Flynn had twice pleaded guilty to lying to the FBI about his communication with Russian diplomats over sanctions related to their country’s interference in the 2016 election. When he fired him in February 2017, Trump even admitted that Flynn “had lied to the vice president and the FBI.” National-security expert Jonathan Stevenson calls the withdrawal of such a criminal case after a guilty plea “unprecedented,” with the motion filed being “a freakish document” with little legal merit. The peril of the situation prompted 1,900 former and current Justice Department officials to reiterate their call, first made after Barr’s intervention in the Stone sentencing, for him to step down for having “once again assaulted the rule of law.”

They’re right. Barr is a disgrace, subordinating the impartiality and professionalism of the Justice Department to Trump’s political needs. No American can have confidence in its work as long as Barr is in charge. During a recent interview, he was asked how history would view his actions. “History is written by the winners,” he said, “so it largely depends on who is writing the history.” It was a cynical answer, but one in keeping with his apparent belief that might makes right, and that the law is ultimately a weapon—another reminder that Barr is unfit to be the chief law-enforcement officer of the United States.