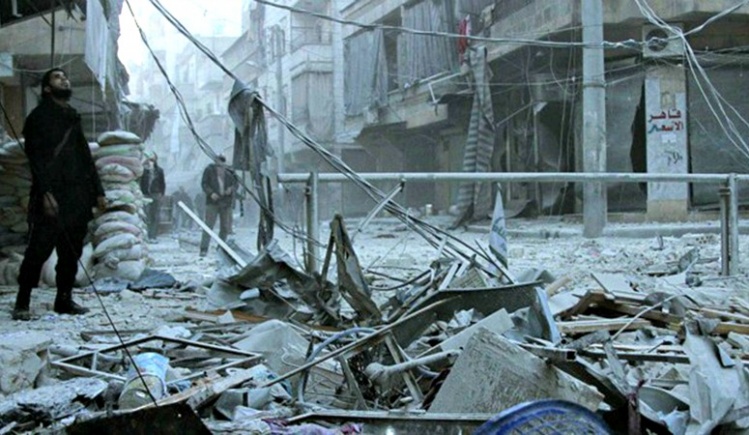 It has now been a hundred years since ethnic cleansing began in the Middle East, making enemies of neighbors, destroying sites medieval and ancient, and casting settled populations into exile or death. Over the century since, faced with a destruction frequently quickened by war, untold numbers of exiles have undertaken perilous journeys in search of safety, as the institutions of this complex and venerable region crumbled. Few before World War I could have foreseen such calamity for the region. At last century’s outset, its cosmopolitan cities had become lively centers of polyglot, religiously differentiated groups, growing rich as people came from the countryside to gain from their international trade. Awarded imperial trading concessions, the cities’ notable families flourished, accumulating ever-greater wealth in a global economy. A distinctively middle-eastern modernity might have been.

But then came the terrible Battle of Gallipoli, and the cruel April of 1915 brought to Constantinople a state-run slaughter of prominent Armenian leaders; trampling the Anatolian countryside, it became a genocide consuming more than a million Armenians and other Christians—Assyrians, Greeks, Syrian Orthodox, Chaldaeans. Some of their former neighbors, the Jewish communities of the Ottoman Middle East, had already gone south to the new settlements in Palestine; most of the rest would follow in 1948. In 1918, victorious France and England divided their Ottoman spoils into Mandates, succeeded after World War II by Arab nationalist states in which Christians at first participated, indeed often as leading citizens. But not for long. World War II had also inevitably established Israel, and after that the expulsion of Palestinians, setting the stage for the interminable conflicts and cleansings that continue to this day.

Two recent books record the beginning and the end of this hard century of upheaval, war, and exile. Leila Tarazi Fawaz’s magnificent Land of Aching Hearts describes the experiences of ordinary people—merchants, soldiers, women—during the First World War; Christian Sahner’s Among the Ruins turns to the recent past, chronicling a graduate student’s travels in Syria and Lebanon just a few years ago. While differing in aim, scope, and depth of scholarship, both authors write perceptively and sympathetically about a complex and sophisticated society unfamiliar to most Americans. Focused on periods at each end of the twentieth century, neither book thoroughly covers the rise of nationalism, and the roles played by the United States, the World Bank, and the IMF in creating the conditions for the region’s distress also lie beyond both authors’ scope. (Readers looking for a fuller picture can turn to James Gelvin’s The Modern Middle East.) Yet Fawaz and Sahner help distant observers of the region gain a nuanced understanding of displaced Christians, Jews, and other minorities (including Muslim groups) who once comprised the much-lamented “mosaic” of peoples in Beirut, Alexandria, Baghdad, Istanbul, and Smyrna—a variety that continued to exist in the Syrian city of Aleppo, for instance, until just five years ago.

Fawaz, a professor at Tufts, recounts the effects of the Great War upon a Middle East grown prosperous and relatively free during a period of industrialization and Ottoman political decline. During the war, battles, genocide, disease, and starvation eliminated 25 percent of the region’s population. Fawaz shows how particular people endured the war—or failed to, succumbing to starvation or disease. The tales of Falih Rifki Bey, a journalist, and Ihsan Turjman, a cleric and translator who enlisted in the Ottoman Army, are just two examples of her dauntless research. But not only individuals died; as the century proceeded, a way of life disappeared as well. Fawaz cites the eloquent testimony of Wadad Makdisi Cortas in her memoir A World I Loved: The Story of an Arab Woman. “We would not have thought it then,” Cortas writes,

but the war brought the twentieth century to Beirut. Those who gave a certain rhythm to our daily life—the potters propelling their wheels by foot amid the fragrance of wet clay; the neighborhood blacksmith and his two boys, deaf from typhus, who helped in the shop but whose great talent was kite-making; the baker, who didn’t make and sell bread at all but rather baked the prepared dough that the people without ovens brought him; the blind man who roamed the streets singing for alms until he learned to mend chairs, at which point he had two occupations—all of those people belonged to another time.

Until very recently, remnants of that prewar Ottoman world survived here and there. Before 2003 in Iraq or 2012 in Syria, Western travelers could safely walk into a mosque near a church. As recently as the 1980s, they might even encounter an aged member of the now-departed “Moses people,” a Jew, in Damascus. But no longer.

The title of Christian Sahner’s book, Among the Ruins, refers to the ancient sites of Syria, but the title now tragically evokes the rubble of modern Aleppo and ancient Palymra as well. A student of the historian Peter Brown at Princeton, Sahner was encouraged to visit the region to study Arabic and research a thesis on Christian martyrdom under medieval and modern Islam. There he wrote reports for the Wall Street Journal that became the basis of this volume. In Syria he covered Damascus and Beirut, the hill-town of Ma’aloula west of Damascus, Deir es-Zor in the northeast, and the ancient sites of Qalat Siman, Palmyra, and Dura-Europus; later he wrote from Lebanon. In both countries he encountered Syrians and Lebanese who lived urban lives surrounded by reminders of the past. Now, with 4 million Syrians living as refugees and many more millions displaced, the people he encountered so recently are likely gone.

Sahner’s final chapter ponders Syria’s future. Attachment to the ancient past might unify Syrians, Sahner speculates; the country has suffered chaos before, and perhaps “like a phoenix, it shall rise again once the fighting is over.” Its diversity might be conserved, he reasons, particularly its Christian communities. But diversity is a modern and particularly American value, made possible in this country both by the public secularism that protects religious minorities and by a common agreement to restrict religious conflict to the private sphere. Traditions in the Middle East are different. The Ottomans used and tolerated Christian minorities; Western powers exploited them; dictators manipulated them; now sectarianism and anarchy are killing them.

Saddam Hussein is reported to have told a Christian leader that if Christians were the rose, he was the vase: once he was shattered, they would die. Bashar al-Assad, too, found uses for Christian groups that allowed them to persist. These strongman polities have now come to a disastrous end. Since the revolution and civil war, 40 percent of Syria’s population has been displaced, and since last summer millions have been moving west—ironically, heading toward the countries of their former colonial rulers. Displaced Iraqis have begun to follow them in large numbers.

Within the Ottoman Empire, non-Muslim communities lived as subordinate members of society. Still, by custom and law, their Islamic rulers often welcomed, tolerated or protected them—sometimes, indeed, from Western Christian rulers. Muslims and non-Muslims shared, often peacefully, a culture and a world. Fawaz shows how that world began to crack, and Sahner records its modern vestiges, a fractured system in violent collapse. Both show us just how much the Syrians, the Iraqis, and their children—and the world—have lost.

A Fence in the Water