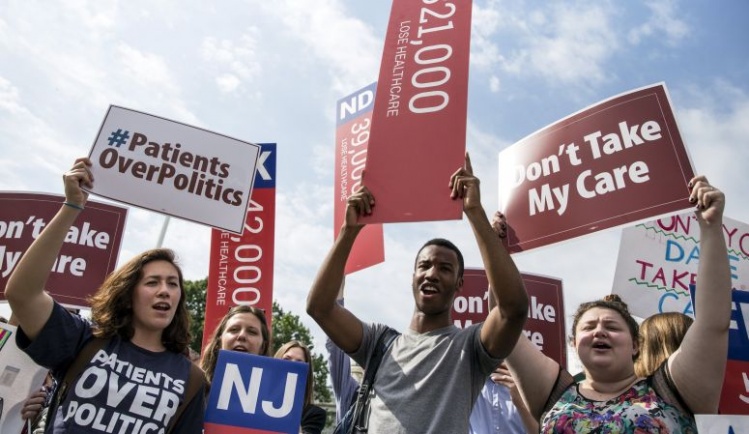 The fall of 2013 was—to put it mildly—a difficult time for the architects of the Affordable Care Act. The Obama administration’s launch of its health-plan enrollment website had been a disaster, with users unable either to access it or to save critical information. At the same time, millions of Americans were receiving letters from their insurance companies telling them that their plans were being terminated because they no longer complied with the ACA’s coverage and benefit requirements. This was an embarrassment for Obama, who had famously promised “if you like your plan, you can keep it.”

Obamacare’s critics could barely contain their glee at the administration’s travails. “Obamacare is failing and will fail,” opined the Weekly Standard’s Bill Kristol. Speaker of the House John Boehner, who had led more than fifty votes to repeal Obamacare, assumed the air of a world-weary statesman: “When you step back and look at the totality of this, I don’t think it was ever going to work.”

Supporters of the ACA didn’t know it at the time, but they had hit rock bottom. From that point forward, the law would slowly but surely accumulate a track record of success. While the patient may not be ready for discharge, he’s at least out of intensive care.

Republican demands to repeal the law will grow louder and shriller as we approach Election Day 2016. As another bitterly partisan presidential contest unfolds, it would be good to keep in mind what the ACA has actually accomplished. The ACA’s most striking achievement has seen a significant reduction in the number of Americans without health insurance. Earlier this year, the Gallup organization released data showing that the share of Americans without insurance fell from a high of 18 percent in 2013 to 11.9 percent in early 2015, the lowest rate recorded since Gallup began tracking this item in 2008. The improvement in coverage was even more dramatic for low-income families, African Americans, Hispanics, and adults under the age of thirty-five.

The law achieved its impressive expansion coverage in a variety of ways. The ACA requires all Americans to obtain health insurance that covers a standard package of benefits (the so-called “individual mandate”). If you are not already covered, you have a variety of insurance options depending on your age and income. Health plans are now required to allow children to stay on their parents’ plans until the age of twenty-six. The federal Medicaid program was expanded to allow states to cover families with incomes less than 138 percent of the Federal Poverty Level (roughly $33,500 for a family of four). Finally, individuals not eligible for Medicaid can purchase insurance through a regulated marketplace known as an “exchange,” with subsidies available for middle-income families.

The downside of a system with so many moving parts is that some individuals inevitably fall through the cracks. At the beginning of 2015, thirty-three states had chosen not to expand their Medicaid programs to cover more of the uninsured, despite the fact that the federal government was willing to pay most of the cost. This left roughly 4 million people in a “coverage gap” where their incomes were too high for their state Medicaid programs but too low to qualify for subsidies that would allow them to purchase private insurance through the exchange. Four states—Texas, Florida, North Carolina, and Georgia—account for almost two-thirds of those in the coverage gap.

Another hole in the system is coverage for the nation’s 11 million undocumented immigrants, who are not eligible for Medicaid and cannot purchase insurance through the exchange. More than half this group is uninsured and they account for about a quarter of the remaining uninsured population. States with large numbers of undocumented immigrants are struggling to address the problem. Earlier in 2015, California was considering using its own funds to extend coverage to all undocumented immigrants, but cost considerations forced the state to limit the program to those under the age of eighteen.

The ACA’s success in expanding coverage is all the more impressive given that it has been able to do so without breaking the bank. Back in March 2010, the Congressional Budget Office estimated that the annual net cost of the ACA’s coverage-expansion provisions would be $172 billion by 2019. In 2015, lower-than-expected costs for insurance subsidies led the CBO to reduce its estimate to $132 billion, a $40 billion savings. Contrary to the hyperbolic claims of its opponents, the ACA as a whole is actually having a positive effect on the federal budget. When Congressional Republicans asked the CBO to examine the savings associated with repealing Obamacare, they found such a move could actually increase the federal deficit by $350 billion over the next ten years.

Obamacare has also succeeded in bringing millions of new individuals into the individual insurance market without (so far) causing premiums to skyrocket. Prior to the passage of the ACA, the individual insurance market was extremely fragmented with a very wide range of coverage options (for example, some plans covered abortion services while excluding coverage for childbirth). One of the goals of the new law was to introduce more competition in this market by allowing individuals to aggregate their purchasing power through the federal and state exchanges. With so many “covered lives” at stake, insurers have an incentive to offer a good rate to individuals purchasing through the exchange. The ACA also requires plans to offer a standardized set of benefits and cost-sharing options, making it easier to compare apples to apples when shopping for insurance.

Is there trouble ahead? Recent news stories have suggested that rates for individuals in the exchanges may rise dramatically in 2016. Some insurers have been proposing increases of 20 percent or more, although these tend to be opening bids in negotiations with state insurance regulators that ultimately result in more modest increases. Even after those negotiations, however, there will be cities like Portland, Oregon, where some enrollees will see premiums increase by 16 percent. Families in rural areas may also see higher increases because fewer insurers compete for their business.

Looking across the country, however, the average increase is likely to remain in the single digits. That’s not bad for a segment of the market that routinely saw double-digit increases in the years before the ACA’s passage. Consumers, for their part, may be able to obtain even lower rates if they are willing to switch plans. Indeed, the willingness of consumers to switch plans will be a critical factor in putting pressure on insurers to keep premium increases under control. There is some evidence that consumers are indeed shopping around from year to year.

THE TRILLION-DOLLAR QUESTION is whether Obamacare’s run of financial good luck will continue. The rollout of the ACA coincided with a slowdown in the rate of increase in health-care costs, which industry analysts are still trying to explain. Some of it was due to the lingering effects of the Great Recession, as consumers cut back on all forms of spending, health care included. With wages still growing slowly, it may take a while for health-care cost growth to return to pre-recession levels. Employers have also been shifting more of the cost of health insurance to their employees in the form of higher deductibles and copayments, which leads them to consume less. The ACA will place some limits on this, but it will not reverse the overall trend.

At the same time, some of the things that had held back health-care spending over the past few years may not be as powerful going forward. Recent controversies over the high cost of new drugs for cancer and Hepatitis C suggest that pharmaceutical costs may be poised for a new upward climb after several years of relative quiescence. The phase-out of programs that compensated insurers if their Obamacare enrollees used more health care than expected is also likely to put upward pressure on premiums in the years ahead. The recent announcement by insurance giant UnitedHealth that it may exit the state exchange business due to large losses raised fears that other insurance companies might follow. Other large insurers seem inclined to stay the course for now, but the Obama administration is likely to be nervously eyeing the industry’s balance sheets over the next few months.

It’s clear that the passage of the ACA was a bit of “shock therapy” for an industry that had grown rather bloated and complacent. Insurers, hospitals, and providers have moved rapidly to cut costs as they prepare for a future where they will be competing more explicitly on price. It is still an open question how much of the cost savings is coming from sustainable changes in how health care is delivered and how much is due to picking “low-hanging fruit”—renegotiating supply contracts or restricting business travel, for example—that yields only short-term savings.

Federal officials are hoping it is the former. The law authorized a number of demonstration programs aimed at moving the industry away from traditional fee-for-service medicine toward a payment system that would reward providers for keeping people healthy. At the core of this is the concept of the accountable care organization. ACOs are groups of doctors, hospitals, and health care providers who come together to coordinate care for Medicare beneficiaries. If they can provide care for less cost than traditional Medicare, they get to keep some of the savings.

About 6 million Medicare beneficiaries are cared for through ACOs and the program has produced some modest savings. Most of this, however, is coming from health-care systems that had significant experience in providing integrated care before the passage of the ACA. Organizations that are relatively new to this way of working are still struggling to make the transition.

Despite its track record of success, the ACA remains politically vulnerable. Ongoing polling by the Kaiser Family Foundation suggests that the public remains divided on the law, with less than half of Americans having a favorable view of it. At the same time, the share with an unfavorable view has been falling. It peaked at 53 percent in July 2014 and fell to 40 percent by the summer of 2015.

The Republican Party remains united in opposition to Obamacare, and all of its presidential candidates are on record as supporting its repeal. What is less clear is what they will be able to do if they attain the Oval Office. Millions of newly insured Americans will create a powerful constituency to maintain the status quo, as will the governors of states that have benefited from the increased flow of federal Medicaid dollars. A Congress that has a difficult time with the simple task of electing a speaker of the house would almost certainly struggle with the hundreds of policy tradeoffs that true “repeal” would demand.

Like any major piece of social policy, the Affordable Care Act is certainly not perfect and two years in may be too early for a conclusive judgment about its long-term success. Nevertheless, if you had told those frantic White House officials in the fall of 2013 that within two years almost 17 million people would obtain health insurance and that it would all cost less than originally expected, I suspect they would have considered the law a smashing success. So, perhaps, should we.

When Bigger Is Better