The Sex-Abuse Crisis Is Global

And the Vatican Knows It
By Massimo Faggioli
Sexual-abuse Crisis 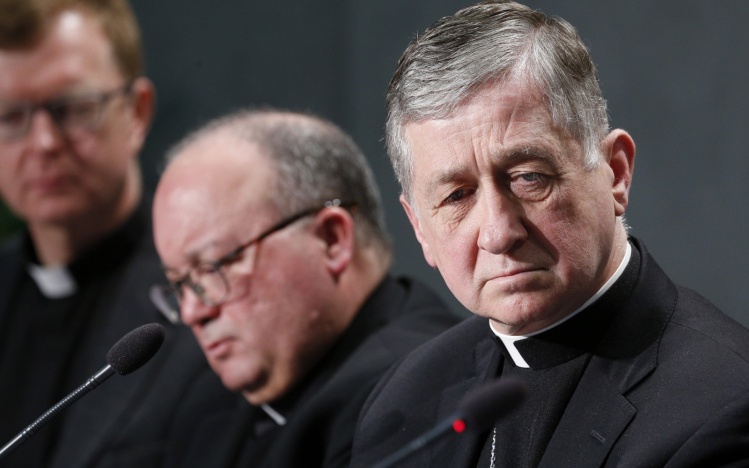 Fr. Hans Zollner SJ, Archbishop Charles J. Scicluna of Malta and Cardinal Blase J. Cupich of Chicago, all members of the organizing committee for the Feb. 21-24 Vatican meeting on the protection of minors in the church, attend a press conference to preview the meeting at the Vatican Feb. 18, 2019 (CNS photo/Paul Haring)

2018 was the year that many Catholics finally accepted that the church’s sex-abuse crisis is truly a global problem. Hence the Vatican’s decision to bring the presidents of all the bishops’ conferences together in Rome to discuss the issue between February 21 and 24.

The abuse crisis forces us to look at the interconnectedness of the church, and to resist the spirit of our time, which not only closes borders and builds walls, but also blinds us to how what’s happening in one part of the world relates to what’s happening in another. Of course, we Catholics have all been taught that the church is the Body of Christ, and that if one member of that body suffers, the entire body suffers. We know this, but we also forget it. In recent years, each member has seemed preoccupied with its own suffering. The sex-abuse scandal in America or Chile or Australia reverberates in other parts of the world. And the abuses that have not yet come to light in other countries—because of cultural and political differences, as well as different levels of media scrutiny—will likewise affect Catholics in the United States once they are finally revealed. This is one reason the meeting in the Vatican is likely to focus more on those countries where the abuse crisis has not yet erupted and those churches that have yet to develop their own reforms for preventing, detecting, and responding to abuse.

Last year was a watershed. The revelations in Chile and the United States especially called into question the role of the Vatican and the pope in the global crisis. They also weakened the credibility of the bishops in dealing with the crisis. Various groups of lay Catholics, with various agendas, have stepped forward offering to take a leadership role in addressing the crisis.

One has to see the sexual-abuse crisis as a global crisis because the church itself is global, but also because its various parts are increasingly interconnected
sharetweet

A conference that took place in Washington, D.C., earlier this month illustrated the shifting balance in the American Catholic conversation about the abuse crisis. Organized by the Leadership Roundtable (a church-management network founded and developed by Geoffrey Boisi and Kerry Robinson), this conference represented theological and cultural perspectives very different from those in evidence at another recent event sponsored by a conservative group called “Better Church Governance Group.”

One important difference between these two events was that at the event organized by the Leadership Roundtable, lay people and clergy were together in the same room. The bishops were represented by Cardinals Blase Cupich, Seán O’Malley, and Joseph Tobin, along with Bishop Shawn McKnight of Jefferson City, Missouri, and Bishop Mark Bartchak of Altoona-Johnstown, Pennsylvania. The Apostolic Nuncio to the United States, Archbishop Christophe Pierre, was also in attendance. Among the laity invited to speak at the conference were university presidents, experts in the formation of clergy, and well-known promoters of intrachurch dialogue such as John Carr and Kim Daniels of Georgetown University’s “Initiative on Catholic Social Thought and Public Life.” The goal of the conference was to come up with a set of proposals for strengthening and building upon the Dallas Charter, proposals to be sent to the leaders of the Catholic Church in the United States. The conference’s presentations and group conversations were remarkably honest and straightforward. Participants, myself included, were asked to abide by the Chatham House Rule (which basically means I can’t tell you who said what). What I can say is that the discussions were remarkably free of any attempt to use the abuse crisis to advance an ideological agenda on the hot-button issues that divide the church. No one proposed simplistic or demagogic solutions. Nor did anyone try to delegitimize the pontificate of Francis.

There is something else that made the Leadership Roundtable conference significant. This was Roundtable’s decision to invite Fr. Hans Zollner, SJ, president of the “Center for Child Protection” at the Pontifical Gregorian University in Rome. Zollner was appointed by Francis to help organize the upcoming meeting in the Vatican. His presentation at the conference in Washington, D.C., addressed the theological and ecclesiological roots of the crisis, and surveyed the different stages of the crisis in different areas of the world.

One has to see the sexual-abuse crisis as a global crisis because the church itself is global, but also because its various parts are increasingly interconnected. The presence in the U.S. and Australian church of priests, religious, and lay people from other parts of the world is more and more visible, and the scandal has not yet emerged in many of the local churches from which these people are coming. As we have all learned the hard way, unconsciousness of the crisis is one of the things that perpetuates it. Rules governing the formation of American-born priests will only go so far in a U.S. church that relies heavily on foreign-born priests with a different formation. American bishops who import priests from abroad are taking a big risk by ignoring the global dimension of the sexual-abuse scandal.

Hard as some will find it to believe, the Catholic Church has in recent years done more than any other global institution to raise its standards of child protection. It has done so, one must acknowledge, because it was forced to do so, but also because it has the resources to do so (not every institution does). Still, the job is not done, and in some places it is only now getting started. The church in parts of the world where the crisis has yet to surface needs the example and the leadership of the U.S. church, which has been dealing with this problem for decades and has learned some painful but necessary lessons during that time. One thing we’ll find out at the Vatican summit on sex abuse, which begins in just a few days, is whether the U.S. church is able to provide support and leadership to Catholics still struggling through earlier stages of this global crisis.