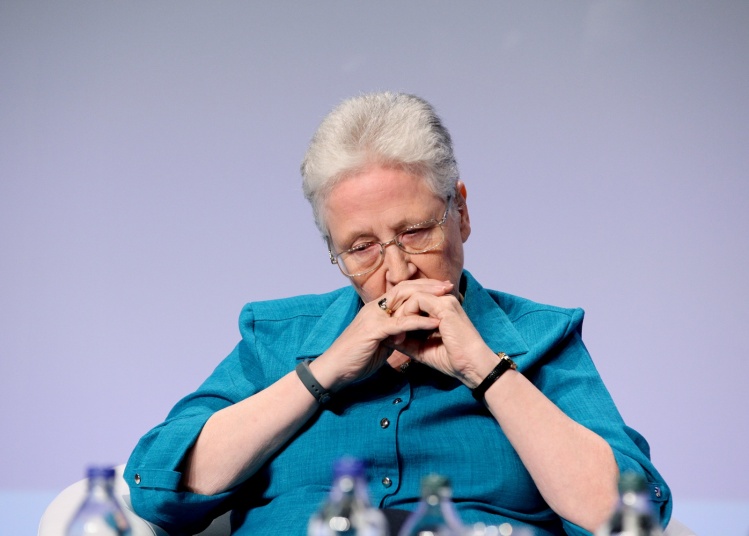 The problem of clergy sexual abuse of minors in the Catholic Church can’t truly be dealt with until the even more common abuse of adults is recognized. Experts say that both offenses are rooted in the abuse of power, and that this is the underlying cause that needs to be addressed when leaders of bishops’ conferences gather at the Vatican this month for a meeting on “the protection of minors in the Church.”

Sexual-abuse survivor Marie Collins, who served three years on the Pontifical Commission for the Protection of Minors before resigning in disappointment in 2017, is among those who have called for the bishops to look closely at the abuse of adults. In a submission to the meeting’s organizers and in an interview with the Commonweal Podcast, she said that it’s important for the church to understand how damaging clerical sex abuse of adults has been.

“I do believe it's a very big problem in the church that has been ignored because it hasn't been in the public eye and with everything that has happened in the church, it's not until it comes into the public eye that the church starts to pay attention to it,” she said. “They tend with this whole issue to be reactive rather than proactive.”

There’s been some media attention following allegations that Theodore McCarrick sexually harassed and abused seminarians, as well as Pope Francis’s recent acknowledgement that some priests and bishops have abused women religious. And the #MeToo movement has led to a deeper public understanding of how abusers exploit their power to coerce their victims.

Church law, and thus the upcoming Vatican meeting, is concerned with punishing priests who abuse either minors or “vulnerable” adults—but “vulnerable” is narrowly defined, as Collins said, as those whose mental faculty remains on a child’s level. There has to be more to it: “A vulnerable adult can be vulnerable due to the fact that there's a differential in power between themselves and their abuser,” Collins said. “Or they can be somebody who, say, has been going for counseling to a priest; they've had a marriage breakdown or they've had a severe illness or they’re suicidal…. They are very vulnerable to somebody taking advantage of them.”

There seemed to be an acknowledgement of that when the Congregation for the Doctrine of the Faith announced February 15 that it had found McCarrick guilty of “solicitation in the Sacrament of Confession, and sins against the Sixth Commandment with minors and with adults, with the aggravating factor of the abuse of power.” Social science research consistently points to the abuse of power as a crucial factor in sexual abuse of both children and adults.

Professor David K. Pooler, who has continued Garland’s work at Baylor by surveying 280 women survivors of clergy sexual abuse, has put together “A Guide to Best Practices” on how to prevent abuse and help those who’ve been victimized. “Critically, they will need to clearly understand the power structure in their organizations,” it says. “Survivors interviewed for this study agreed that appropriate power sharing can help make congregations safer. Thus, many of the best practices are embedded in a philosophy of shared governance, mutual respect, and conversation between congregants and church leaders.”

To get to the crux of the problem, the bishops will need to consider how something like this can be applied in the Catholic context. The meeting’s organizers plan to devote one day each to the themes of responsibility, accountability, and transparency; all of these topics apply as well to the abuse of adults.

The Baylor research is cited in a thoughtful fifty-six-page report that a task force of the Episcopal Church’s Diocese of San Diego issued last November. Offering many specific proposals, the report takes on responsibility (“Bishops, as successors to the apostles, hold a particular responsibility”); accountability, and transparency (“In an era in which it is increasingly understood that openness and transparency promote accountability, there is very little transparency into this diocese’s record of response to incidents of clergy sexual misconduct, both historic and recent”).

The Rev. Paige Blair-Hubert, chairperson of the task force, said by email that the report has been well received and is beginning to be implemented. When the resolution to create the task force was put before a diocesan convention in 2017, it specifically dealt with the abuse of women as well as of children:

It has been 15 years since the Boston Globe exposed the horrific sexual abuse of children by priests within the Roman Catholic Church. There is now a general awareness that clergy sexual misconduct occurs in all denominations; however, it is a lesser-known fact that adult women are more likely than children to be victimized by clergy. In fact, based on the size of our own diocese, statistics would suggest that scores of women who are active members of our congregations have been or will be victims of clergy sexual misconduct in their adult lifetimes.

Similar acknowledgement needs to come from the Catholic Church, as with other religious denominations.

Ever since a new team took over the Vatican communication apparatus at the beginning of the year, the public has been told to lower any expectations it might have for the coming meeting for the protection of minors. But even if church authorities find it necessary to dash such hopes: one can always hope.

Common Core: What if they gave a test and nobody came?