Selling the Bible in Cinéma Vérité 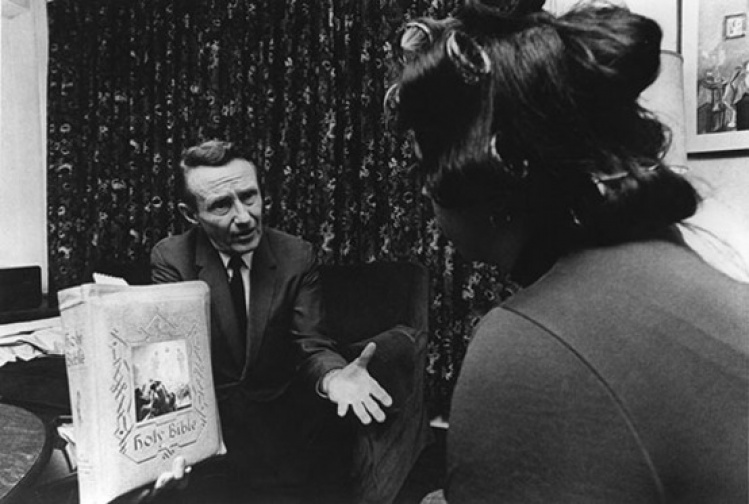 Flannery O'Connor said of her short story "Good Country People" that Hulga, the "lady Ph.D." whose wooden leg is stolen by a Bible salesman, is forced to face not just the physical affliction the object represents but also a spiritual one, namely "her own belief in nothing." Albert Maysles, who died earlier this month and who with his brother David made seminal and semi-notorious documentaries like Grey Gardens and Gimme Shelter, depicts no loss of limb, literal or symbolic, in 1969's cinéma vérité landmark, Salesman. But the door-to-door peddler of Bibles who emerges as the central figure of the film confronts no less significant a crisis of the spirit.

Paul Brennan and the other salesmen of Salesman seem not to have grabbed viewers the way Big Edie and Little Edie Beale or Mick Jagger and the Stones at Altamont have over the years. But since Maysles's death Salesman has received a fair amount of mention and was even recently aired by Turner Classic Movies (it's also part of the Criterion Collection and can be streamed on Hulu). Pay no attention to synopses that make throwaway allusions to Willy Loman; consider Salesman an early prototype for David Mamet's Glengarry Glen Ross. There's a similar adrenaline-and-anxiety-fueled mood, with manufactured optimism verging on self-delusion as the salesmen alternately hail and curse a system under which they're free to make money using nothing but their wits.

Of course, the big difference is that Salesman, shot with handheld cameras in black-and-white and ambient sound, isn't scripted drama. That the products being sold are the Bible, the Catholic Encyclopedia, the New Missal, and other Catholic publications adds a whole other component: The quartet documented by the Maysles seem obligated to place special faith in what they're peddling -- after all, these aren't vacuum cleaners.

The firm's theological consultant reminds the men of the "self-satisfaction" that comes with "going about their Father's business." Without losing sight of the fact that the job is first just a job, they're also not beyond characterizing it as something like a mission, not only to motivate themselves but also perhaps to assuage their guilt: most of their marks are poor Catholic housewives whose parish priests have encouraged them to fill out the lead cards the Bible company's salesforce uses to track them down. "If you can't sell a Bible..." is the truncated jibe that gets uttered more than once, both by company superiors and the salesmen themselves, whose workaday grind necessarily includes holding negativity -- "the ultimate sin" -- at bay.

The film follows the salesmen on their routes through snowy, working-class neighborhoods in New England; to a salesforce conference in Chicago; and finally on a ten-week swing through Opa-Locka, Florida. There are scenes of the men killing time in dreary motel rooms, playing cards and watching televised fights and trading war stories. A young, aggressive, and apparently successful salesman browbeats his beleaguered charges, using his own track record and pretty wife -- presented before them at one point like a trophy -- as proof of his method. There are numerous scenes of sales calls, with the men talking their way through half-opened doors and tailoring their pitches according to the dreariness of the abode and station of its inhabitants. A "positive attitude" is essential: One salesman says with a straight face that he fully anticipates "clearing $35,000 this year." That's close to a quarter-million dollars today.

But negativity is never far off, and it's Paul Brennan who proves most susceptible. It's not obvious at first: the self-designated "Badger" of the team is at one point filmed in sunglasses at the wheel of a rented convertible, cheerfully explaining the nicknames of his colleagues -- the Rabbit, the Bull, and the the Gipper -- and itemizing their strengths (persistence, optimism) and weaknesses (impulsiveness, lack of sophistication). He keeps his mates in stitches with knowing impersonations of the Irish-Catholic housewives they so often call upon. But as the film progresses and fewer sales are to be had, his good humor erodes, slowly but unmistakably. The Badger grows as sadly hangdog as Mamet's Shelly (the Machine) Levene, his plight almost too perfectly symbolized by his inability to find his way around Opa-Locka, with its ersatz Arabian street names and kitchy mosque-like city hall. When he loses his cool with a customer who says she can't afford the meager monthly payments on a $50 Bible, Brennan seems on the verge of an important self-realization: That, unlike O'Connor's heroine, he's been willing to believe in too much—in his own abilities, in the beneficence of American capitalism, in the assumed appeal of the product he's selling, and in, one suspects, the words contained within its covers.

Looking for a good scare