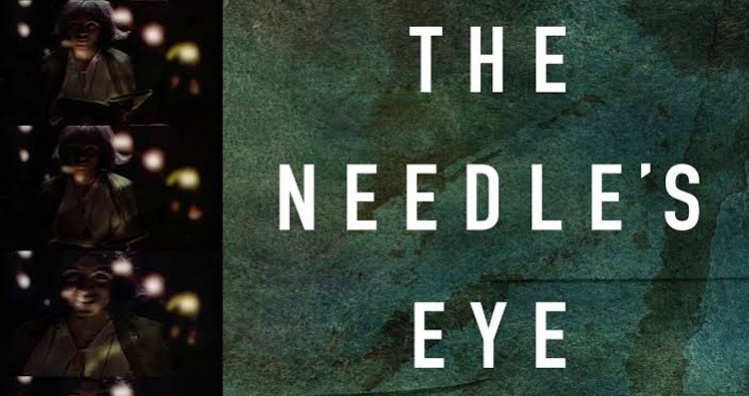 Apophatic theology: the attempt to say what God is by saying what God is not. It gestures toward God’s nature not by affirmation but by negation, not by saying but by unsaying, moving toward the light by entering more fully into the dark.

Let me try an apophatic approach to describing The Needle’s Eye: Passing through Youth, the newest book by the poet and novelist Fanny Howe. Howe is herself a deeply apophatic thinker. In The Needle’s Eye, she describes the poet’s search for “a lost language, the original thought in passing, unsaid, unrecoverable.” In an earlier poem, “The Apophatic Path,” she writes “what isn’t / is what is // and I can’t see / but know as no.” By saying what The Needle’s Eye isn’t, we can move toward saying what it is.

First of all, The Needle’s Eye isn’t a book about the Boston Marathon bombers, though the sad, violent lives of Dzokhar and Tamerlan Tsarnaev are referred to throughout. They might be described as the seed from which the book springs. Thinking through the brothers’ lives allows Howe to think through many other things: the radicalism of youth, which believes in a world of justice and happiness and lashes out, sometimes heroically but often monstrously, when told that such a world doesn’t exist; the essential, troubled relationship between politics and religion; the nature of historical trauma, which for the Tsarnaev brothers means both the “blasted wedding parties and family picnics in the high mountains of Afghanistan” that motivated the bombings and the physical and psychic damage that their actions wrought. But a reportorial account of a national tragedy this is not. (Those who want this kind of book should seek out Masha Gessen’s excellent 2015 The Brothers.)

The Needle’s Eye also isn’t a life of St. Francis of Assisi, though his radical vision of the world “as a single organism, each part vouchsafed to the other” serves as the book’s poetic and theological center, and though he is given the book’s final, beautiful words: “What we are looking for is what is looking.” And it’s not a book about Catholicism either, though Howe is herself Catholic and though the book considers, at various moments, liberation theology, the Cathar heresy, the Crusades, and the Loudun possessions as described by the French Jesuit Michel de Certeau.

The Needle’s Eye isn’t a memoir, though Howe glancingly, memorably recreates her time spent living in the down-and-out Bowery of the 1960s—“a place of personal failure, failure of nerve and failure to grow up, failure to love though there were friends, friends who were lost in exactly the same wide Bowery world.” And it’s not a work of literary criticism, though it includes a dazzling argument linking the poet George Oppen and the mystic Simone Weil, both of whom, like Howe herself, “hammered away at an impersonal, ethereal, needle’s-eye view of the world as seen by a single individual.”

It’s not a book of prose, though it begins like one (“Once upon a time in Uzbekistan there was a boy named Faroukh who had the soul of a poet”) and though the text tends to run up to the right-hand margin before breaking. And it’s not a work of poetry, though Howe uses many tricks from the poet’s toolbox: collage, juxtaposition, the manipulation of white space. Howe even includes several excellent shorter lyrics, like this one, “A Thought”:

To return to infancy: to be without speech.
The threshold between Eden and Heaven.
Ground and cloud.
Hollowed out, each image will lose its definition bit by bit.
An infant in Purgatory still covers her head with swaddling
Or is it the sunlight lying on the floor?
We try to domesticate our spirits like children.
We chase and chastise them until they change.
We spend our lives trying to release them again.

How does the life of the Tsarnaev brothers rhyme with the life of St. Francis?
sharetweet

Now that I have said what The Needle’s Eye isn’t, let me try to describe what it is.

It might be most fruitful to think about the book in filmic terms. In The Winter Sun (2009), Howe describes a moment of epiphany, one brought about through her longstanding love of film. (Moments of illumination, of light coming into darkness, are always important for Howe, and their play of light and dark always reminds her of film.) Dissatisfied with a piece of writing, she scattered its pages on the ground. Then, “reverting to my interest in film techniques, I began to move parts together according to theories of juxtaposition, montage, close-up, and distant tracking.” This literary deployment of filmic techniques was liberating, and Howe continues to use such formal strategies in The Needle’s Eye. The book’s short prose paragraphs resemble film frames—discrete images that, when read rapidly, create a feeling of continuity despite the regular jump cuts between different styles (now prose-like, now poem-like), time periods (now 2013, now the thirteenth century), and places (from Boston to the Bowery to the Caucasus).

We are asked to find contiguities and associations between apparently disparate images and stories. How, for instance, does the life of the Tsarnaev brothers rhyme with the life of St. Francis? What link can we find between Dzokhar, “a boy in a boat, his naked belly and ribs exposed to the night sky and its satellites,” and St. Clare of Assisi, sitting in her cell, “wait[ing], as if for the beam of a passing candle to float across her body”? This unitive vision, Howe argues, is exactly the kind of perception called for by film: “You see, on film, a figure appear, then disappear, and what you are asked to do is hold the still moment, the interior flash, for one reason only: to understand whatever it is that is about to be seen next as something from the past.” The reader of The Needle’s Eye does the same, appreciating the flash of a striking image but also holding it still, seeing how it prepares the way for the next, seemingly dissimilar flash.

In The Winter Sun, Howe offered this lovely description of film’s power:

If someone could step forth out of the screen with hand extended and offer us a sip of the cup of that silver elixir that makes the images flow, then we might drink and enter the third heaven at last. It is said that the third heaven is all light. Film is our great spiritual director. It shows us what it is to be a passing shadow.

Film “shows us what it is to be a passing shadow.” To be passing—to be transient, fleeting, in transit but always moving toward being past; to be a shadow—to be insubstantial, flickering, dark, but also surrounded by, made visible by, light. The book’s subtitle, Passing through Youth, suggests that youth is itself a time of passing: of moving from one time to another, from one mode of being to another, whether we like it or (more likely) don’t.

The central figures within The Needle’s Eye are those who don’t want to pass through youth and its belief in “an earthly utopia where justice reigns.” They refuse to move willingly into an adult, fallen world of “contrasts between rich and poor, citizen and immigrant, labor and management,” and this refusal leads to estrangement, even violence. St. Francis, sickened by power and calling for a radical rethinking of religion and economy, ultimately becomes disgusted even with those in his order: they were “like modern company men who can complain all they want because they belong to the system they murmur against.” Dzokhar watched the “news stories of occupation, invasion, destroyed cities and rivers.” He listened to his parents, immigrants from Kyrgyzstan “who were still enflamed and tormented by the recent past that drove them to America.” Then he decided to kill and maim rather than accept this kind of a world.

Speaking of Edgar Allen Poe, Howe writes, “The madness of Poe is the madness of suspended adolescence: his disbelief just won’t stop.” Disbelief in the world of adulthood is a marker of madness. But it also might be a marker of sainthood. The figure of the child “haunts us not as the fixed past but as something we gave up too casually because there was no other way.” What happens if we choose not to put away childish things? Beautiful things, perhaps; destructive things, more likely. Radical things either way.

“The Greeks,” Howe tells us, “understood that some boys were like hurricanes frenziedly dancing and destroying.” If The Needle’s Eye can be said to be about anything, it’s that: the violent poetry of youth.