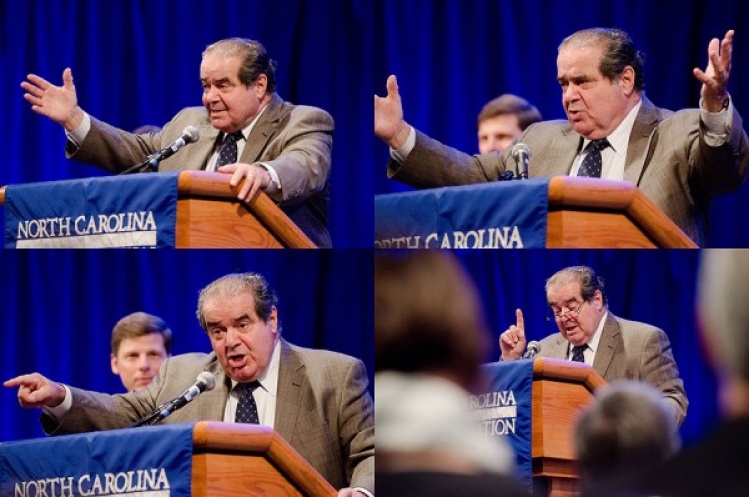 That was to the North Carolina Bar Association on Friday.  But today, Scalia and his colleagues struck down a law enacted by a 98-0 vote in the usually fractious Senate. Commonweal's editors predicted this "clear judicial activism" in their March 5 editorial. Now perhaps Commonweal's own legal experts can weigh in: Is Shelby County v. Holder the most "activist" Supreme Court decision of all time?

Let's see what the Senate's leader was saying about the Voting Rights Act all the way back in 2006:

Senate Majority Leader Bill Frist (R-Tenn.) called the vote a major success. "The Voting Rights Act has worked," he said. "We need to build upon that progress by extending expiring provisions."

Indeed, the Voting Rights Act has, on the whole, worked -- a fact demonstrated clearly by the ruling itself. Has it worked so well that it is no longer needed? This is unthinkable, as demonstrated by the long litany of abuses in Ginsburg's dissent, many of them from the 2000's. This is not even to mention more recent attempts to suppress voter turnout, as discussed in this 2012 Commonweal editorial.

Recall that during oral arguments, Scalia referred to the Voting Rights Act as the "perpetuation of racial entitlement." That inaccurate and offensive remark was likely to be forgotten over time, but with today's ruling, it will probably become the most memorable and quoted line of Scalia's career.

In the previous words of Commonweal's editors:

Scalia’s offhand reference to the “perpetuation of racial entitlement” was another startling reminder of why the VRA is necessary. The federal government goes to great lengths to ensure equal representation not as a generous gift to racial minorities, but because the right of all to vote and be counted is fundamental to our political system.

A right, not a gift.

“Tilled too much and kept too little”: An Outline of the Ecology Encyclical?