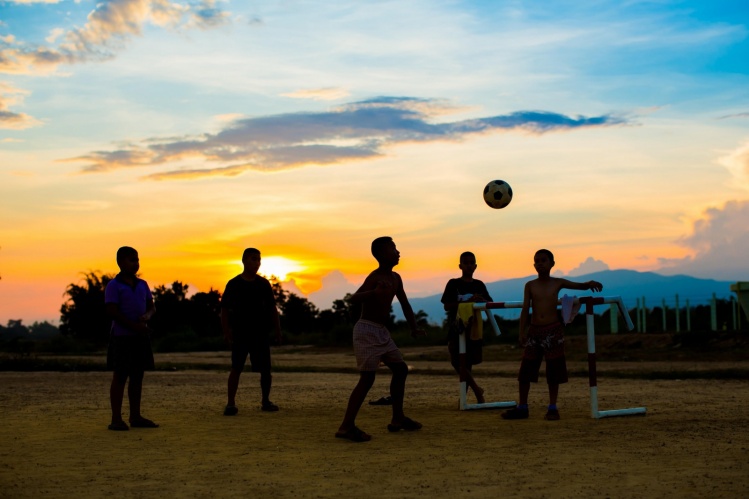 They called me Érico, my Brazilian friends. And that’s who I, as a teenager, became, living with my family in the center of South America for four years in the 1980s. I played their sports. I learned their songs. As my Portuguese advanced, our conversations deepened. We talked politics, futebol, faith, girls, music. I traded my steel-stringed guitar for one with nylon strings. I started to play in church and elsewhere, learning Brazilian songs along with the American ones they already knew.

The fascination was mutual. They wanted to know all about us and we were drawn, through language, closer and closer to them and their place. The flash of affection, the easy smile, the quick embrace: Who were they, to offer these things so freely? By my last two years in Brazil, I lived among my new friends more and more easily, more and more freely. This freedom, inexpressibly satisfying, somehow came from them: it was their gift to me. And then the adventure was over. It was time for college.

I couldn’t wait to return to the United States. I was still American, after all, and proud of it. Whatever freedom I had come to know in Brazil, I knew I would be freer still back at home. I was headed to college—ready to leave home, to leave childhood, to move toward whatever it was I would become.

Upon impact, college knocked Brasil right out of me. Suddenly I was in a fight for standing, for a portion of white middle-class America in which there was, I instinctively felt, little margin for other cultural identities. It was a furious—and comical—dash to reassert my true Americanness, lest I be left behind and alone.

What I came to see only much later was that it was precisely my Brazilianness that sparked any special interest my classmates showed toward me. At my Christian college, the spirituality I had discovered in Brazil suddenly sounded in a different key. The finesse version of futebol I played had little in common with steamroller American soccer. Much of the music I knew was different. The tastes that had formed me were unusual, off-beat, distinct. And fashion? Language? Eventually I found my way back into mainstream America—into the culture of cool, as I came to think of it—but not without walking through some chilly weather to get there.

What I did gain in college was friends, all Americans—though I was myself an unusual kind of American, as my friends occasionally let me know. It all worked out. Just as I had hoped, I felt more freedom as I moved toward American adulthood. I went back to Brazil for one summer following my sophomore year. But like many of my own students today, by summer’s end I was eager to get back to school and my friends there. Once more, I left Brazil behind.

To my shock, I found myself immediately and unsettlingly at home in Brazil
sharetweet

This time I stayed away for years. Brazil, and my own history with it, receded into a past that seemed discontinuous with my adult life. But by my thirties I was longing to return, having reencountered Brazil in graduate school through my study of Latin American history. For a host of ordinary reasons, it did not happen until I was in my mid-forties, a quarter-century after my Brazilian adolescence, when a two-week return to my teenage home suddenly became possible.

Seeing my old friends, both Brazilian and American, was a joy. But perhaps the deeper joy was the completely unanticipated experience of a different kind of communion—inner communion. To my shock, I found myself immediately and unsettlingly at home in Brazil, moving back and forth from English to Portuguese, eating the food, smelling plants and trees I hadn’t smelled in decades, staring at the impossibly starry sky, hanging out with high-school classmates. I told the father of one of my friends, “Somehow, sitting here, I can see my life whole in a way I can’t when I’m in the States.” What I, to my astonishment, had discovered, was both basic and profound: a part of me is Brazilian, shaped in Brazil by Brazilians. By submitting to them, to their ways, to their place, I had become, in some real fashion, one of them, in ways I had never understood.

The joy of reunion gave way, necessarily, to grief. After returning home I could feel Brazil receding. It felt like a kind of bereavement. And it wasn’t simply Brazil that receded, but also that part of myself I had discovered there. It was as though I could only see my whole self truly when I stood on Brazilian soil and breathed Brazilian air. I became once more a mystery to myself—or, rather, even more a mystery to myself—lost, if not in the cosmos, at least in the U.S.A.

What do we mean by the ubiquitous term culture? It’s a term that’s come to us via the social sciences, but no social science I’ve encountered has the power to explain the cross-cultural experience I’ve known. Something is happening in such experiences that social science’s vaunted empiricism can’t begin to touch. It has to do with the immeasurably real centrality of love in anything related to human endeavor, including what we today call cultures.

Cultures, like relationships, are constituted by various kinds of love. And this includes the love we call eros: that love that seizes our soul with a passion that promises life in its very essence. As millions of radios around the world testify, eros writes the songs that thrill and mold us. Solomon’s Song of Songs endures as the supreme testament of eros’s beauty and priority. Renewed by desire, we sing new songs, caught up and transfigured by the splendor our loves reflect—whether love between two people or among a people. Absent this love our songs fade, and with them a part of us fades too. We’re left lonely for ourselves, for that communion that touched us and that we had touched, that made us and that we helped make. This diminished passion is something all lovers know. And fear.

The plight of the so-called “third-culture kid” (TCK) is to be strung up and stretched between cultures. This is a precarious way to grow up, as the psychiatric history of my own TCK cohort makes acutely clear. Human beings are made for communion. TCKs know as well as anyone what’s at stake when that communion fails—when the yearning to belong meets a barrier, no matter how generous the intentions of the parties on either side.

At another level, though, the TCK experience is simply a radical form of the clash we all know as we travel between worlds—the worlds of our father’s family and of our mother’s, of work and of home, of college and of church. It’s no easy place for any of us, this in-betweenness. But it’s also not without its own kind of joy. When on a yet more recent trip a Brazilian friend dubbed me “the most Brazilian American in the world,” I felt a rush of happiness—even though I knew he was also saying that I wasn’t quite one of them. Neither quite Brazilian nor quite American, yet somehow both.

My happiness at his quip quickly gave way to a pang of longing. What have I missed by not living a more Brazilian life? I can’t help but wonder. We all suffer such pangs. But in the midst of our longing we catch glimpses of a coming wholeness: glimpses that brighten our eyes, straighten our backs, and move our feet.

My more recent visits to Latin America have imparted a taste of the world to come as sweet and clear as any I have known, a quickening of identity, a sense of liberating communion. It is a preview of a coming attraction, when we in all our fantastical particularity will be renewed in God’s oneness, free as never before to be the people God made us to be. All the parts that were scattered in this world will be drawn together into a whole, and we will know each other—and ourselves—not in part but in full.