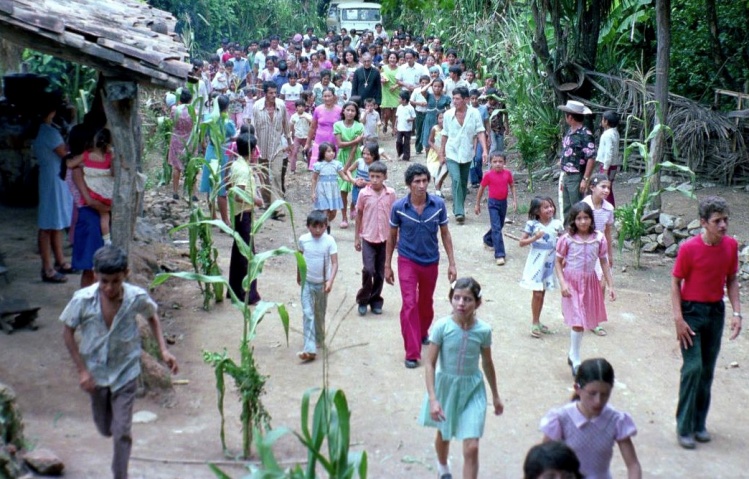 On this anniversary of Romero's death, I want to share one of my favorite pictures of him. In many ways it is the same image whether or not the priest in black figures in the center of the photo. Romero is famously quoted saying "If they kill me, I shall rise again in the Salvadoran people" weeks before he was shot while saying mass. Pass through any poor neighborhood in El Salvador (which is about 90% of the country) and you see evidence of this in hundreds of colorful murals painted in his honor. Behind these Romero-painted walls are often community centers, schools, clinics. Inside certain walls tens (in some places hundreds) of photos of the local dead hang to be remembered.

One such community center, or comunidad de base, in the San Ramon neighborhood of the capital San Salvador is named Pueblo de Dios en camino (the "people of God walking" or "on the path"). The reason Pueblo exists is to meet the needs of the community. I do not know the full scope of the programs they provide but I know they are essential. My role when I visited weekly during my semester abroad was to accompany and learn from a "delegate of the word" named Hector. We carried sacks of rice, sugar, sometimes beans, sometimes nothing two miles up the steep side of the San Salvador volcano to an isolated community of Evangelical Christians who'd remained on the land they once came to as hired coffee harvesters. The farm has since moved to more profitable soil, and the people of Las Nubes ("the clouds") remain in tin-roof huts with no running water, electricity, or right to the land that would enable them to demand these things. Hector spent the day sitting in plastic chairs in the cleanly swept dirt-floor living rooms of these families and listened to their needs. Listening was essential before deciding on the right action; Romero practiced and preached this. Pueblo began organizing a system to pipe water from a tank at the base of the volcano up to Las Nubes in 2010. They completed it last year. It is one of many similar projects.

On Sundays they have Mass (or "Celebration of the Word"), with or without a priest. For a while it was two Belgian priests who came to visit, I was told on my first day there by the woman in charge--but no one here had seen them for a while. "It's not important, because we have the body of Christ here," she said. The readings follow the liturgical calendar. Each week a different member of the community is selected to share how the gospel reading "was lived" that week for him or her (Romero was quoted often, often more than the gospel). At the appropriate time, a large amount of bread was distributed to each of the families, and we drank SalvaCola out of Styrofoam cups.

Six months in El Salvador, the country where Archbishop Oscar Romero was killed for practicing his faith, taught me the true meaning of church. Romero's upcoming beatification means, for many people, a just truth finally becoming officially true. His prediction was correct.

When 'Aggression' is Police Protocol