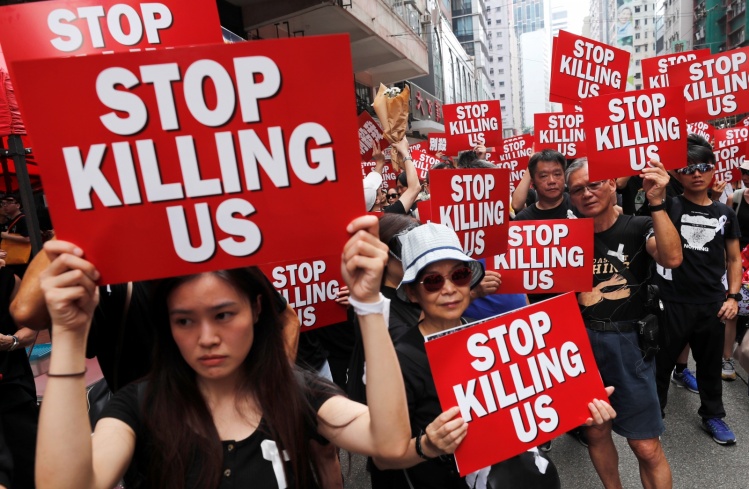 “Liberate Hong Kong, revolution of our times.” The slogan, heard throughout Hong Kong, expresses the urgency gripping the city over weeks of massive public protests. Hong Kong is a “special administrative region” of China and has existed alongside it under a policy of “one country, two systems” for twenty-two years. But the tenuous autonomy Hong Kongers enjoyed has increasingly felt threatened. The first protests were sparked by a proposed bill allowing Beijing to extradite people in Hong Kong to the mainland; in June, more than a million Hong Kongers took to the streets to rally against it. Soon after, Carrie Lam, Hong Kong’s unpopular, Beijing-approved chief executive, in a nonbinding statement, declared the bill “dead”: but by then momentum had built for a massive movement in favor of democratic reforms.

As of writing, there have been protests for ten consecutive weekends, with demonstrators taking to the streets, the public-transit system, and the city’s international airport. Police have fired thousands of rounds of tear gas, and more than six hundred protestors have been arrested. The protestors’ primary demands are for the formal withdrawal of the extradition bill and for the resignation of Lam, who wasn’t elected by a majority vote. But underlying grievances against Beijing have also risen to the surface. Protestors are angered by the disproportionate influence of money and private interests on their government. They condemn triads, organized criminal syndicates thought to be working with Chinese officials and local police. They demand a third-party investigation into police brutality in Hong Kong. And they’re fighting for universal suffrage, or the right of the Hong Kong people to elect their own government. As it stands, a Beijing-backed nominating committee screens candidates before they’re put on the ballot, which means that elections carry little risk of upsetting the status quo. Just last year, the government banned the pro-independence Hong Kong National Party.

Absorption into the People’s Republic of China would invite greater systemic corruption, while severely limiting freedom of speech and assembly.
sharetweet

China has blamed “external foreign forces” for the protests, pointing to meetings held in Washington between Hong Kong pro-democracy advocates and U.S. leaders this past spring. It’s true that Hong Kong has long been home to mainland dissidents and migrants and has a more open, liberal culture than the mainland. But this is partially why China needed Hong Kong as its “window to the world” in the 1990s, around the time of the handover. Now that China is one of the world’s most formidable powers, with a GDP over thirty times that of Hong Kong’s, Beijing feels it can exert control as it has long wanted to.

This does not come as welcome news to the people of Hong Kong, 71 percent of whom said in a recent survey they didn’t feel proud about being Chinese citizens. Resistance to Chinese authoritarianism is virtually embedded into the culture of the city. There were the widespread rallies in 1989 against the Tiananmen Square massacre; in 2003, protests boomed following a proposed national-security bill that limited civil liberties. In 2014, Hong Kong’s “Umbrella Movement”—named for protestors who held umbrellas to ward off tear gas—fought for universal suffrage after Beijing made it clear that only Chinese patriots could run for office. (This April, nine of the movement’s core organizers were imprisoned.)

But this time around, with Hong Kongers engaged in a fight for their own political survival, the word “protest” does not seem adequate. The city is deeply capitalistic, built on neoliberal notions of privatization, and this in combination with China's authoritarian reach has made life difficult for many ordinary people in Hong Kong. One in five people live below the poverty line. The government owns almost all of Hong Kong’s land and levies astronomical property taxes, which disproportionately affect the rents of people who are low-income. But absorption into the People’s Republic of China would invite greater systemic corruption, while severely limiting freedom of speech and assembly and all but ending hope for democratic representation in government. The rest of the world—particularly the West—seems apathetic toward Hong Kong’s precarity. Few foreign politicians have spoken out about the protests, and there is a sense that Hong Kong is truly on its own.

With China approaching the seventieth anniversary of its Communist government on October 1, the fear of military action in Hong Kong, on the level of Tiananmen Square, looms over protestors. Yet Hong Kongers seem defiantly hopeful. In the words of one protestor, “The escalation of punishment demands an escalation of sacrifice.” But perhaps another common saying among protestors explains the struggle best: “We alone can save our Hong Kong.”