What happens when sectarianism morphs into insanity?
By Lucy Grindon 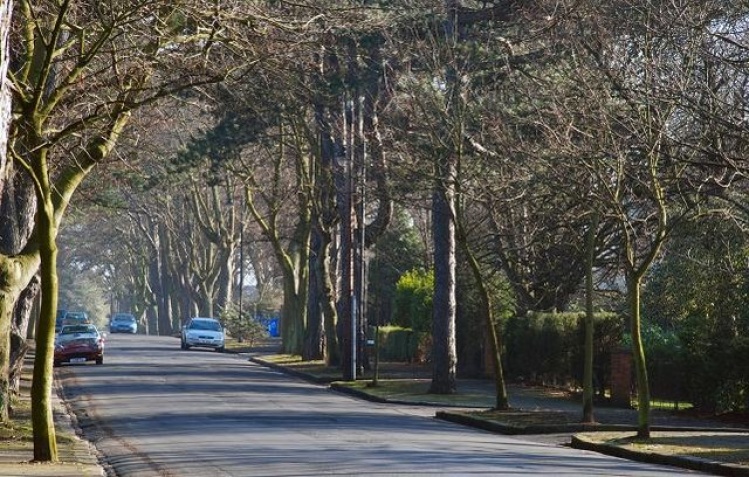 Cyprus Avenue, a new play by David Ireland that closed its New York run at the Public Theater in July, opens with a disturbing question. The main character, a Northern Irish unionist named Eric, played by Stephen Rea, asks his therapist, “Why are you a n*****?” It’s always a shock to hear that word, so much so that I didn’t notice the question’s bizarre implication that one’s race is a matter of choice. Eric is obsessed with racial and national identity, and particularly vehement about his own allegiances. At the beginning of the play, when his therapist casually calls him Irish, he retorts, “I am unquestionably and non-negotiably British. I am anything but Irish.” But as the play zooms backward in time and then progresses forward, Eric’s self-definition is deeply shaken and he turns on his own Protestant, British family.

Eric lives on Cyprus Avenue, a posh street in the heart of Belfast, the capital of Ulster (the unionist name for Northern Ireland). Virulently racist and violently anti-Catholic, he loves being English and loathes nearly everyone around him. In no time at all, he spits out another slur: Fenian (a derogatory word for an Irish Catholic). Other characters balk whenever he speaks it, which is perhaps too often. Soon, Eric’s deep-seated hatred of Catholics is irrationally directed at his infant granddaughter, Mary-May. The first time Eric holds her, he says she has “Fenian eyes” and accuses his daughter of having conceived her with Irish Nationalist leader Gerry Adams. Then he starts to believe that his granddaughter actually is Gerry Adams. As Eric becomes totally detached from reality, his insanity manifests as stronger and stronger anti-Catholic and anti-Irish feeling. His daughter protests that unionist/nationalist and Protestant/Catholic distinctions are no longer relevant twenty years after the turmoil of the Troubles, which she and her young peers can barely remember. But Eric can’t accept this. He defines himself by loyalty to Protestant Britain and complete rejection of Catholic Ireland; if the conflict between them has ceased to matter, then he himself no longer matters.

Even as Eric spews hatred about the Irish, he recounts experiences that have undermined his sense of separation from them. He tells his therapist how he once found himself drawn into a pub because a song from inside beckoned “Come in if you’re Irish” to passers-by. He entered cautiously, afraid that he would be found out as British and attacked—instead, he was welcomed by the singing pub-goers without so much as a sideways glance. As he sat enjoying a Guinness and absorbing the revelry around him, he allowed himself to accept the possibility that his ancestry could be Irish, that perhaps he had been made to feel British by generations of colonial violence and oppression. He’s attracted to Irish joviality, but he believes so fiercely in loyalty to one’s own and rejection of the “other” that he cannot embrace anything Irish without claiming to be Irish himself.

Unfortunately, Eric’s old prejudices stop him from holding onto any momentary redemption or Irish kinship. At one point, he meets a unionist terrorist—likely a hallucination representing his own violent prejudice toward Irish nationalists. He shows this terrorist his granddaughter, hoping that he’ll see the resemblance to Gerry Adams in her “Fenian eyes”—but the terrorist tells Eric that she has his eyes. Far from being an Irish invader in his pristine British bubble, she is the proof of his personal connection to the Irish.

Unable to live with the possibility and complications of a dual identity, Eric becomes convinced that he must destroy his granddaughter to save Ulster—and by extension his own Britishness—from Irish Catholic nationalists. In an escalating series of scenes at the end of the play, he murders his daughter, his wife, and finally Mary-May.

A less violent Cyprus Avenue might have been just as effective, if not more so. The neck-breaking, the gun-shooting, the smashing of a plastic infant against a wall: all had audience members cowering in their chairs, perhaps too traumatized to internalize any message. The play’s most enthralling sequence was an uninterrupted monologue from Rea that must have filled more than half of the run time. He paced around the square stage, speaking feverishly but with amazing lucidity and immediacy. The other actors were also impressive, especially Amy Molloy, who delivered a believable blend of loving concern and horror as Eric’s daughter Julie. But their characters’ only functions were to react to (then be killed by) Eric. Had the play de-emphasized violence and given its five-person ensemble more opportunity for expression, it would have been just as entertaining and even more profound.

At times, Cyprus Avenue is bitterly funny. It feels like a dark comedy, but it’s ultimately a drama about what can happen when prejudice and psychosis mix. A reviewer for TIME OUT New York remarked, “Certainly racism can be like madness, but it’s not actually useful to pretend it’s the same thing as psychotic derangement.” Mostly, I agree. Watching the play unfold, I was frustrated that what could have been a straightforward, powerful indictment of sectarianism was convoluted by Eric’s insanity, which partly absolves him. His violence against his family does make an important point: bigots can be just as harmful to those close to them as they are to those they hate. Still, Eric’s state of mind makes it too easy to dismiss the play as a tragedy about a man going insane when its true aim is to raise questions about prejudice and identity. How are our self-categorizations tied to hatred of others? How often do we focus on who we are not rather than focusing on who we are? And how can our conflict-based identities lead us to commit destruction?