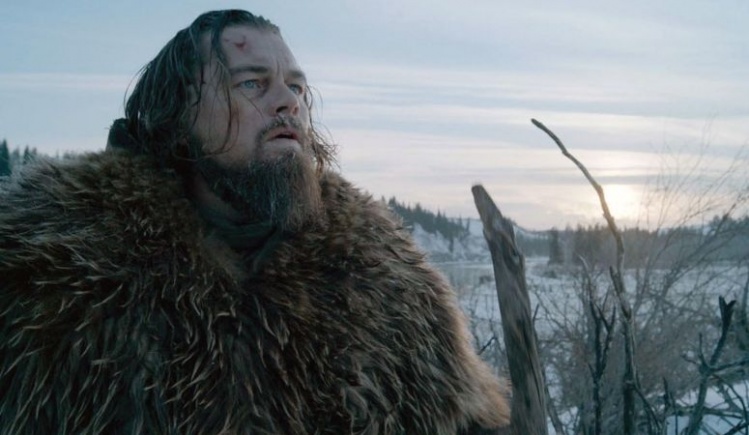 One of the first shots The Revenant presents us with is a wide view of a wintry landscape somewhere in the Louisiana Purchase territory in 1827. A group of trappers are gathering their goods for the long trek home. Suddenly, a gob of half-frozen rain blows straight at us and smears a bit of the screen. Forty years ago this would have been considered a technical gaffe and ended up on the cutting-room floor. But nowadays we’re used to this sort of thing in documentaries, and that bit of sleet announces that The Revenant, based loosely on a true story, is being shot like a documentary. No constructed sets, no snow-wind-rain machines, no blue-screen digitalization. Rather, this period piece was filmed under harsh conditions (in Canada and Argentina)—real cold, real ice, really shivering actors—in order to give audiences a time-travel experience. The good news is that the movie, for most of its running time, really is just that vivid. Very few historical films have achieved this degree of physical verisimilitude. The bad news? This verisimilitude may be The Revenant’s only great achievement.

The story’s hero, Hugh Glass (Leonardo DiCaprio), is a resourceful scout respected by most of the members of the hunting party, though the presence of his half–Native American son, Hawk, arouses the paranoia of a shifty, possibly psychopathic mountain man named Fitzgerald (Tom Hardy). When Glass is nearly torn to pieces by a bear and left behind, the men assigned to guard him, Fitzgerald and the adolescent Jim Bridger, abandon him in a shallow grave. Hawk tries to stop them, but Fitzgerald murders him before his helpless father’s eyes. The half-dead Glass drags himself over miles of dangerous terrain to his company’s fort to take his revenge.

The director, Alejandro Iñárritu, and his genius cameraman, Emmanuel Lubezki, have contrived some amazing and memorable sequences. For that bear attack the camera presses down on Hugh as closely as the animal does. We feel each slash and crunch, and, to add disgust to injury, see the dribble of the bear’s slobber trickle down on Glass’s face. This is skin-crawling enough, but after the beast retreats to the far background of the shot and we start to feel relief, the grizzly charges forward again. And again. The entire scene is filmed from a low angle so that we stay trapped right beside the victim.

I’m tempted to call Iñárritu the maestro of engulfment, because he achieves his best effects by perching the viewer on the shoulders of his actors as they head into danger or comic embarrassment (Birdman) or moral quandaries (Amores Perros, 21 Grams). When Michael Keaton in Birdman has to take that hilarious detour around Times Square in his underwear, we make the entire jog with him in one unedited shot. In The Revenant this same method is used for thrills rather than laughs. We’re plunged into the midst of hand-to-hand combat, onto river rapids, down snowy mountainsides. These thrills would serve to make The Revenant a classic adventure story if only its creator were content with that. But Iñárritu aims higher.

From the start we know that Glass isn’t just trying to survive but searching for revenge. And, whatever our ethical view of revenge, we can’t help being on his side. Yet we soon come to feel that The Revenant is far too intelligently and lovingly made to be a simple revenge story; something more must be at stake. But what exactly? Are we watching a spiritual education as well as a trek?

The movie encourages this speculation. Iñárritu does hint at what is happening to Glass’s mind as well as his body, but the hints remain only hints. Glass has visions of his wife, who, in flashbacks, is shown murdered by soldiers (though in what war or conflict we never find out). One rather risible special effect has her floating above his supine body. Why floating? Wouldn’t her bereaved husband want to imagine her physical closeness, her sensuous, earthbound presence? He also hears her muttering something in her native language, words that sounded cabalistic to me, but no subtitles translate them. Glass also has visions of his son, one showing the boy near a Christian church. Was Glass a Christian? Was his son? No answers are forthcoming, so are these images necessary to the story or just whims of the director?

The treatment of Native Americans throughout the film is suggestive. Parallel to Glass’s odyssey is the search by an Arikara Indian named Powaqa for his daughter, who has been kidnapped by a rival tribe. But what is the meaning of the parallel? Is Powage’s loving quest for reunion supposed to be some sort of reproach to Glass’s quest for vengeance? Perhaps. If so, it is an odd reproach since, as far as the audience knows, Glass is simply seeking to bring a criminal to justice.

But at least some sort of Native-American admonition is at work here, especially in Glass’s meeting with Hikuc, a kindly and philosophical Pawnee whose loved ones have also been murdered. Pawnee tells him that “revenge is in the Creator’s hands.” Which leads us to wonder if Glass will refrain from killing if he ever gets the chance. Of course, he does get the chance and, though I don’t want to spoil the ending, I have to report that the denouement is one of the phoniest, most contemptible cop-outs a major film has ever stooped to.

For me, the moral and artistic confusions of The Revenant became even more striking when I revisited the 1971 version of the same story, Man in the Wilderness, starring Richard Harris and directed by Richard Serafian. Not for a moment would I suggest that Man in the Wilderness has the cinematic power of The Revenant’s best sequences. The cinematography is handsome but conventional—almost placid in comparison with Lubezki’s dynamic rawness. Harris’s acting is more than competent, but the director never asks as much of him as Iñárritu demands of DiCaprio, a constantly improving actor who is formidable here. Even the bear attack, though gruesome enough, doesn’t frighten us the way the new movie’s mama grizzly does.

But the older movie’s script, by Jack de Witt, has a perspicuity about character transformed by suffering that Iñárritu’s film entirely lacks. Despite DiCaprio’s talent, the actor can’t tell us what is happening to Glass’s mind while the director is distracting us with corny mysticism, vague mutterings on the soundtrack, and unhelpful subplots. De Witt’s script gave Harris a through-line of psychological development that defined the hero as a man embittered by the death of his wife and unable to draw on the consolations of religion or philosophy. But that changes during his agonized trek after the bear attack. Keeping himself hidden from possibly hostile natives, he nevertheless observes them and learns from their suffering. He sees the slaughter of a mixed-race family and helplessly watches a Native-American woman give birth in the wild all alone. Death and birth and his own travails reawaken his visceral love of life, and, because of that love, he forgives those who abandoned him. This is a fulfilled dramatic arc, and that’s precisely what The Revenant, for all its visual brio and stirring action, does not have.