Michael Keaton in a Near-Masterpiece
By Richard Alleva
Movies 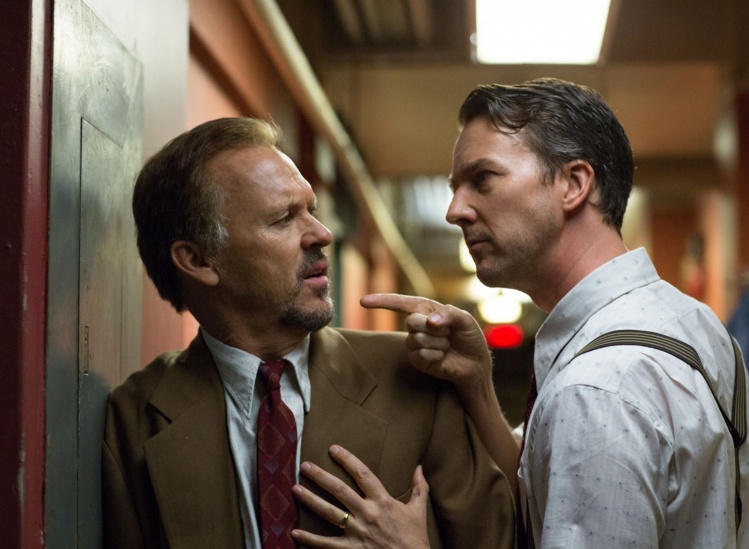 We’ve all seen terrific movies about the theater—All About Eve, Les Enfants du Paradis, Topsy-Turvy, among many others. And if you’re familiar with the tropes of the genre—booze and drugs in the dressing rooms, the actress whose ambition competes with her desire for home and children, the overweening critic vowing to destroy an actor’s career—you won’t be surprised by many of the plot ploys of Birdman, or the Unexpected Virtue of Ignorance. Yet director Alejandro González Iñárritu has made something that looks and feels unique. By confining most of the action to the interior of one real Broadway theater, the St. James, with only a few excursions outside to the surrounding Times Square area, he lures us into a gratifying confinement: we find ourselves locked in with a small band of theater animals and must abide by the morals and manners of their jungle. And by having us observe the work ethic of actors, one might even say their workaday honor, instead of titillating us with the backstage soap opera of love lives and career jockeying, Birdman brings us closer to the gritty struggle to make theater art than any other movie I’ve seen (with the exception of Mike Leigh’s superb Topsy-Turvy).

When Riggan Thomas (Michael Keaton), a middle-aged ex-superstar trying to revive whatever artistry survives within him, works with the obnoxious but gifted Mike (Edward Norton) on a scene that was inert before Mike’s hiring, we watch a lengthy medium-shot of the two seated actors facing each other. They volley lines, eliminate excess verbiage to tighten the rhythm, adjust their deliveries according to the shadings and nuances each hears in the other’s voice, find the right tempo, and discover where the climax has to come. All this could have been staged conventionally in alternating close-ups, but the cutting would have hobbled the momentum. With both actors in view, we sense the dramatic current flowing between them and our excitement mounts with theirs. Rehearsal over, Mike cocks his head back, smiles conspiratorially at Riggan and grunts. The grunt means, “We’re on our way, aren’t we?” Congratulation and self-congratulation.

Once we take the work of such actors seriously, it becomes difficult to dismiss all the backstage snits, tears, tantrums, and intrigues as so much stereotypical theatrical fluff. These hardworking monomaniacs don’t go into downtime easily; the pre-performance Sturm und Drang is the warm-up for the fireworks on stage. And even the most hackneyed situations in this script by Nicolás Giacobone, Alexander Dinelaris Jr., and Armando Bo are redeemed by the quality of the dialogue that is by turns inventively nasty and economically poignant.

The movie’s central story—the come-back of a has-been who stakes all on a production he writes, directs, and stars in—could have been the most clichéd element in Birdman, but Iñárritu and his writers make good use of it by zeroing in on two themes that are timely and interesting. And not just to theater buffs. Riggan Thomas gained international movie stardom by making a string of superhero movies reminiscent of the Batman franchise. Not coincidentally, Keaton himself helped launch the whole blockbuster superhero craze of the last two decades by starring in Tim Burton’s two Batman films. And like the actor he plays in this film, Keaton found his career fading after his last performance as a superhero. The former Birdman is now trying to redeem himself with an almost absurdly high-minded project, an adaptation of Raymond Carver short stories. Riggan finds himself nagged and insulted by his old alter-ego: Birdman is simply that part of his mind that longs for all the celebrity perks and big money and press attention of the Hollywood years.

But Riggan resists Birdman’s grumblings, and it’s a real strength of this movie that it makes us understand why. In the world we now live in—the Andy Warhol world where people are famous for being famous—solid achievement is more detachable than ever from celebrity. Clearly, Riggan still hungers for the fame that proved evanescent. He tells his supportive ex-wife (played with poignance and strength by Amy Ryan) a painfully self-revealing memory of being on a flight with George Clooney and speculating that if the plane went down, the next day’s headlines would be about Clooney, with only a few bottom-of-the-page remarks about himself. So why is he bothering with Raymond Carver instead of finagling his way back into blockbusters? Because early in the actor’s stage career the great writer had sent a cocktail napkin backstage thanking Riggan for a memorable performance. The two anecdotes balance each other. The hunger for fame has been overtaken by the hunger for honorable work, but the less admirable hunger persists and irritates.

THAT THEME OF professional dedication is challenged by a second theme: the necessary selfishness of the serious artist, the selfishness often a corollary of the dedication. Riggan is willing to mortgage, perhaps lose, the house his ex-wife has always intended for their daughter Samantha, who is now recovering from drug addiction. And the actor’s efforts to reunite with his child by making her his personal assistant are hampered by his absorption in his production and performance. Still in love with his ex-wife, he nevertheless doesn’t dare to distance himself from his lover, who is also his play’s leading lady (a bristly, funny, and tough Andrea Riseborough), for fear of upsetting her performance. One of Bernard Shaw’s characters declares that money is not made in the light. Neither is art.

Conveying all this chaos, camaraderie, and pain is a cast that works with such ensemble perfection that I hesitate to single anyone out. But I will anyway. Michael Keaton’s bursting energy made his Beetlejuice unforgettable in Tim Burton’s masterpiece, and his Dogberry unbearable in Ken Branagh’s adaptation of Much Ado About Nothing. Now the older Keaton tamps that energy down and turns it into an inner fire, convincing you that Riggan is always watching, always caring, and always suffering because he can never seem to do the damage control necessary to keep work life and personal life in equipoise. Edward Norton’s Mike is both the artistic gift that keeps giving and a constant pain in the ass. Emma Stone, who plays Samantha, impresses me again in this performance. She is, in my opinion, one of the two best movie actresses under thirty (along with Jennifer Lawrence). She makes every word of a diatribe against her father slice and dice—and how her chin juts out in her fury!—but when she finishes, the camera doesn’t pan over to Keaton to get his reaction; it stays on her face and we see just the beginning of remorse take hold of her. Iñárritu gives his actors time to breathe so that we can see their emotions slowly shift or expand.

Critics have remarked on the virtuosity of Emmanuel Lubezki’s long takes; the whole film is made to look like one long, continuous shot (an illusion, of course, accomplished, as it was in Hitchcock’s Rope, by covering the seams between shots with some technical sleight-of-hand.) But what counts is not the virtuosity of the camera work but what it does for the story. The lengthy travelling shots through the labyrinth that is the St. James Theater—through lobby, corridors, dressing and costume rooms, into the wings among lighting boards and stagehands—seem like a tour through some vast machine whose output is emotions and dreams. No wonder these actors give the impression of being willing slaves. They are being devoured by what they love.

There’s a fly in the ointment, and the fly’s name is Federico Fellini. Perhaps Iñárritu couldn’t help feeling the shadow of the Italian director’s masterpiece 8 1/2 because it, too, was about a director coming to the end of his tether. Like 8 1/2’s hero, Guido, Riggan periodically escapes into a fantasy world. Guido’s daydreams both confirmed and deepened what the more realistic scenes told us about him. But when Riggan’s fantasies have him take on Birdman’s powers of flying and telekinesis, a contradiction blurs our view of the actor’s inner life. Though he still longs for the perks that playing Birdman gave, he never felt empowered by the character. Quite the opposite, in fact, since the superhero role cheapened his talent. When, near the film’s climax, he fantasy-flies above Times Square, we shouldn’t see him, as we do, wafted aloft in Birdman’s arms. It’s his growing power as a theater artist that empowers him spiritually, so it would make more sense, and be more dramatically effective, if we saw him fly away from Birdman.