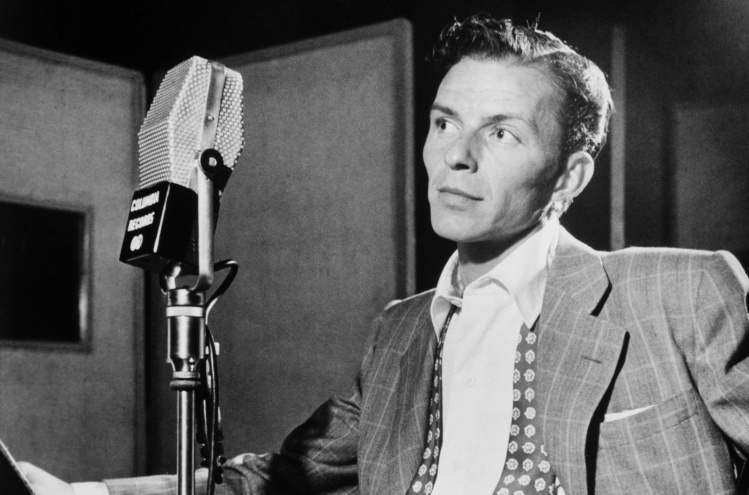 Portrait of Frank Sinatra at Liederkranz Hall in New York by William P. Gottlieb, circa 1947

Suzy Hansen’s Notes on a Foreign Country: An American Abroad in a Post-American World (Farrar, Straus and Giroux, $26, 276 pp.) has gotten a good deal of attention, and deservedly so. Hansen, an American expat who moved to Turkey in 2007, grew up in New Jersey, and made her way into New York journalism after the University of Pennsylvania. She is disarmingly candid about the many things she didn’t know about the military interventions and economic machinations of the United States abroad over the past seventy years. She discovers, for example, that the United States first used napalm in Greece during the civil war that broke out immediately after WWII, and that U.S. support for coups in Turkey, Iran, and other places is remembered bitterly in those countries even if these incidents are forgotten or were never known by most Americans. Hansen writes well, especially about architecture and cityscapes. On assignment in Kabul, she observes that “the Afghan elite lived in enormous ‘poppy palaces,’ the Central Asian disco version of a McMansion, homes so unbearably ugly and ostentatious, they seemed to be engaged in satire.”

Notes on a Foreign Country is a coming-of-age tale. The foreign country of the title is not Turkey but America, and Hansen’s ambition is to show how the United States is perceived by those who have had to grapple with U.S. preeminence, especially those in the Middle East. It is also an examination of how her own very American preoccupations and prejudices prevented her from understanding the “foreigners” she was often writing about. Perhaps most of all, it is a love letter to Istanbul, the ancient city where Hansen has found a society and a culture that compelled her to shift her perspective in a way that enabled her to see herself and America more clearly. She explains how she came to appreciate what Islam means to many Turks and others around the world, and why it is a mistake to see a strong religious identity as a threat. She does not make a case for the superiority of Turkey, and she doesn’t hesitate to criticize bad actors, regardless of where they were born. But she insists that looking at the United States from a distance puts American pretentions to exceptionalism in context. “America First” has long been our calling card. Or as she writes, “Denial and forgetting were critical to the patriotism that held the idea of the Turkish nation together, and to its nationalism. They had been crucial to America’s nationalism, too.”

Two other Americans who found living abroad deepened their sense of human possibility were the literary couple Shirley Hazzard and Francis Steegmuller. Hazzard, originally from Australia, was a brilliant novelist (The Transit of Venus, The Great Fire), and Steegmuller a distinguished translator and biographer, best known for his translations of Flaubert. They made their home in New York City, but every year would spend a month or more in Naples, a city of monuments and churches, a place relished for its palpable sense of a still-present past, as well as for its “squalid” vitality. The essays in Ancient Shore: Dispatches from Naples (University of Chicago Press, $18, 112 pp.), were written over many years. Italy is a place, Hazzard writes of her first visits, where “the cult of leisure flourishes still and where variety and pleasure can fill up many, though not all, days.” In the aftermath of WWII, it offered an “admixture of immediacy and continuity, of the long perspective and the intensely personal.” Hazzard further discovered that “the ability to rise to the moment, to the human occasion, is linked to a sense of mortality intrinsic, in Italy, to all that pleases us.”

If, for whatever reason, you don’t cotton to Sinatra, Hamill just might convert you.
sharetweet

In Ancient Shore, these two immensely learned people move appreciatively among the remnants of Naples’s Greek, Roman, Renaissance, and Bourbon past while navigating a city of motorbikes speeding by on narrow streets. Steegmuller’s frightening encounter with one of Naples’s uglier but all-too-common incidents anchors the book. While he and Hazzard are walking together, his bag is ripped from his hands and he is knocked to the ground and dragged by two thieves on a motorbike. His shoulder and nose are broken, as well as a tooth. Steegmuller’s meticulously observed recreation of the incident and the excellent medical attention he received in rundown and poorly equipped Italian hospitals is a tribute to how important the human presence and touch is to the sick or injured.

Returning to New York, to its magnificent hospitals, brilliant doctors, and “interminable waiting,” Steegmuller laments “a sense of removal from the normal reciprocity of existence,” something abundantly present in shabby Naples. Suffering a relapse, he remains in a New York hospital for a week. There “even the kindest of my new hospital attendants—and many were very kind indeed—spoke to me across an artificial barrier of polysyllabic indirection, where my ‘stressful situation’ was being ‘checked out,’ and where I could never simply be told but must everlastingly be ‘notified’ of my ‘ongoing status.’ All my Neapolitan rescuers had used direct, expressive words, words still vigorously derived from human experience; none had...been persuaded to embrace pretension in the name of professionalism.”

Speaking of the Italian genius for speaking to and from the heart, even if somewhat cynically, Pete Hamill’s Why Sinatra Matters (Little Brown, $26, 187 pp.) is required reading for any true believer. In my early twenties, smitten as I was with The Band, James Taylor, and Crosby, Stills, Nash & Young, I came upon an album of Sinatra singing Cole Porter songs. Nelson Riddle was the arranger. It was a revelation. Hamill, a novelist as well as a great journalist, knew Sinatra, at least socially. One of his claims is that Sinatra “perfected the role of Tender Tough Guy…creat[ing] a new model for American masculinity.” True, I suppose, although that seems to have gone the way of EPA regulations. What remains is Sinatra’s extraordinary voice and his impeccable phrasing and musicianship. Hamill quotes Miles Davis’s assessment of the Sinatra-Riddle collaboration. “A lot of musicians and writers don’t get the full value out of a tune,” Davis said. “[Art] Tatum does and Frank Sinatra always does. Listen to the way Nelson Riddle writes for Sinatra, the way he gives him enough room and doesn’t clutter it up.”

If, for whatever reason, you don’t cotton to Sinatra, Hamill just might convert you.

I’ll end with two books that explore a different revelation. Generous in tone and respectful of objections raised by skeptics, the British philosopher John Cottingham is the best sort of Catholic apologist. In Why Believe? (Bloomsbury, $18.95, 208 pp.), he argues that a belief in God is a rational response if you reject moral relativism and concede the objective nature of goodness and virtue. In How to Believe (Bloomsbury, $30, 176 pp.), he reminds us that you cannot think your way into belief; you must live your way into a new way of thinking. If you do that, aspects of reality once hidden will become evident. A sports analogy might help. Until you get good at playing a sport, you really can’t enjoy it. Nor, at another level, can you know the beauty or the truth of it.

Paul Baumann is the editor of Commonweal.