An Art of Life 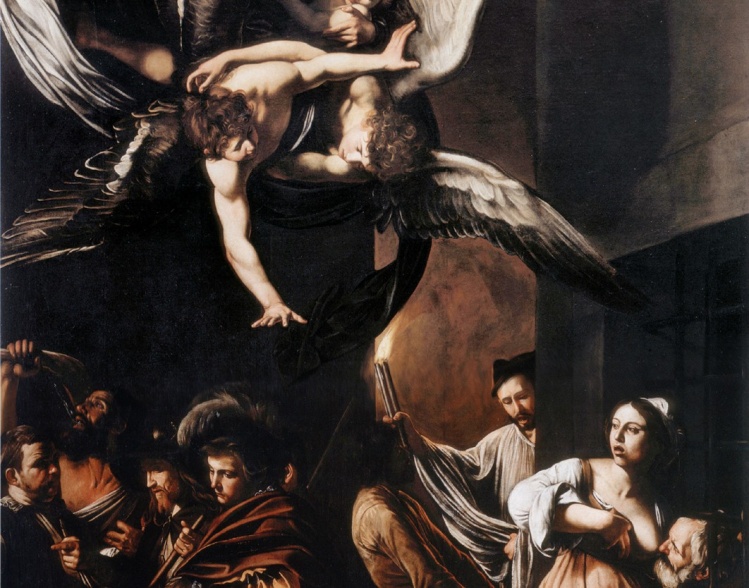 Readers in search of some year-round Christmas spirit will find it in Terence Ward’s The Guardian of Mercy: How an Extraordinary Painting Changed an Ordinary Life Today (Arcade Publishing, $24.99, 200 pp.). The extraordinary painting is Michelangelo Merisi da Caravaggio’s Seven Works of Mercy, painted in Naples in 1607 for seven young noblemen who had founded a religious organization in 1603, committed to relieving the plight of the poor. They called their sodality the Pio Monte della Misericordia, the “Pious Hoard of Mercy,” and as we learn from The Guardian of Mercy, it still exists today, staffed by descendants of the original founders.

For their newly constructed chapel in the heart of the city, they wanted a series of inspirational paintings, one for each of the Seven Acts of Mercy named by Jesus in the Gospel of Matthew (25:35–36): “For I was hungry and you gave me food, I was thirsty and you gave me drink, a stranger and you welcomed me, naked and you clothed me, ill and you cared for me, in prison and you visited me.” Caravaggio’s arrival in Naples furnished these remarkable young men with the perfect opportunity to hire the most exciting young artist in Italy to present their mission to the public eye.

Caravaggio may have been the most famous painter of his era, but he was also a condemned criminal, fleeing a murder charge in Rome, where he had skewered a local gang leader, Ranuccio Tomassoni, on a tennis court. In Naples, he found shelter and safety. His tortured life was marked by great kindness as well as great tragedy, and his paintings show it.

With consummate skill, the artist managed to combine all seven works of mercy in a single painting (and even added an eighth, burying the dead) showing these compassionate acts as they play out on a crowded, narrow street in seventeenth-century Naples, where beautifully dressed aristocrats rub shoulders with wretched, half-naked beggars—the same streets where the members of the Pio Monte carried out their work.  When Ward describes Caravaggio’s paintings, it is always with an eye to the similarities between Caravaggio’s Naples and the modern city, beautiful and profoundly troubled.

The “ordinary life” of the book’s subtitle is that of a Neapolitan named Angelo Esposito, a city employee who was moved in the 1990s from a bureaucratic office in the Department of Sanitation to the Baroque dome of the Pio Monte. Angelo was one of many people enlisted by the new mayor, Antonio Bassolino, to protect the city’s marvelous but vulnerable works of art and architecture. Bassolino’s “Neapolitan Renaissance” lasted only a few years, but some of its effects are still noticeable, including the transformations that a painting by Caravaggio brought to the humble man who was suddenly charged with standing before that painting all day every day. Angelo responded instinctively to Caravaggio’s starkly realistic scenes, so evidently set in the same streets where he worked. He began to read more and more about the painting and its maker. Ranuccio Tomassoni, the man Caravaggio murdered, was no different from the Camorra gangsters who plague contemporary Naples, and the works of compassion the artist shows in his great painting are essentially the same works carried out by the Pio Monte today. Hence when Terence Ward, his wife Idanna Pucci, and a Neapolitan friend wandered into the church one sultry morning, Angelo was ready to talk knowledgeably to the friendly visitors, and eventually to forge a genuine friendship with the Wards. A crisis in Angelo’s personal life brings all the threads of Ward’s story together, with Caravaggio and Idanna working in unlikely partnership to carry out their own work of mercy by helping a friend in need.

Rainer Maria Rilke’s poem on a Greek statue, “Archaic Torso of Apollo,” ends with the line “Du mußt dein Leben ändern”—“You must change your life.” Sometimes art asks nothing less, but what a gift that change can prove to be.

The project sounds impossibly banal, or impossibly bombastic, but in fact it reminds us that all our lives, long, short, great, or tiny, contain endless volumes of experience.
sharetweet

The Norwegian writer Karl Ove Knausgård inspires fierce reactions, both positive and negative. He is best known for his six-volume autobiography, My Struggle, thousands of pages devoted to the first forty years of his life. The project sounds impossibly banal, or impossibly bombastic, but in fact it reminds us that all our lives, long, short, great, or tiny, contain endless volumes of experience. This writer simply has the capacity to remember the sights, smells, and textures of individual moments in kaleidoscopic, and sometimes ruthless, detail. (Some of the people he has written about are none too happy with being so commemorated.) The phenomenal sharpness of Knausgård’s memory also brings back, together with his own reminiscences, the long-ago sensations we ourselves may have buried, overwritten, or tucked away. The pangs of adolescence still seem to stab him with the same intensity, and for many readers his observations will make them reach back into their own trove of stored perceptions and find treasure.

The first Knausgård novel to be translated into English was A Time for Everything (Archipelago, $20, 499 pp.), a three-part story with no apparent connection among its three sections except, perhaps, the author’s genius for description and his intense engagement with nature—no apparent connection, but connections can be made all the same.

The first section, set in the seventeenth century, follows an adolescent boy into the forest, where he vandalizes an anthill in what feels like a parable of primordial evil, humankind making a wreck of nature just because it can. The book’s long midsection retells the story of Genesis in a Holy Land that resembles a Norwegian forest rather than parched Mediterranean limestone, but then the seventeenth-century Swedish scholar Olof Rudbeck (1630–1702) famously asserted that Sweden had been the Holy Land, as well as Plato’s lost Atlantis. Knausgård sets Adam and Eve in a terrain that Rudbeck would have recognized, provides a harrowing description of Cain murdering Abel, and moves on to describe Noah and the Flood from the neighbors’ point of view. With the Earth’s sea levels destined to rise inexorably thanks to our meddling with the atmosphere (shades of that young boy uprooting the anthill at the beginning of the book), Knausgård’s description of endless rain and rising waters provides a chilling, and unforgettable, preview of our own potential future.

The final segment follows the self-destructive binges of a contemporary schoolteacher who has run away to the barren coast after seducing one of his own students, a teenaged girl, evoking the same overarching (and eternal) themes of guilt, innocence, nature, and human beings’ capacity to make a wreck of beauties beyond their grasp.

The gentle side of Knausgård’s acute sensitivity dominates Autumn (Penguin, $27, 240 pp.), the first in a series of four volumes about the seasons dedicated to his then-unborn fourth child. Each day, the father-to-be writes a short vignette for the baby, describing some aspect of the world it will be entering. “If you are a boy,” he promises, “your name, we suggested, will be Eirik. Then your name will have the same sound in it as the names of all your three siblings—y—for if you say them out loud, they all have it—Vanja (Vanya), Heidi (Heydi), John (Yonn).” But instead she turned out to be Anne: “I had suggested Anne, if you turn out to be a girl, and now Linda [Knausgård’s wife Linda Boström] said she really liked the name, there is something light and sunny about it, and that is a quality we want to be associated with you.” The book may be written with Anne in mind, but it really is for grownups, and comes with evocative illustrations by Oslo artist Vanessa Baird. It’s what I’m reading now.