What Does it Mean to Be Prolife in the Age of Trump?
By Jake Meador
Abortion
U.S. Catholicism
Donald Trump 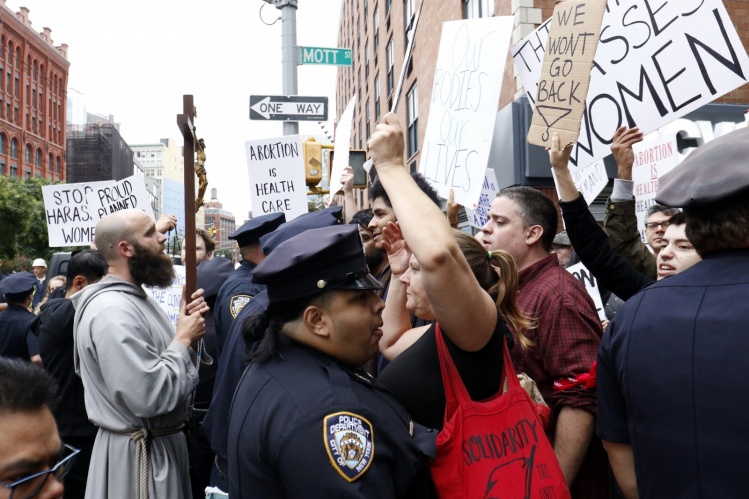 Brother Kolbe Blashock is confronted by supporters of legal abortion outside the Basilica of St. Patrick's Old Cathedral in New York (CNS photo/Gregory A. Shemitz)

Near the end of Sarah C. Williams’s book Perfectly Human, the Oxford historian recounts a jarring scene in her hospital room as she prepared to give birth to her daughter Cerian. Due to a condition called skeletal dysplasia, Cerian could not survive outside the womb and so her birth would also mean her death.

The doctor attending Williams was named Stella. Williams describes her as curt and direct. The reader infers that Stella’s bedside manner was somewhat lacking. By the end of Stella’s shift, Cerian had been born and Stella had witnessed the bright sadness of Cerian’s family, who grieved her loss deeply while also attempting to find comfort and hope in the promise of the Gospel: that death does not have the last word. The experience chastened this doctor. Before Williams left her delivery room to move to recovery, Stella came to visit her. She said, “it’s very sad what happened.” Then she began to cry. “You’re a brave lady,” she said, and, as Williams writes, “fled the room sobbing.”

What is most striking about this story is not so much the doctor’s reaction, unexpected as it is. What is most striking—what struck the doctor—is the decision Williams and her husband made to carry the baby to term, knowing she would not survive outside the womb. The Williamses understood that even in utero Cerian was a person, beloved of God. This fact compelled them to respond in a particular way.

We are often told that the abortion debate is about choice, and so those who describe themselves as prolife are really “anti-choice.” But in a 2010 paper, Kimala Price, a Women’s Studies professor at San Diego University, stressed that framing the issue in terms of “a woman’s right to choose” oversimplifies it. To understand the debate as one about whether a woman has the legal right to an abortion fails to address the problem that many women are, for various reasons, not able to use that right. For them, a more expansive form of advocacy is required. Price refers to this new fight as the struggle to secure “reproductive justice” for all women. In this understanding, the true fight for women’s rights is not only about keeping abortion legal; it’s about making sure that all women have the equal ability to abort, or to bear a child, and to raise her. Nothing outside a woman’s will should hinder her freedom with respect to any of these three choices, all of which can be threatened or constrained in various ways by oppressive dominant groups. A true movement to address the abortion issue must, in Price’s view, address all three of these reproductive choices.

To the extent that Price’s argument for a broader focus recognizes some of the many ways in which our society and its economy are not friendly to babies and their mothers, it is a welcome development with important political implications. Reproductive-justice advocates and pro-life activists should be able to work together on reforms such as paid family leave and tax credits for children. Still, there is something deeply inadequate, even alarming, about Price’s approach. It still reduces the issue of abortion to a question of coercion. The choice to abort is no worse than the choice to give birth as long as a woman gets to make it autonomously, unhindered by either legal restrictions or material impediments.

To understand the problem here we must return to Cerian. The fact of Cerian Williams’s existence creates a problem for Price’s treatment of coercion and freedom in the abortion debate. For Price, the only sort of limitation on personal autonomy is essentially violent—a matter of one person or group violating the liberty of another person or group. But Williams’s example suggests that our autonomy is sometimes limited by circumstances beyond anyone’s control. And these circumstances, even when they are tragic, invite us to reject violence, even when violence appears to be the easier and safer choice.

If her parents had viewed Cerian as nothing more than a hindrance to her mother’s autonomy or a lesser sort of life because of her disability, then abortion would seem like the logical choice. But if you view Cerian as a fully human child, despite her disability, and believe that the natural law requires parents to love their children, then Paul and Sarah experienced the freedom of acting according to the given order of things, even though acting thus was painful and difficult. And in the midst of that action, they learned new things about the nature of love and what it means to be human.

We ourselves are part of the natural world. When we act so as to diminish it, we diminish ourselves.
sharetweet

In one of his essays, Wendell Berry says of certain industrialists that they have “thought up the wrong world.” He means they have thought up a world that exists only in their minds, and have prescribed for themselves a course of action fitting such a world. The problem is the world in their heads does not correspond to the world given to us at birth. The older moral tradition that seeks to reckon with the world as it is given to us and not simply as we will it to be is certainly not a friend to the oppressive classes that Price rightly condemns in her demand for reproductive justice. Indeed, it was St. Augustine who said princes without justice are merely pirates by another name. But what the older tradition sees is that there is a givenness to the world which is not activated by human choice and yet does oblige human beings to act in certain ways. When we act in ways that agree with this natural order, we find that our possibilities are not diminished but expanded—sometimes quantitatively but always qualitatively. When we act with the grain of the world, we act with our own grain.

There are small ways in which most people can relate to this. It is not strange, ultimately, to think that certain things we encounter in the world ought to elicit a certain response from us. Indeed, the most effective forms of advocacy on issues of climate change depend on precisely this sort of logic: See that forest? It is good. Respect it. Protect it. Care for it. See that endangered animal? It is good. Do not destroy its home. The idea that nature calls us toward particular responses seems odd to many moderns right up until it doesn’t.

But it isn’t just that nature calls us toward certain responses and away from others. We ourselves are part of the natural world. When we act so as to diminish it, we diminish ourselves. When we act in its favor, we act in our own favor too.

The Anglican ethicist Oliver O’Donovan is helpful in understanding how this works. The modern view of freedom, O’Donovan says, is that freedom is chiefly a circumstance and specifically the circumstance of standing before an array of choices and being able to select one without any outside coercion. Thus the necessary and sufficient conditions of freedom are a multiplicity of choices and the absence of any outside influences to determine the agent’s choice. There are options laid before you and you are now free to select one.

O’Donovan contrasts this view of freedom to an older one which recognized that, while possibility was a necessary condition for freedom, possibility alone does not make a person free. In this older view, a person is free after, not before, they make their choice, but only if it is a good choice, leading toward our proper end.

But we should not think of the good choice as being a simple one-lane road where there are no additional possibilities. The truth is more complex and, happily, more interesting. We choose in one moment to love God and conform ourselves to his world and we find that this choice expands our possibilities.

Trump’s personal example contradicts the logic of the prolife argument itself.
sharetweet

The violence of abortion is of a piece with other kinds of violence in what Pope Francis calls our “throwaway culture.” Our society violently desecrates nature every day. Mountains are blown away and rivers poisoned in order to provide cheap energy. Workers are exploited and fired for taking a bathroom break. If there is a criticism I would make of the prolife movement—and I am hesitant to criticize anyone who champions so worthy and desperate a cause—it would be that it has been insufficiently radical in its reasoning. The choice of abortion is the most extreme, most horrific version of a choice that actually confronts us almost daily: Will you do violence to life, to the world as God made it to be, in order to enrich yourself? To make yourself comfortable? To serve a business, a nation? To spare yourself a difficulty, or even just an inconvenience? We are offered this devil’s bargain routinely. And it is to the prolife movement’s great credit that they reject the bargain when it comes to the life of the unborn.

Yet in failing to reckon with the full radicalism of this choice, they sell themselves and their movement short. This is abundantly clear in the prolife movement’s mass capitulation to Donald Trump, a capitulation based entirely on the wager that a Trump victory would secure the Supreme Court for a generation and lead to long-promised reversal of Roe v. Wade. In endorsing a man like Trump in the hope of advancing their agenda, the leaders of the prolife movement missed an opportunity to testify to the broader horizons of thought and action that should define them. They also damaged their own credibility by associating their cause with someone who has shown, in both his words and his actions, contempt for the weak and the vulnerable. Trump’s personal example contradicts the logic of the prolife argument itself. In any case, our moral calculus should not terminate on pure power politics. Prolifers are supposed to believe that the right choice is not always the apparently expedient one. This is also true of politics if it is true at all.

Nothing—neither moral purity nor brazen opportunism—can guarantee the prolife movement’s success. Movements in defense of those who can’t defend themselves face countless obstacles. We remember the ones that somehow prevailed against the odds, not the others that fell short of their aims. What is clear, as Pope Francis reminds us, is that we cannot hope to persuade anyone that the disposability of the unborn matters to us in the way we say it does if we seem resigned to all the other ways in which our society treats human beings and the world they share as disposable.

Jake Meador is the author of In Search of the Common Good: Christian Fidelity in a Fractured World (2019, IVP). He is the editor-in-chief of the online publication Mere Orthodoxy and lives in Lincoln, Nebraska, with his wife and three children. 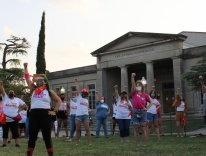