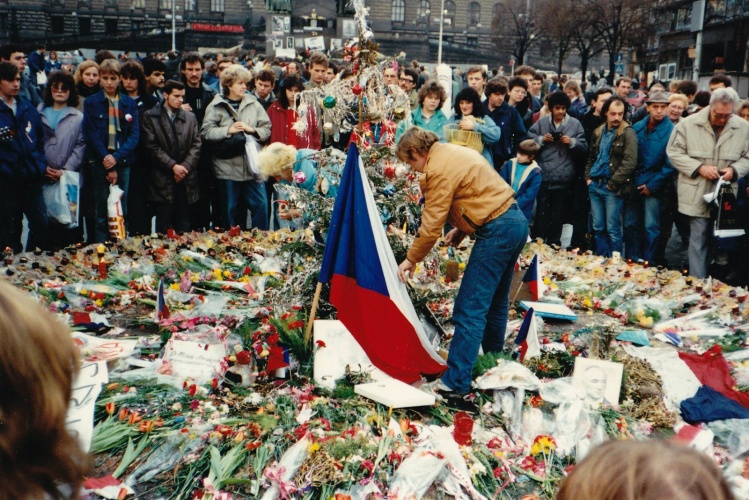 Vaclav Havel and protesters commemorate the struggle for Freedom and Democracy at Prague memorial during 1989 Velvet Revolution. (Irmojohnny / Wikimedia Commons)

November 26 is the thirtieth anniversary of the Velvet Revolution, the peaceful demise of Soviet control over Czechoslovakia. A hundred thousand Czechs and Slovaks gathered in Prague’s Wenceslas Square jangling their keys to celebrate the fall of the Communist government and the promise of a new life. On that remarkable day, Václav Havel and Alexander Dubček, among others, stood on the balcony overlooking the square. Two decades earlier, on April 4, 1968, I was in Prague, traveling with a group of French Catholic students on an Easter trip to Central Europe. Dubček had just been installed at the head of a new government that was trying to shake off the Soviets. The weather, as I recall, was damp and gray, but the Prague Spring mood was ebullient.

That was one of the unforgettable days I associate with the Velvet Revolution. Another was the following August 20. I was traveling on an overnight train from Germany to Paris with my husband and daughter, whose third birthday we had just celebrated, when we got word that Warsaw Pact troops had invaded Czechoslovakia to quash Dubček’s reforms. When we reached Paris, no amount of sleep deprivation could tear us away from the radio and reports of Czech resistance. The invasion was of course followed by the persecution, arrest, and imprisonment of Czechoslovak dissenters, the young Havel among them.

My colleagues at Commonweal used to tease me about my enthusiasm for Havel’s writing. During the 1970s and ’80s, Commonweal was more attuned to dissidents in Poland—Lech Wałęsa, Adam Michnik, and, of course, the new Polish pope. Easy choice: a Czech playwright hardly matched the drama of a rebellion wrapped in a Catholic cloak. What’s more, the friendship between Commonweal and Tygodnik Powszechny, its lay Catholic counterpart in Kraków, had grown over the years with sporadic visits of its editors to the United States. Events in Poland were closely followed by my colleagues.

Czechoslovakia was another story, culturally and religiously. So was Václav Havel, whose plays and essays were addressed to a more secular society steeped in the humanism of Tomáš Masaryk and the rebelliousness (as I liked to imagine) of Jan Hus, the fifteenth-century heretic. My enthusiasm included reading, and frequently quoting from, Havel’s writings: Letters to Olga, “The Power of the Powerless,” “Politics and Conscience,” “The Anatomy of a Reticence,” along with dissenting statements, public appeals, and pithy slogans. New York’s Public Theater translated and mounted several of his plays, a few of which I saw. When British supporters of repressed Czech and Slovak dissidents wished to drum up similar support in the United States, our Manhattan living room became the site of a small group of organizers, including the Canadian philosopher Charles Taylor.

Rereading Havel now, I hear the echo of a beleaguered people.
sharetweet

In 1989, when the beleaguered Czechs finally brought down the Communist government, they were emancipating themselves from “living a lie.” That is how Havel characterized the corruption of language, thought, and morals that this “post-totalitarian system” required. The system “mount[ed] a total assault on humans, [who] stand against it alone, abandoned and isolated.” Thus, dissent and dissident movements, he wrote, “are naturally” and “explicitly defensive movements, [which] exist to defend human beings and the aims of life against the aims of the system.” He offered the example of a greengrocer who every day hangs up a sign in his window: “Workers of the World Unite.” The greengrocer “never thinks about the slogans…nor do they…express his real opinions.” This “automatism” and the demands of the system are shattered the day the greengrocer decides not to hang up the sign, nor to vote, nor to attend meetings required by the “system.” With that, he becomes a dissident: “his revolt is an attempt to live within the truth”—Havel’s resonant contrast to “living a lie.”

Thirty years later, all of this is history. The Czech Republic and its neighbors in Central and Eastern Europe have become “normal” countries, members of the European Union. Most are democracies operating at half-tilt under the control of oligarchs who grabbed up what was left of their country’s failed socialist economies. Even reunited Germany, democratic and economically flourishing, bears the scars and resentments of citizens who remain in what used to be East Germany. Things have not turned out as everyone, myself included, hoped and expected. We were again in Prague in June of 1990 when the newly reborn nation conducted its first free election since before World War II. We listened to the combined orchestras of Bohemia, Moravia, and Slovakia play Smetana’s symphonic suite Má vlast (“My Homeland”) in the afternoon and heard Paul Simon singing “Bridge Over Troubled Water” at that evening’s youth concert. The exhilaration I remember so well is now tinged with melancholy.

My colleagues may have been right to mock (gently, of course) my enthusiasm for Havel’s readable metaphysics and absorbing moral inquiry. His down-to-earth examples and fine-tuned reflections on how to think about, and to live honorably within and beyond, the ideological strictures of Soviet control inspired the Velvet Revolution, and many readers elsewhere. Yet those fine words and stirring phrases did not lay out a map for the future. Havel was elected president in June 1990 and served for thirteen years. He was far more popular in the West than in the Czech Republic. His puckish take on life did not mesh with normal politics, and he never gave up being a dissident, even within his own government.

Rereading Havel now, I hear the echo of a beleaguered people. It may be a stretch, but I can’t help wondering whether we are the ones now caught up in “living a lie”? It isn’t only the abuse of constitutional norms, erratic policymaking, demeaning personal attacks, and vanity. It is the fog of nonsense that enmeshes all of us—conservatives, liberals, progressives, right-wingers, Trumpers and never-Trumpers. It is the moral miasma caused by the antics of a crazed president and a media fixated on his every word and gesture.

Who will be our greengrocers? When will those who have so far silently tolerated this preposterousness—Republican officials and notables, corporate leaders, former White House enablers, “acting” heads of agencies, Wall Street Journal editorialists, donors, heartland fence-sitters—suddenly decide to say “Enough!” and stop living a lie?