What Comes Next?
By Ed Simon
Ecumenism
U.S. Catholicism 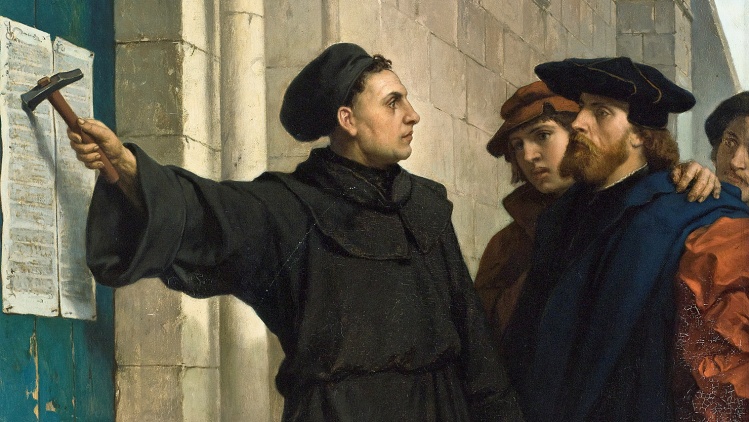 October 31 marks the quincentenary of a certain Augustinian monk nailing his ninety-five theses to a church door in Wittenberg, Germany—a perfect moment to consider having a repeat. Pundits often claim that Islam needs its own Reformation. But maybe all of us—Christian and non-Christian, believer and non-believer—would benefit from a New Reformation, one that changes our sense of what the word “religion” means. Present conditions indicate that we might be on the verge of another Reformation anyhow.

In some ways, Martin Luther’s world was not so different from ours. In 1517, old certainties were failing, and politics was in turmoil. New discoveries transformed understanding, and poisonous nationalisms emerged. Media technology altered how people received information. And most crucially, a crisis of faith marked his world. We suffer from a similar malady, one that, ironically, was in part precipitated by that brave monk himself.

Depending on whom you ask, Luther is either to thank for liberal modernity, or to blame for the doctrinaire, literalist form much of Christianity now takes. Scholars debate the details of the Reformation, concerning both timeline and implications, but maybe it’s still too early to know what Luther’s full influence will be. In any case, the romance remains half a millennium later, the image of the man who bravely declared, “Here I stand; I can do no other.”

Depending on whom you ask, Luther is either to thank for liberal modernity, or to blame for the doctrinaire, literalist form much of Christianity now takes.
sharetweet

Despite Luther’s popular image, since the early twentieth century there has been the creeping suspicion among some thinkers that he helped set in motion the disenchantment of the West. Terry Eagleton claims that “the Protestant self moves fearfully in a darkened world of random forces, haunted by a hidden God.” Eagleton argues that the Reformation altered the relationship of the sacred and the profane. We’re all Protestants now, in the sense that we adhere, mostly unconsciously, to the parameters that marked out Luther’s understanding of religion. His emphasis on religion as defined through faith alone made creeds, confessions, and denominations more significant than they should be. A New Reformation could reinvigorate practice, ritual, and culture over mere propositional belief, and in the process allow for a more expansive definition of religion.

Luther’s call for “Scripture alone” ultimately privileged literalist reading, which led to fundamentalism. Literalism isn’t the relic of a barbaric medieval past but the consummate product of modernity. Literary scholar James Simpson describes the method of reading advocated by the early Protestants as “immensely demanding and punishing...marked by literalist impersonality.” Medieval thinkers were at home with allegory, but that way of reading is now minimized, and instead an idol is made out of “original intent,” whether in the Bible or elsewhere.

Finally, with his insistence on the interior disposition of the individual soul and its unmediated relation to God, Luther inadvertently weakened the connection between meaning and the world. Philosophers Hubert Dreyfus and Sean Dorrance Kelly explain that “Reform Christianity had the effect of emphasizing the individual as defined by his inner thoughts and desires at the expense of…worldly meanings outside the individual,” with the result that Luther accidentally “prepared the way for the active nihilism associated with the death of God.”

For all that was valuable about Luther’s rebellion—and even most Catholics would now admit that he had good reasons for his dissatisfaction with Rome—let’s also acknowledge that the Reformation introduced ways of thinking about faith that make it narrower and more rigid than it should be. I am not arguing that we must return to primitive Christianity, as Luther claimed he had. Nor am I arguing for a return to some faux-medieval tableaux of relics, pilgrimages, and liturgical celebrations. The bare ruined choirs will remain empty. There is no going back; there is no undoing or escaping modernity.

And yet, as a growing crisis of meaning seems ever more apparent, it’s fair to ask what can possibly come next? The literary historian Andrew Delbanco says that in contemporary society “the ache for meaning goes unrelieved” and an “unslaked craving for transcendence” seems almost universal. Where there are aches, there are eventually analgesics; where there is craving, there must eventually be sustenance. The issue, then, isn’t whether there should be a New Reformation, but rather what kind of Reformation it will be. Will it be a retreat to the pleasures of certainty, a doubling-down on literalism? Or will it offer new possibilities for sacred meaning, and even perhaps reenchantment? Could it challenge the idols of our age, including the Market? The truth is I don’t know. I have no theses to nail to any church doors. But that a shift in religious consciousness is necessary to address the maladies that confront us, from ecological collapse to authoritarianism, I heartily affirm—for I can do no other.

Ed Simon is a senior editor at the Marginalia Review of Books, and a frequent contributor at several websites. His collection America and Other Fictions: On Radical Faith and Post-Religion will be released by Zero Books in 2018.