It’s time to close this shameful chapter of our history.
By The Editors
War and Peace
Domestic Affairs 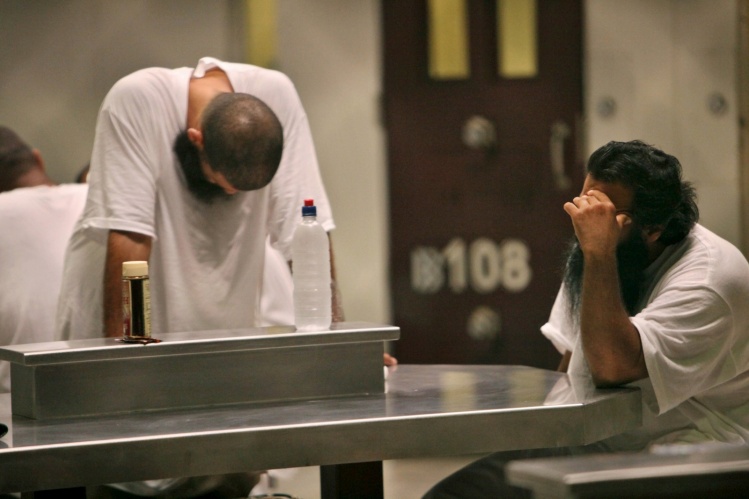 Nearly eight hundred people have passed through the Guantánamo Bay prison camp since the United States opened it in January 2002. Twenty years after 9/11 and more than a month after the withdrawal of American forces from Afghanistan, thirty-nine detainees are still there. In all that time only twelve have been charged with war crimes, and ten of those are still awaiting trial. The others are held in what’s known as indefinite law-of-war detention: they have been imprisoned, in some cases for decades, without being charged with anything, and even the handful approved for release to other countries continue to languish without a date set for their transfer. The glaring injustice of the situation at Guantánamo Bay presented Russian President Vladimir Putin with the opportunity to criticize the United States on human rights after his meeting with President Joe Biden in June: “Guantánamo is still open. This is contrary to all imaginable rules, to international law or American laws, but it is still functioning.”

President George W. Bush declared in 2002 that Guantánamo would house “the worst of the worst,” but in fact it has also housed the innocent and thus become a lasting symbol of America at its worst. Of the hundreds sent there in the early days of the war on terror, many were held on flimsy evidence or none at all. Some were tortured, before and after their arrival, and some offered false confessions under duress. The Bush administration rushed to formulate novel legal reasons for suspending due process, reclassifying the detained as enemy combatants to be tried not in U.S. civilian courts but at Guantánamo before hastily established “military commissions.” Though the Supreme Court invalidated some of these measures, and the use of torture was eventually discontinued, the Obama administration eased off its original promise to end unlimited detention. For its part, Congress has passed several measures preventing Guantánamo prisoners from being transferred to the United States for trial. Lawmakers worry that the American judicial system, with its emphasis on due process, might be too fair to guarantee conviction, and that open testimony would reveal embarrassing information about coerced confessions, tainted evidence, and the inhumane conditions under which detainees have been held.

The more time that passes, the greater the likelihood that detainees will grow old and die at Guantánamo.
sharetweet

That helps explain the status of the five men held on charges of plotting the 9/11 attacks, including alleged mastermind Khalid Sheikh Mohammed, who have been in custody for more than eighteen years. They were arraigned in 2012, and since then there have been forty-two pretrial hearings to sort through the legal complications arising from the ad hoc military commissions, and from the fact that the accused face the death penalty. There has also been a revolving door of presiding military judges, the latest of whom was appointed in August but needs time to become familiar with filings and court records reaching back years. Pandemic-related restrictions have added further delays, keeping attorneys from traveling to Guantánamo (defendants are not allowed to communicate with their lawyers by video or phone). Jury selection still has not begun, which means a trial is at least a year away, and there is no telling when a verdict might be reached. It’s reasonable to think that trying the defendants in civilian courts in the United States—as the Obama administration sought to do in 2009—could have expedited matters. In his recent book, Reign of Terror: How the 9/11 Era Destabilized America and Produced Trump, Spencer Ackerman makes a useful comparison to the case of Oklahoma City bomber Timothy McVeigh. McVeigh was indicted, tried, and convicted in less than two years, bringing not only swift justice but also closure for families of the victims.

Meanwhile, Guantánamo detainees are aging, their physical health declining even as the psychological trauma associated with indefinite detention and isolation grows worse. (Since Guantánamo opened, seven detainees have died by suicide.) Indeed, the more time that passes, the greater the likelihood that detainees will grow old and die at Guantánamo, something the Pentagon has acknowledged by its plans to retrofit the facility as a nursing home, envisioning its continued use through 2043.

By then Guantánamo will have been operating for over forty years. It’s as unimaginable as it is unconscionable, but no more so than the fact that it was ever allowed to open in the first place. The Biden administration has announced an interagency review aimed at closing Guantánamo by 2025, but specific measures should be taken now to set release dates for those who have not been charged with anything, and to get moving on fair trials for the accused. A group of senators has urged Biden to re-establish the Special Envoy for the Closure of Guantánamo and to restore related State Department positions eliminated by Donald Trump, which could help speed repatriation efforts that he brought to a halt as president. There are also legal mechanisms for securing plea agreements from detainees against whom there is sufficient untainted evidence, and for sentencing those convicted of non-capital crimes to imprisonment in their home countries.

With the war in Afghanistan over, it is time for the United States to admit fully the grievous mistakes it made in opening and operating Guantánamo, and to apologize for what has been allowed to occur there. Of course, this will not erase Guantánamo’s shameful legacy. But it might make us think twice before making the same mistakes again.