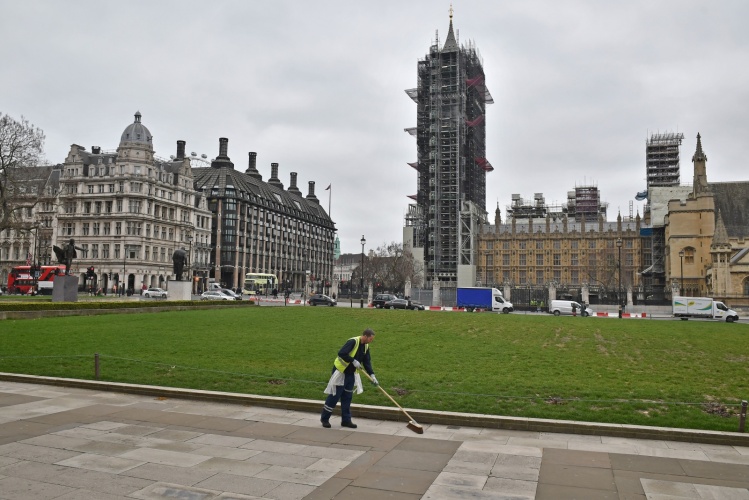 A worker sweeps in an empty Parliament Square in London March 18, 2020, amid the coronavirus pandemic (CNS photo/Dominic Lipinski).

In mid-March, before the University of Cambridge shut its doors, I stockpiled four boxes of library books in preparation for indefinite confinement. I have since spent my time in quarantine like many, though not all, people can: reading, writing, watching movies. I leave my house once a day—with the government’s permission—for exercise. There are weekly trips to the local Sainsbury’s grocery store: hundred-meter queues outside, people masked and separated six feet from one another. The pubs are boarded up, and the town square is silent. Cambridge is a tranquil town, so watching it come to a standstill hasn’t produced the shock of seeing, say, New York closed down tight.

I’ve been paying more attention to the spring blossoms, now coming up in patches. Everything seems to beg for its beauty to be recognized. I’ve witnessed humanity at its best, in the form of small acts of kindness. Notes slipped under my door from faceless neighbors, offering groceries and help, no questions asked. Brownies and banana bread exchanged by friends bonding in isolation. Before leaving Cambridge, another friend gave me a plant, hypoestes phyllostachya, green leaves with light pink spots, to keep me company when the lockdown began.

Of course, living in quarantine in a different country has its challenges. I weighed the decision of whether to return to the United States. If I flew back, I could enjoy the comfort of my family in sunny California, instead of being alone in an attic room looking out on gloomy British skies. But if I stayed, I wouldn’t risk picking up the virus on the fifteen-hour journey and potentially transmitting it to others. And if I stayed and got sick, I’d still have free health care.

Governments and health systems around the world have been overwhelmed by coronavirus, but at least the United Kingdom’s National Health Service (NHS) offers equal access to testing and treatment for all, free of charge. In the early days of the pandemic, friends in the United States had told me about the astronomical costs of testing; it was something that factored into my decision to stay here. Now, though tests in the United States have been made free, they’re exceedingly difficult to come by, a critical shortage that thanks to the Trump administration’s ineptitude is likely to persist. And though some U.S. insurers have pledged to cover the costs of treatment, others are only waiving deductibles or paying a portion of out-of-pocket expenses. In other words, the usual patchwork of care and costs that characterizes the dysfunctional American system, whether or not there’s a pandemic.

If there is something the United Kingdom shares with the United States, it’s the initial and reckless reluctance to implement nationwide restrictions on travel and gathering. Prime Minister Boris Johnson’s first response to the pandemic was plainly misguided. “Many more families are going to lose loved ones before their time,” Johnson said in a March 12 address before refusing to close schools or ban large gatherings. This laissez-faire approach was intended to allow many people to contract the virus in order to build “herd immunity,” which would ultimately protect the economy from widespread business shutdown. But when figures showed it could result in hundreds of thousands of deaths, Johnson changed his tune. Within a week, people were urged to stay home. All pubs were ordered to close. On March 23, as footage spread of Britons flouting social-distance measures, Johnson ordered a police-enforced nationwide lockdown. It was too little, too late: as of this writing, more than 114,000 infections have been reported, and more than 15,000 deaths. Johnson himself ultimately tested positive for the virus after bragging that it wouldn’t stop him from shaking hands with coronavirus patients in the hospital; still suffering symptoms after two weeks, he was hospitalized on April 5 and placed in intensive care. He is now recovering at home.

To mitigate the economic impact on its citizens, the government plans to pay 80 percent of salaries for workers kept on by their employers, up to a maximum of £2,500 (about $3,100) per month, somewhat more generous than the one-time payout of $1,200 many Americans are set to receive. Measures have also been introduced to strengthen benefits for those who are unemployed, like increased tax credits and universal credit value, which is essentially a monthly allowance for people who are low-income or out of work. But many self-employed workers are likely to slip through the cracks, according to the Institute for Fiscal Studies, which estimates that around 2 million would not be covered because they don’t earn enough or had only become self-employed within the past year, missing a critical period to prove their past income. The Uber driver who brought me (and my books) from the library to my home, and had only recently begun working full-time, told me I was his first customer in his seven-hour shift. (“The government keeps telling me to work from home,” he said, “but what am I bloody supposed to do? Drive in circles around my living room?”) Another 2 million people who run their own companies and pay most of their income in dividends instead of salaries will not be covered, either.

Since getting serious about the coronavirus, the government has dramatically ramped up its testing initiatives, which the prime minister touted as “the way through” the pandemic. The United Kingdom plans to test one hundred thousand people per day by the end of April. Hundreds of thousands of tests have been deployed, with the focus on testing thousands of frontline NHS workers because of their increased risk. There has been a sudden show of support for the NHS from those who’ve long sought to dismantle the U.K’s government-funded social-service programs. This has been interesting to observe. A decade of Tory austerity policies have resulted in reduced NHS spending, and just a few short months ago voters overwhelmingly reelected a party intent on further cutting public health care. Since 2015, the Tory government has awarded £15 billion in contracts to private companies, outsourcing the health service’s functions while reducing service quality and raising costs. Further, cuts in funding to nurse-training programs have resulted in the highest-ever vacancy rate for nursing posts, with 43,000 positions unfilled. Nearly half of NHS trusts face a 10 percent shortage in nurse staffing, which is over three times more than five years prior. Even before the coronavirus crisis began, nurses were being replaced with untrained assistants.

Since March 26, every Thursday evening, British residents are encouraged to clap from their doorsteps and balconies in recognition of the work done by NHS employees. But while the “Clap for Carers” campaign celebrates the doctors and nurses working twenty-four-hour shifts and those providing home care, it seems not to take into account the other people keeping the hospitals open—like cleaning staff, who in the United Kingdom are largely the same immigrant laborers the Tory government has tended to denigrate. It’s not so long, after all, since the end of the Brexit campaign, whose chords of racism, xenophobia, and imperialist nostalgia still echo. Yet a third of all doctors in the NHS are immigrants—as were the first eight U.K. doctors to die from the disease. In early April, Home Secretary Priti Patel announced that work visas for all foreign-born NHS doctors, nurses, and paramedics would be extended for another year, “free of charge.” No such concession has been granted to the hospitals’ cleaning staff.

While the “Clap for Carers” campaign celebrates the doctors and nurses, it seems not to take into account the other people keeping the hospitals open
sharetweet

Populism and nationalism, climate change and the migrant and refugee tragedy, the election and presidency of Donald Trump: for years now it feels we’ve been living in one ongoing, all-encompassing crisis. So what makes the pandemic different? My initial reaction is that it’s the number of people who have died, and are still likely to. Yet how much of this is my own personal anxiety, the fear that I and people I know could fall victim? After all, millions of people already die completely preventable deaths every year. It’s estimated that as many as 25,000 people around the world perish each day from hunger-related diseases. Approximately 9.1 million people die of starvation annually. Yet one-third of all the food produced goes to waste. This is a problem, and it’s hard not to see how policies that prioritize capital over human life play a role. Fealty to neoliberal economic policies is also behind the cuts in health-care spending in countries like the United Kingdom and denial of universal health care to Americans. It’s on display in the rush to reopen businesses before the pandemic has receded, a move justified as needed to “save the economy” but one that would likely jeopardize tens of thousands more lives. Scientists had been warning of a pandemic for years, but in prioritizing short-term economic strength many countries (including the United Kingdom) paid no heed to calls to strengthen health care and other social and economic infrastructure.

While I read and write in the comfort of my room, workers at grocery stores and pharmacies, delivery drivers, and maintenance workers risk their health to provide the goods and services we need. The restaurants and pubs will reopen, people will go back to work, large gatherings will again convene. But snapshots of the levels of inequality during this “universal crisis” remind me of the state of precarity so many millions already live in, and will likely remain living in, after the pandemic ends.

I join my neighbors on our doorsteps to clap for NHS workers, while also gratefully remembering the many laborers now deemed “essential” who are contributing to my safety. And as the death toll rises in the United States, and I hear stories of my friends’ parents dying, I fear for the safety of my loved ones far away. I hope that the lessons we take from the pandemic won’t be lost when life returns to “normal.” I know how lucky I am at this moment. I pray that the crisis might result in better, more compassionate government policies. And on a very human level, I pray we remember that all are deserving of our empathy.