A mission to ‘end history’ as we’ve known it
By Piotr H. Kosicki
Russia
Ukraine
War and Peace 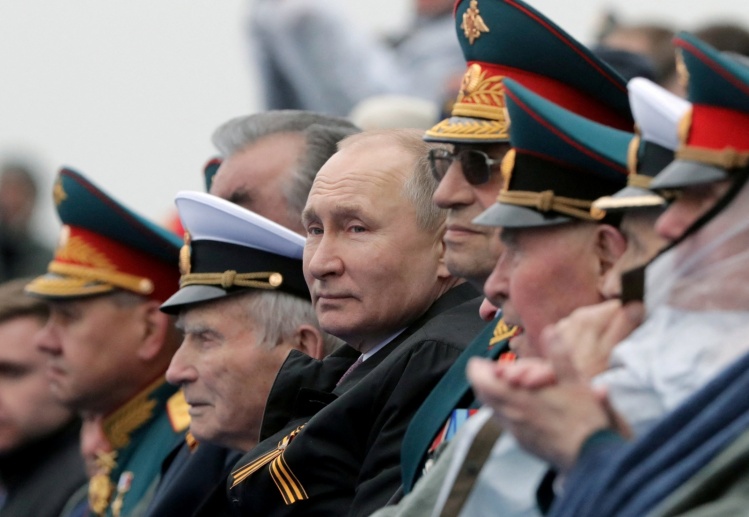 Chernobyl, the site of the most infamous civilian nuclear disaster in history, has been occupied by invading troops, disconnected from the power grid, and set on a path to a potentially massive radiation leak. What could possibly motivate this disastrous course of action by Russian combatants in Ukraine? If we ask why Vladimir Putin’s forces have shelled oil reservoirs in major urban centers, attacked humanitarian and refugee escape corridors, targeted maternity hospitals, and captured Europe’s largest operational nuclear power plant amidst heavy bombardment, the answer would be the same. Putin has shown himself to be a war criminal and a mass murderer, but that is not explanation enough for why he would intentionally pursue nuclear, ecological, and civilian damage. Putin is not crazy; in his own mind, he is both a realist and a bringer of apocalypse.

For this reason, it is a mistake to think of the Russian invasion of Ukraine purely as the launching point of a new Cold War. Of course, the war has been very hot from the beginning: witness the cluster bombs dropped on Ukraine’s second-largest city, Kharkiv; witness Germany’s moves to arm on a scale not seen since World War II. But the starting point of any conversation about the Russian invasion of 2022 is that its goals and rules are not at all those that guided the international order from 1945 to 1991.

The most important new rule is that apocalypse is now on the table as a serious option—and for Putin, it’s not a dirty word. During the Cold War, pundits and politicians occasionally borrowed the imagery of fire, brimstone, and the Antichrist from the Book of Revelation, but few seriously believed that the key to establishing effective nuclear deterrents lay in making sense of 666 and the seven seals. (To be reminded why, one need only re-watch Dr. Strangelove.)

This is one of many ways in which the world of 2022 is different from the world of 1962, when Kennedy bested Khrushchev to defuse the Cuban missile crisis. Khrushchev didn’t want to end the world; Putin just might. Ukrainian President Volodymyr Zelensky is right that the Russian shelling of Ukraine’s Zaporizhzhia nuclear power plant could have ended with “six Chernobyls”—and Putin would have embraced that outcome.

Scholars like Yale historian Timothy Snyder have been saying for years that Putin is a fascist leader of the global Right. In other words, like Adolf Hitler, Putin has a sense of world-historical mission. Indeed, Putin’s self-styled mission is to end history as we have come to know it since the end of the Cold War. Almost prophetically, Snyder called Putin’s a “politics of eternity.” The Russian president does not need to end biological life on earth in order to stop history because he believes that he holds cards strong enough to achieve a permanent “peaceful conflict settlement” on his own terms. That may not mean wiping the country of Ukraine off Europe’s map, but it does mean an end to Ukrainian sovereignty—and as firm a Russian grip on Ukraine as there now is on Belarus, where Putin was proud to see the democratic revolution of 2020–21 crushed with brutal efficiency.

For Putin, the European security architecture long and proudly touted by the West itself marked Russia’s apocalyptic defeat.
sharetweet

To understand what comes next, we have to consider carefully that word, “peaceful,” which Putin pronounced repeatedly even as he was announcing his plans for war in the now-infamous speech of February 24. Thinkers since Plato and St. Augustine have understood peace as but a fleeting dream, a pause between inevitable returns to a state of war, because conflict is intrinsic to the human condition. In the study of international relations this worldview is known as realism. It has a dark side, but during the Cold War it was realists who crafted the strategy known as mutually assured destruction. That strategy effectively kept the superpowers from annihilating each other and taking the world with them. This, in turn, made the post–Cold War order possible—Francis Fukuyama’s “end of history,” when the triumph of liberal democracy was supposed to foreclose future serious threats to peace. This vision of peace was itself an apocalypse—if we think not of the vivid battle scenes of the Book of Revelation, but instead of the kingdom of perpetual peace meant to follow the Last Judgment, bringing the Bible to a close.

From today’s standpoint, this kind of thinking seems little more than an artifact of a bygone era. Angela Merkel famously implied in 2014 that Putin had parted ways with reason—a sentiment echoed by many heads of state in recent months, as the invasion of Ukraine came to seem more and more likely. But in fact, Putin is both a realist and a self-styled bringer of apocalypse. For Putin, the European security architecture long and proudly touted by the West itself marked Russia’s apocalyptic defeat. Putin glorifies the Soviet Union’s World War II victories and remains ashamed of the USSR’s quiet implosion. Since coming to power, he has pursued a fairly consistent strategy of reasserting and rebuilding Russian strength in Chechnya and Georgia, and, via allied strongmen, in Belarus, Kazakhstan, and elsewhere across the post-Soviet space. This is what former U.S. ambassador to Russia Michael McFaul has called Putin’s “hot peace.”

After Putin’s puppet Viktor Yanukovych fled the Ukrainian presidency as a consequence of the Euromaidan revolution of 2013–14, Ukraine became destined in Putin’s mind to be his last stand—his Har Megiddo, the Holy Land hilltop where good would fight its final battle with evil. Not for nothing did the mayor of Mariupol refer on March 10 to his now-destroyed city, where Russia had just airbombed a maternity ward, as “Armageddon.”

Putin has found support for the affirmative pursuit of apocalypse in the Russian Orthodox Church, whose patriarch Kirill immediately came out in support of the invasion, and in a coterie of homegrown fascist thinkers. The most famous of these, Alexander Dugin, became the architect of Putin’s campaign to boost the global fascist far-right. Dugin pushes the Kremlin toward understanding apocalypse not just as Russia’s righteous triumph over Western liberal overreach, but as a literal end of time. He regularly invokes medieval prophets of the end-times, and these neo-medieval visions have undoubtedly had an impact on the Russian president. They color, for example, Putin’s understanding of World War II, genocide, and the Holocaust—helping to explain the unexplainable, including how Putin can claim a project of “de-Nazifying” a country led by the grandson of a Holocaust survivor, Volodymyr Zelensky. And how his forces can bomb one of Europe’s most significant Holocaust memorials, at the Babyn Yar site outside Kyiv, where almost 34,000 Jews were massacred over two days in 1941. Putin’s message is quintessentially anti-Semitic: that Jews were in league with Nazis, and that the real victims were Russian. Anyone offering a different story—including the entire political leadership of sovereign Ukraine—needs to be “de-Nazified.”

To put it bluntly: Does Putin want to kill us all? Not necessarily. As Stanford scholar Alison McQueen tells us, “Apocalypticism can just as easily prompt political withdrawal and resignation.” One needn’t be crazy to be an apocalyptic thinker. Nuclear saber-rattling in Moscow and Russian war crimes in Kherson have a tactical significance, on the off-chance that the West might back down and let Putin have his way as a result.

Given the impressive unity the West has shown, with military provisions as with sanctions, this seems unlikely. But the longer the conflict continues, the more frail that unity will become. Beijing will make its own moves, and energy prices across Europe will explode to levels untenable at a time when the European Union has just taken on a post-COVID recovery plan eight times the cost of the Marshall Plan.

Getting the world out of this crisis before that unity falters starts with the need to take Putin’s apocalypticism seriously, and to understand that it does not preclude serious calculations about power and strategy. Putin will not be satisfied as long as an independent, sovereign Ukraine exists to Russia’s southwest, unless cracks start appearing elsewhere in his apocalyptic arsenal—say, the stability of a loyal Belarus, or in Central Asia. These are important strategic points where the West still has room to crank up the pressure. To be clear: it is difficult to imagine this ending as long as Putin remains in power, and nuclear apocalypse remains very much on the table. But before anything else happens, Putin needs to be called out as an apocalyptic figure in a voice that the Russian people at large can hear—via the Telegram app, shortwave radio, as well as the important homegrown tradition of underground samizdat printing. Whether Putin is alive or dead, the Russians alone can provide a way out of his apocalypse.

Piotr H. Kosicki is associate professor of history at the University of Maryland and a visiting fellow at Stanford’s Hoover Institution. His latest book (with Kyrill Kunakhovich) is The Long 1989: Decades of Global Revolution (2019). 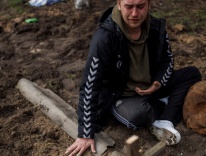