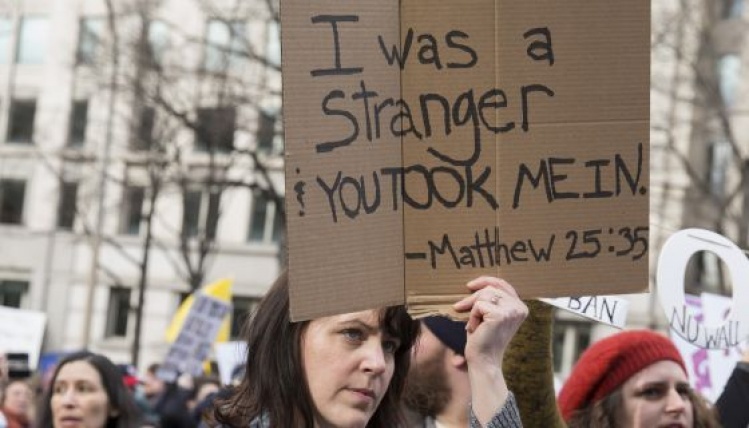 The National Prayer Breakfast in Washington, D.C., Thursday brings together a decidedly insider crowd of ministers, members of Congress, and well-coiffed lobbyists. There will be schmoozing and polite chatter over coffee. High-minded appeals to civility, common ground, and patriotic prayers for the country will be earnestly intoned. All of this, of course, has its place in normal times. But to say we no longer live in normal times is a bit like declaring that LeBron James is proficient at the fundamentals of basketball.

Donald Trump will address the gathering at the Washington Hilton. He seemed to rediscover his Christian faith on the campaign trail, and became the most powerful person in the world in large part because white evangelicals and white Catholics somehow justified voting for a man who makes a mockery of what Jesus called his followers to do. Religious apologists for Trump such as Rev. Franklin Graham and Jerry Falwell Jr. continue to disgrace themselves by making an idol of access to power. Just last week Archbishop Charles Chaput suggested Notre Dame honor Trump by inviting him to give its commencement address. Not all Christians have been as warm to the new president, however. More than eight hundred Christians wrote to President Trump before the event with an urgent reminder rooted in orthodox Christian witness:

The Hebrew prophets teach us that the powerful must constantly be reminded to protect the downtrodden, the widow, the migrant and the outcast. The Gospel is not about prosperity, but Good News for the poor. In them, we encounter Christ.... In the Lord’s Prayer, we pray for God’s will to be done on earth. Building this kingdom of justice and peace is our daily task. We pray that you use your office to unite, and turn away from your rhetoric and policy proposals that degrade human dignity. We pray that you remember refugees and immigrants have sacred worth in God’s eyes. We pray that you protect the gift of Creation—air, oceans, rivers, and climate that give and sustain life. We pray that you recognize affordable health care is a human right, not a privilege. We pray that you respect our Muslim brothers and sisters, who should never be targeted or stereotyped because of an extreme few who pervert a peaceful religion.

Prominent Catholic signers include Sister Donna Markham, president and chief executive of Catholic Charities USA; retired Archbishop Joseph Fiorenza, former president of the U.S. Conference of Catholic Bishops; Sister Simone Campbell, Executive Director of the Network Lobby for Catholic Social Justice; and the presidents of the Leadership Conference of Women Religious and the Sisters of Mercy of the Americas. (Full disclosure: my organization, Faith in Public Life, helped disseminate the letter.)

The Christian leaders make a timely reference to Thomas Merton, the Catholic monk Pope Francis cited in his September 2015 address to Congress, who said: “Theology does not exist merely to appease the already too untroubled conscience of the powerful and the established.” Prayer, theology, and Christian discipleship should be counter-cultural because the Gospel is subversive. The Lord’s Prayer is radical and revolutionary. When we pray that God’s kingdom will be made real here on earth, we’re praying for a kingdom where the poor, the refugee, the sick, and the broken have the best seat at the banquet. Building that kingdom requires prayer, activism, solidarity, and moral resistance that are politically engaged but which ultimately transcend the politics of the day.

It’s hard to read Trump’s shameful executive orders that slammed the door on refugees from Muslim-majority countries without reflecting on the central symbol at the heart of the Christian story. Christ on the cross is a refugee, an asylum seeker, dark skinned, despised, both feared and afraid. People of faith who want to give moral cover to Trump’s actions turn their backs on Jesus. We have entered a time of authoritarian leadership that exalts the powerful and disdains the weak and vulnerable. This is the antithesis of Christianity, and it requires a reawakening of the Christian imagination and the building of a resistance that has no room for timidity or theological abstractions. In a recent speech, Rev. William Barber II, who launched the “Moral Mondays” movement in North Carolina and has called for “a moral and political Pentecost,” made this plain:

Pentecost is about a new thing — not simply the next chapter in an ever-evolving story, but a radical new thing — an interruption of the way things are that brings about a transformation for everyone involved. Thomas Kuhn called it a “paradigm shift.” The founders of this nation talked about it in terms of “revolution.” Dr. King referred to the zeitgeist. But whatever you call it, there are times when a deep, moral crisis demands that the way we have framed things up until now is insufficient. It is manifestly clear that we are living in such a time.

But the text from Acts helps us to see how, in this moment of political Pentecost, we need a new tongue, a new fire, and a new wind. If we get our language right, we can start to see some new things. And if we see by the light of that new illumination, we can start to feel a new wind blowing across this land. And when we all get together, the time is ripe for a political Pentecost.

People of faith and religious leaders have a unique role to play in the Trump era. We can slumber through the next four years or wake up to this moment’s encroaching darkness with our spirits on fire, girded by the timeless power of our traditions but always searching for what Pope Francis calls the “freshness and fragrance of the Gospel.” There is nothing easy or comfortable about moral resistance, but the lessons of history teach us that polite capitulation and accommodation with the powerful who trample on human dignity leads to disaster.