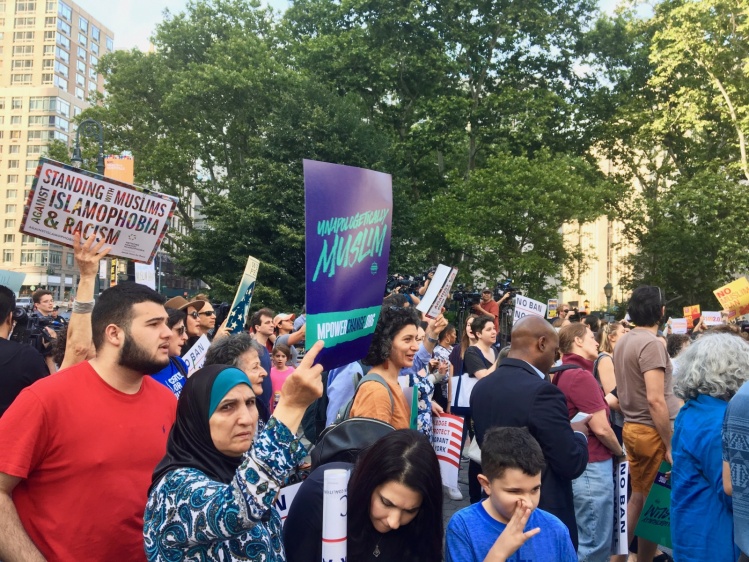 On the June day the Supreme Court announced its decision to uphold the Trump administration’s travel ban, a group of Muslim and Latinx activists banded together for a joint protest. In Lower Manhattan’s Foley Square, a lineup of speakers from Muslim, Jewish, and Latin-American organizations spoke before a crowd not only to condemn the court’s ruling, but also to address the ongoing humanitarian crisis in which government agents have separated children from their parents as a coercion tactic at the U.S.-Mexico border. Speakers explained the shared xenophobic origins of both the travel ban and family separation, and the policies’ impacts on the lives of individuals. Andrea Garcia, a Latina Muslim woman and an American citizen, described her separation from her husband, whom she met after immigrating to the U.S. from Colombia. He went to work in Qatar, thinking his stay would be temporary, but now he is unable to return to the States because he has a Syrian passport. She does not know when she will see him again. “We need people to understand that we don’t pose a threat,” she told me after the march had ended. “We’re just trying to see our loved ones and be with our families.”

The protest was typical of demonstrations since the 2016 election: rapidly organized and publicized on platforms like Facebook and Twitter, fiercely critical of Trump’s racism and cruelty, and overflowing with signs, mass-printed and hastily scrawled. But it differed from other such protests in one important way: it prominently featured religion. Together, the speakers and marchers demonstrated how some liberals are incorporating faith into activism as they step up to defend causes traditionally claimed by conservatives: family values and religious freedom.

Several speeches at the protest began with “as-salaam aleikum”: “peace be upon you.” In most Arab countries, this isn’t the standard greeting; there are plenty of popular ways to say “hello” that have no religious significance. “As-salaam aleikum,” on the other hand, is the formal religious greeting that the Prophet Muhammad taught his followers. The speakers who used it chose to make their faith as conspicuous as possible. The whole crowd responded: “wa aleikum as-salaam” (“and peace be upon you”).

Our brothers and sisters deserve the same public support from us that American Muslim leaders are offering to their communities. Why aren’t more of us taking to the streets when the moment so clearly calls for it?
sharetweet

Meanwhile, two activists directly invoked God in their speeches. Debbie Almontaser of the Muslim Community Network told the crowd, “God is on our side.” Her statement evoked Martin Luther King Jr.: “God is with this movement.” Bertha Lewis, the founder and president of The Black Institute, made an even more forceful reference to the divine when she shamed the few counter-protesters holding signs in the back of the crowd, including one that read “THANK GOD FOR TRUMP.” “I don’t know what God you serve,” Lewis bellowed, “but my God says damn Trump!”

Most protesters in the crowd were not so bold (or confrontational) as to assert that they could channel God’s will—but they did declare their faiths. Hijabs, abayas, and kippahs seemed to outnumber political t-shirts. Many of the demonstrators looked old enough to be grandparents. Others had children in strollers. Some carried purple signs that read “Unapologetically Muslim.” T’ruah, the Rabbinic Call for Human Rights, had printed signs reading: “Resisting tyrants since Pharoah.” Another sign from a Jewish organization connected present assaults on Jews and Muslims to the Spanish Inquisition and Reconquista with the simple digits “1492.0.” One woman had written the word of God on a piece of cardstock with a marker: “‘Cursed is one who subverts justice for the immigrant, the orphan, and the widow’ - Deuteronomy 27:19 #JewishResistance #TorahTrumpsHate #MyPeopleWereRefugeesToo.”

Before the protesters began their march across Lower Manhattan to Battery Park, Khalid Latif, the imam who directs the Islamic Center of New York University, said a long prayer for everyone assembled. When he was finished, the whole crowd said “Amen.”

I cherish the feeling of unity that comes from communal prayer, but I have only ever felt it in formal worship spaces. At previous protests I have attended, people of faith have certainly been present, but I missed that shared sense of purpose because prayer was missing. As one of many bowing their heads in a crowd praying for religious tolerance and the wellbeing of children, I felt a deep solidarity that affirmed the role of religion in efforts for social justice.

I only wish there had been a more visible Catholic presence at the protest. Catholic clerics, laypeople, organizations, and parish communities can contribute valuable religious perspectives on the obligations to welcome the stranger and care for children. This should be obvious to us, especially since so many of those fleeing violence, persecution, and poverty in Latin America are themselves Catholics. Our brothers and sisters deserve the same public support from us that American Muslim leaders are offering to their communities. Why aren’t more of us taking to the streets when the moment so clearly calls for it?