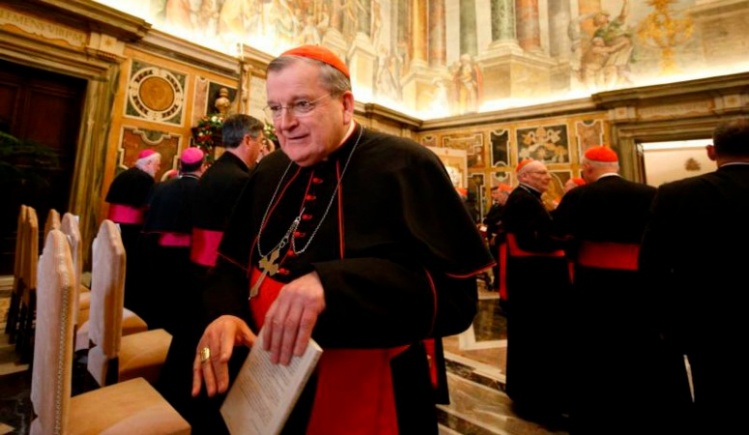 There has been a brief flurry of news stories speculating about the ideological affinities, or possible political alliance, between Stephen Bannon, the White House’s disrupter in chief, and traditionalist Catholic figures opposed to Pope Francis, especially Cardinal Raymond Burke (see Massimo Faggioli, “It’s Not Just Cardinal Burke,” at dotCommonweal). Bannon, the former head of the alt-right website Breitbart News, is a cradle Catholic educated (sigh) in Catholic schools. Thrice married and divorced, Bannon has nevertheless been described by at least one conservative Catholic polemicist as a “non-practicing orthodox Catholic,” someone whose “weakness” should not be mistaken for anything as boring as “dissent.”

Much of this fevered speculation was spurred by articles in the New York Times and the Washington Post. Both stories note that Bannon and Burke share a distrust of secularization, a loathing of liberal cultural and political elites, and an unapologetic hostility toward Islam. Bannon and Burke met in Rome in 2014, when Bannon was covering the canonization of Pope John Paul II and John XXIII. Reportedly, they established an immediate rapport. Speaking later that year to a Vatican conference sponsored by the conservative Dignitatis Humanae Institute, on whose advisory board Burke sits, Bannon struck predictable populist but also traditionalist Catholic themes, allegedly ingratiating himself with alienated Vatican insiders. According to the Times, Bannon has cultivated opponents of Francis in the Vatican, convinced that the pope is a “socialist/communist” who must be exposed. Truth be told, there is more innuendo than solid reporting on Bannon’s Vatican connections in the Times story (“Steve Bannon Carries Battles to Another Influential Hub: The Vatican”).

The Washington Post’s opinion piece, written by Emma-Kate Symons, is even more inflammatory, describing Burke as a “Donald Trump–defending, Vladimir Putin–excusing” leader of a “far-right, neo-fascist-normalizing cheer squad out of the Holy See.” Got that? Symons goes on to equate Burke and Bannon’s “anti-Islam invective” with the “vicious anti-Semitism many Catholic clerics adhered to in the 1930s.” She urges Pope Francis to purge the church of Burke and his ilk or face the threat of schism from the left (“How Pope Francis Can Cleanse the Far-right Rot from the Catholic Church”).

Why do dubious stories like these get traction? Part of the answer has to do with the extreme polarization of our politics, a divide that is increasingly evident within the U.S. church as well, and one that the USCCB’s litigation regarding religious freedom and Obamacare has sadly exacerbated. The news media’s fixation on the papacy, which is often given Wizard of Oz–like treatment, obviously also plays a role. The actions of popes and presidents are relatively easy to report on, compared with the complexities and varied personalities at work in the local church or in Congress. All too quickly storylines collapse into battles between villains and heroes, with precious little context to guide the reader.

There is no doubt that the sort of change, in emphasis if not doctrine, that Francis is bringing to the church has alienated a small but influential group of conservative Catholics. Improbably, in the Times story those who disagree with the pope’s actions cast him as “a ruthless wielder of absolute political power,” complaining that the wily Jesuit will brook no opposition. Yet the opposition has faced few obstacles in getting its complaints heard or in mobilizing supporters. How effective the resistance to Francis will be is unclear, but there is no evidence that it has been ruthlessly suppressed. And that is how it should be. Conscientious “dissent” has an indispensable place in the church’s development of doctrine, as so-called liberal Catholics have long pleaded.

What the brouhaha over Bannon and Burke fails to recognize is that the fate of Catholicism, as Francis himself constantly reminds us, is not being decided in Rome or Washington, but in thousands of parishes and Catholic ministries across this country and the world. It is there that both Catholics drawn to Francis and those disquieted by him will either find a way to forge real communion or not. This is a difficult but not unprecedented challenge. Cardinal Burke and his followers believe the church has the answers to nearly every moral dilemma, and that doubt of any sort is tantamount to heresy. Pope Francis, it is clear, very much wants to make room for doubters, or at least seekers, when it comes to questions such as Communion for the divorced and remarried. Our first task, as the Catholic philosopher Charles Taylor sees it, is to “hold together in one sacramental union modes of living the faith which have at present no affinity for each other, and even are tempted roundly to condemn each other.” As Taylor suggests, holding that sacramental union together is now every Catholic’s responsibility.