The Popes and Agriculture

From the March 1, 1940, Issue
By Luigi G. Ligutti Térèse
From the Archives 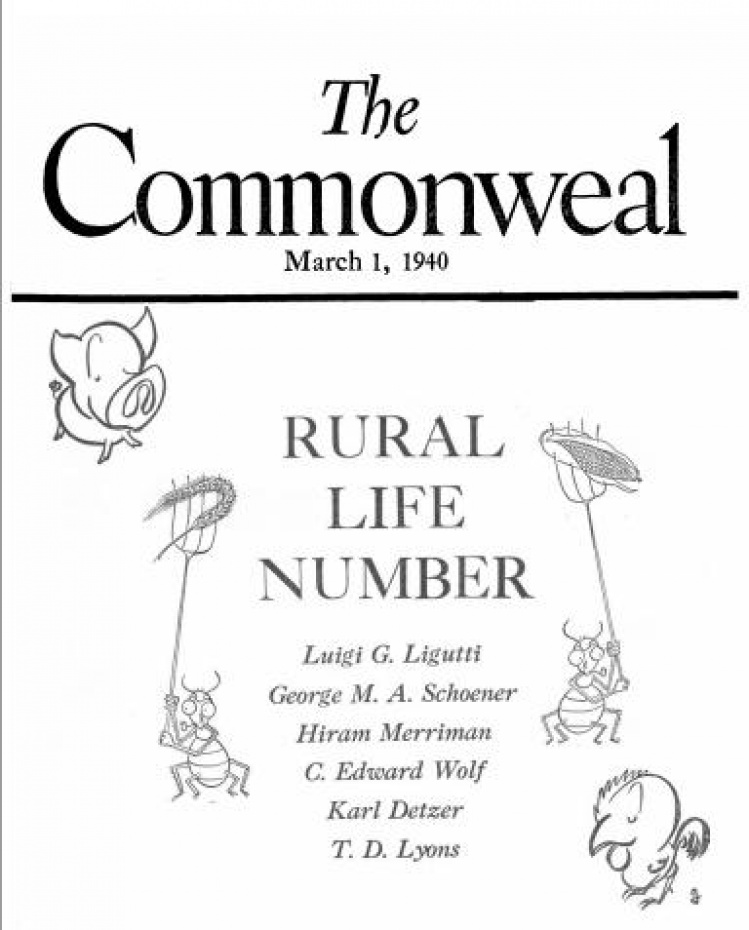 One late afternoon in June, 1741, Pope Benedict XIV was walking slowly up the hill which leads to the main entrance of Castel Gandolfo, followed by a small retinue of officials. To the west was the setting sun; to the east the Pontine marshes; venerable trees guarded the massive masonry walls of the town; the cobblestone highway was flanked by closely packed shops and dwellings. As the Pope moved along, people knelt and were blessed, while the usual street urchins circulated about. A small group of men stepped away from the wall where they had been awaiting the return of the Holy Father.

"Santo Padre," began the leader, and the Santo Padre stopped. He was a father as well as a king to his people—"if you want an honest man, elect me," he had said at the conclave.

The grievance was briefly stated: land owners had forbidden the poor people to exercise their immemorial right of gleaning in the harvested fields. A fatherly assurance of Christian justice and charity, a few consoling words, a blessing, and "the honest man" passed through the portals of the castle.

In May, 1742, and again in May, 1751, this same Pontiff issued edicts in response to the complaints of the Gandolfian peasants. The Biblical custom of gleaning was to continue and could be freely exercised.

This story is told in one of Tomasetti's four large volumes that contain a veritable treasure for any one interested in Catholic ideas and attitudes on rural life. This work quotes no less than
240 papal documents concerning agriculture—edicts, bulls, motu proprios—from 1493 to 1870. Another invaluable work of reference is that by Nicola M. Nicolaj, Memorie, leggi e osservazi­ oni, published in Rome in 1803, which contains a complete set of papal regulations on the subject and even detailed financial accounts of the production, sales and expenditures in various farming units in the Campagna.

A short article for popular reading cannot, of course, do justice to the subject of papal pronouncements on this question. A complete study and editing of the texts of such pronouncements would form a valuable historical project to be undertaken by students of agrarian economic history. Single out a few specimens in the paragraphs that follow, and as the reader considers them, he should bear in mind the philosophical, theological, social and economic implications of such practical and specific rulings.

There is an edict of Sixtus IV (d. 1484), followed by one of Julius II (d. 1513), which relates to the property rights of land owners. The proprietors of large estates had decided that it was less troublesome and less expensive to pasture most of their land.  Fewer laborers were needed and more horse flesh could be raised. As a result the poor people suffered from unemployment and even from hunger, while productive fields lay idle. It was a case where it was necessary to put into practice the natural law that the resources of the world were created by God for all human beings to work at and enjoy. So, exercising the right of eminent domain, the two Popes ruled that one­third of the untilled land might be occupied by landless peasants for purposes of cultivation with­ out the necessity for securing any permission from the legal owners of that land.  Naturally such edicts did not suit the pleasure of large land owners, so Adrian VI (d. 1523) and Clement VII (d. 1534) had to renew these edicts.

During the reign of the latter Pope, the Colonna faction, together with other land owners, employed a lawyer, Batista Casali, to plead their cause. He is described as "facondo" in his powers of eloquence. He read a polished oration before the Holy Father. It was filled with sophistry and it went as far as accusing the Pope of Lutheranism because of the Pope's "freedom of tilling" decision.

A later Pontiff, Sixtus V ( d. 1590), who is said to have been a swineherd when he was a boy and who threw away his crutches when he was elected Pope, in speaking of unjust and greedy land owners, said : "The best sacrifice one can offer to God is fulminare i scellerati." That puts one in mind a little of the Irish priest who is said to have told a penitent, who had accused himself of murdering his landlord, to go out and commit a mortal sin.

A few other items

Here is a selection of other decrees which may be suggestive to the reader:

Our friends of  the Society for the Prevention  of Cruelty  to  Animals  would  find  consolation  in the pronouncement of February 13, 1561, by the then Cardinal Camerlengo, relating to "il  Tiro  delle bufale," which  incidentally forbids the overloading of oxen.

Some of us priests who milk a cow, keep poultry, or care for a vegetable garden, may find authority for our actions in a statement by Pope Clement VIII (d. 1605), who declared that it was "licit and permissible" for clerics to pursue agriculture.

Paul V, on October 6, 1608, decreed that oxen could not be mortgaged and that a peasant could not be kept in prison for debt at seeding or harvesting time.

Those who find themselves troubled with animal pests of all sorts will find comfort in a bando, dated February 10, 1688, by Cardinal Cybo, ordering and directing the extermination of crickets. Mice and rats came in for equally severe treatment by Cardinal Ottoboni, on June 7, 1690.

Those who were hoarding grain and other agricultural products for speculative purposes were severely reprimanded by Papal order through Cardinal Colonna, on December 19, 1759, and appropriate penalties were attached to such offences and to increases in prices.

On September 23, 1765, Cardinal Rezzonico issued regulations for the extension of credit for the purchase of seeds.

The last specific Papal action relating to agriculture is dated August 23, 1870. It orders the conservation of trees along the banks of the Tiber within twelve miles of Rome, and reminds one of the bull of Sixtus IV (January 22, 1587) which deals with the upkeep and care of rural bridges, roads and wayside springs. But the Papal document par excellence on agriculture is the motu pro prio of September 15, 1802, issued by Pius VII. Here are two of its salient passages:

Agriculture is the first and most important of all arts; so it is also the first and true riches of states...To render onerous the conditions of the tiller of the soil tends to restrict his activities and rural industry, so We attempted to reduce anything prejudicial to the interest of  agriculture.

The wisdom of farming as a way of life and the necessity for diversified farming is well set forth in a paragraph of this motu proprio: “Agriculture embraces all rural economy (i.e., a varied
diversified production) so that one failing the others will supply the needs."

Leo XIII, in 1891, said: "Men always work harder and more readily when they work on that which is their own"; Pius VII, in 1802, wrote: "The product of hired hands [referring to migrant workers] is not as good as that of the owner of the land." At the time of the issuance of this motu proprio a graduated land tax was applied to the proprietors in the Agro Romano so as to effect a reduction in the size of farms, but Pius VII carefully pointed out that "not all will be cured by this taxation method."  The provisions he made for a resettlement project in the perennially reclaimed Pontine marshes should call forth the admiration of people today: "No settlement is to be established in an out of the way place. Social surroundings must be considered and properly planned." Good water for man and beast must be available. The roads must be wide. A parish church must be established, and for a period of years no tithes are to be paid and no emoluments of any sort are to be paid to the pastor. The Holy See was prepared to provide for his support. A house for the doctor was to be built and medical services to be rendered free of charge.

Provisions were to be made for orphans of original settlers. Those who needed hospitalization were to be provided for in Roman hospitals. When more land was to be reclaimed and new units added, the married sons of settlers were to be given preference.

We have heard of Mary Arnold's using model houses for the teaching of building methods in Father Tompkins's Nova Scotia cooperative housing project. A splendid idea, but not altogether new: Pius VII ordered that settlers be given models of their houses and that they be instructed and supervised in the process of building them. Prizes were offered for the best designs of houses and wells. Artists were encouraged to produce new agrarian utensils. Tree nurseries were to be established for shade and fruit trees.

It is interesting to visit Littoria, Mussolini's greatest work of peace, and to see the ideas of Pius VII actually being worked out.

Some may think that since 1870 the Popes have forgotten agriculture.  Here are a few sentences from an informal talk delivered by Pius XI in January, 1938, before 2 ,500  Italian  rural  priests who had won prizes in "the battle of  the grain":

Your work has been recognized as a priestly work integrating the other work which you carry on among the rural population... the works of assistance... good advice... fatherly help... that work  which is as important because it is  for  the  conservation  of this golden mass which is the  rural  population of every country…. I learned to know and to love this population of the fertile plains, of the rich valleys, of the smiling hills, of the sublime mountains…. It is most praiseworthy for you rural priests to spend yourselves in the service of the spinal chord of the country… in the service of these who are accustomed to daily work from dawn to sunset… who partake of frugal and measured food… they who are the producers of every gift of God… during the battle of the grain you have been to them the fathers, the guides, the counselors, the models, the teachers….  Your mission is to be present where the glory of God is at stake… for the welfare of men who are made up of body and soul…. Their bodily welfare should also be your care because it redounds to a most beneficial influence in the spiritual order…. You do well to work among the rural population which deserves your efforts even though it remains the part of the work which is more modest, less glamorous, but where abound these little ones of God, these poor in the Lord, these friends of Jesus Christ.