Not in My Parish
By Fr. Nonomen
Liturgy
Spirituality
Columnists 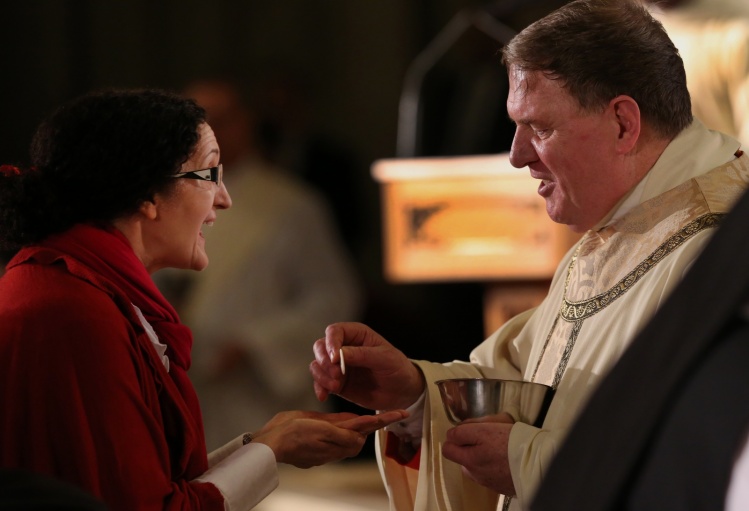 You never know where God will surprise you.

In the middle of a hot summer, while I was standing in the produce section at the local supermarket, a woman I had never met tapped me on the shoulder and introduced herself. She told me that she and her husband were not parishioners but had experienced an amazing Lenten journey at my parish. For the past two years, she said, they had fallen into a spiritual malaise. That began when the pastor of her own parish left the priesthood. He was a popular man, highly charismatic, and deeply spiritual. His unexpected departure brought to a head many issues in the church that she and her husband struggled with. Changes to their home parish also disoriented them. Looking for some fresh air, they had prayed their way through Lent with us and then joined us for the Easter Vigil. It was there, she said, that God gave her a gift: she watched as her former pastor and his new wife (who were never before at any of our Masses) joined the Communion line and received the Eucharist. “In that moment, I knew,” she said. “I was suddenly filled with a joyful, peaceful assurance that the church I love would weather the storms and issues that seem sometimes to tear it apart. Seeing Father Ed with his wife showed me how God is always doing something new! As they received Communion, I saw that there is room for all in Christ. And that has helped heal my heart.”

I walked away from this exchange with a bag of tomatoes and a grin on my face, thinking she doesn’t realize just how amazing the Communion line was that night. Besides Ed and his new wife, there were other Catholic priests and even a Protestant minister and her wife. Also, I saw a prominent local political leader, well known in the community and healing from a recent, very-public divorce. There were professional theologians and professional electricians. There were college students and middle-school students; the newly married and the recently widowed. It seemed that the depth and breadth of humanity was in the Communion line, all of their lives containing stories of hope and all of them, in that moment, drawn to one table, one altar, one Lord. I saw it. I sensed it. It was a foretaste of what liturgists call “the heavenly banquet.” I am so grateful that my new friend, the evangelizer in the produce department, saw it as well.

The people of the Kingdom are a diverse people, aware of their need and drawn to the God who welcomes all
sharetweet

As you might imagine, it didn’t take long for all these lofty thoughts of the Kingdom to come crashing back to earth. I thought of the diocesan administration and of how some might be extremely concerned about the “scandal” this sort of Communion line could cause. But as a participant and witness, it seemed to have the opposite effect, a healing effect. Of the hundreds who attended the Vigil that night, no one wrote a nasty letter of complaint, no unkind word was heard, not even so much as a passing sarcastic comment. Many noticed the same things I did that night and many were inspired.

How does this happen? To begin with, the Vigil Mass cannot be taken out of context. Throughout the year, the people of this parish make a deliberate effort to be hospitable and welcoming. That is especially the case for the Vigil, which is touted as the high point of the liturgical year. No one is checking “Valid Catholic” cards at the door, and no one feels a particular need to be a Communion Cop. We recognize that we’re all a bunch of needy sinful people, who are eager to make room for others at the Lord’s Table. Add to this a year-long, parish-wide emphasis on the religious education of adults, both through formal catechesis and in the way we run a picnic or a liturgy or a parish council. Education has a broadening effect, which hopefully trickles down to the heart. The wider the heart, the easier it is to see the working of God and, consequentially, the longer the Communion line.

The more intriguing question, perhaps, is not how but why this happened. I figure it to be a lesson in grace. At a time when elitism and intolerance have crept into so many facets of life, the Lord insists that the Kingdom of God will be otherwise and often surprises us with glimpses of it right here, right now. The people of the Kingdom are a richly diverse people, aware of their need and drawn to the God who welcomes all and lavishes grace on all, even that former priest, even that same-sex couple, even that unsuspecting cleric in the produce department who thought he was only going home with a bag of tomatoes.