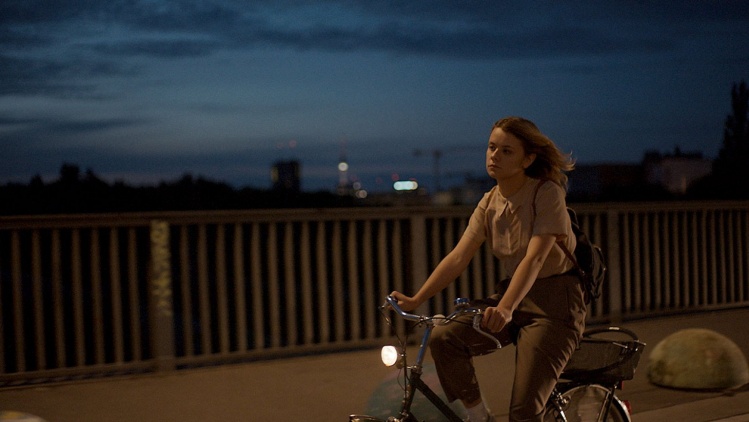 Dasha Nekrasova as Charlie in ‘Softness of Bodies’

“Your honor, I’m just a late capitalist subject navigating a vicious and frankly unfair system. Isn’t the culture industry truly to blame, for producing these desires in me—and failing to provide me with the means to fulfill them legitimately?... I’m as much if not more of a victim of the store I shoplifted from.”

Many people would find this type of reasoning specious and self-serving. Deploying shibboleths like “culture industry” and “late capitalism,” these lines read like a pastiche of leftist thought: capitalism creates false desires; unjust social structures make crime more likely to occur; the capitalist class has greater agency than the would-be consumer. In our current moment, which has seen a rebirth of class-based politics, we might be more likely than we were in the recent past to feel at least some sympathy for this kind of argument. Sympathetic or not, however, we might also find ourselves laughing. For these words are uttered in a courtroom by the hapless protagonist of Softness of Bodies, a comedy about an entitled white American twenty-something living a bohemian life in Europe. She’s been charged with shoplifting expensive designer clothes.

Directed by Jordan Blady and first released in 2018, Softness of Bodies has recently enjoyed a second life due to its release on Amazon Prime and the rising profile of its star, Dasha Nekrasova. (Nekrasova is the co-host of Red Scare, a popular Manhattan-based podcast about politics and culture.) The film merits this renewed attention, both because of the depth of its themes and because of Nekrasova’s magnetic performance.

The character played by Nekrasova, Charlotte “Charlie” Parks, is both a poet and a thief. An American layabout living in Berlin, Charlie spends her time hanging out with her lover Franz (Moritz Vierboom), engaging in quasi-therapy sessions with her infinitely patient roommate, Remo (Johannes Frick), and reading her poetry in coffee-shop performances. This poetry (written by Nekrasova) is formless and wistful, usually a list of items or observations united by an idea, which surprises halfway through with an arresting line: “I don’t want to die in this party”; “The thing about bodies…they rot…and money can’t stop it.”

Charlie shoplifts not because she’s poor but because she’s a kleptomaniac (“I can’t help it”). However, she and her roommate certainly don’t have much money: she can barely afford to buy laundry detergent, and when she asks Remo for eight hundred euros to pay a fine, he responds, “I don’t have ten euros.” Somehow she gets by, and it would be wrong to say that she lives in poverty. But she does live in the type of squalor that often comes when you’re only getting by.

Poetry and metaphorical theft have often been linked. “Immature poets imitate, mature poets steal,” Charlie says, quoting T. S. Eliot. (She’s accused of plagiarizing from American poet Kenneth Koch’s work.) Poetry and theft are the two activities through which Charlie escapes the world of money, competition, and opportunity-cost calculations that is stressing her out. Poetry is free creation, and theft means free shoes.

When she’s not writing or stealing, Charlie gets through life by reducing the friction between herself and the world. She glides, on a bike, through Berlin—where she is an alien, rootless and ignorant of the local language—and jumps from reading to reading, conversation to conversation, seemingly without a clear objective or overarching ambition. She works in a coffee shop and writes poetry on her phone while reclining by a window or riding the subway (in fact, she makes writing verse on an iPhone look cool, and I hope this becomes a trend).

She is a descendent of the American-in-Europe of James, Fitzgerald, Hemingway, Stein, and Baldwin. But her closest cousins are Hannah of Girls and Patricia of Godard’s Breathless: Charlie is (like Patricia) an untethered and insouciant American sauntering through Europe, but (like Hannah) also an artist anxious to make it in the post-2008 economy. Charlie is not happy. The line about “navigating a vicious and unfair system,” while grotesque in connection to her shoplifting, is maybe less so when applied to her life as a whole.

Early in the film Charlie learns that she is a finalist for a poetry grant. “If I get this grant, I’ll be like a real adult. Like an actual poet, I’ll be published,” she tells Remo. Sylvie (Nadine Dubois), a rival poet, has been tapped as the other finalist for this grant. Charlie doesn’t like Sylvie, and Sylvie tries to derail Charlie by sleeping with her ex-boyfriend, Oliver (Morgan Krantz). (Oliver, a photographer, has followed Charlie to Berlin, in an apparent attempt to win her back.) Her path to adulthood is further obstructed when Franz’s wealthy girlfriend, Marianne (Lena Reinhold), learns that Franz has been cheating on her with Charlie. These events all register as a comedy at first, but by the end they’ve taken a much darker turn. Softness of Bodies runs for a mere hour and fifteen minutes and seems to lack a final resolution. At the same time, it feels like two movies in one: the first half a comedy and the second, something more disturbing.

This second movie begins after Charlie is arrested for shoplifting. She can’t pay the eight hundred euro fine. She is desperate. On top of that, Marianne has exacted revenge by punching Charlie in the face, and knocking out a tooth. (Charlie gets free dental care in Germany, so at least she doesn’t have to worry about that extra expense.) What had been a movie about youth and the romance of the garret turns suddenly to the heavier topics of money and violence. It culminates with a confrontation between Charlotte and Marianne, who flaunts her money and demands that Charlie give up any drugs that she might have. A physical altercation with an ambiguous outcome leaves the viewer wondering whether Charlie is guilty of negligent homicide. She’s at least guilty of lying to the police.

Killing is obviously much worse than shoplifting, and Charlie now says something more cryptic and sinister—and not at all comic—in her defense: “I burn the way money burns.” She is beyond caring about good and evil, and takes refuge in the fact that all this time, her existence and identity have seemed effervescent, fluid, less than real. But Charlotte’s nihilistic pretensions are at odds with the good that she represents through most of the film. If she is as hollow as she claims to be, then who is it that speaks through her poetry? There was a noble side to Charlie: she loved art and she loved freedom. But this nobility is pulverized by the end of the film. Softness of Bodies calls out for a third act, in which Charlie would have to face the consequences of her actions and find a way to reconcile herself with the world.