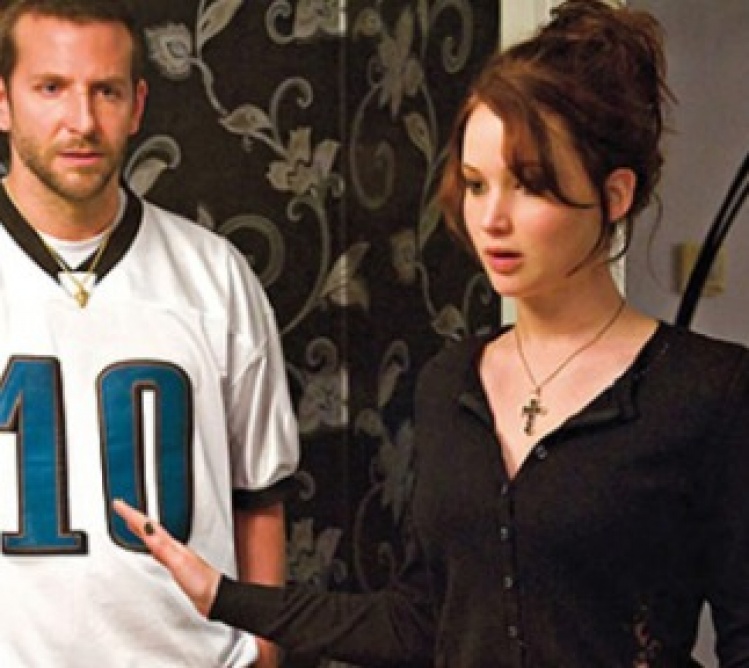 About fifteen minutes into Silver Linings Playbook, its hero, Pat Solitano—played by Bradley Cooper—is out jogging near his Philadelphia neighborhood when a young woman he met at a dinner party the night before runs across his path and greets him. In any other romantic comedy this would be the follow-up scene that firmed up the “meet cute” encounter of the previous night. This second meeting would be staged with playful mock-casualness, and the dialog would include lots of sexy banter and teasing as the lovers-to-be sized each other up.

Instead, writer-director David O. Russell delivers a few seconds that wouldn’t be out of place in a psycho-stalker horror movie. Tiffany, played by Jennifer Lawrence, bursts into view emitting a high-pitched “Hey!” that unnerves Pat and made the viewers near me in the theater jump in their seats. And this turns out to be oddly appropriate since at their earlier encounter Pat and Tiffany recognized each other at once as being a tad crazy. Having taken offense at a remark her sister (the hostess) made, Tiffany had jumped to her feet and announced she was leaving, then glared at Pat: “Are you walking me home or what?” “You lack social skills,” he murmured. “I lack social skills? You say more inappropriate things than anyone I’ve ever met.” And the walk home concluded with her propositioning him unsuccessfully, then melting into his arms, and finally walloping him across the face. Cupid’s arrow may have been loosed, but if so, it’s been dipped in acid.

But this is a familiar pattern, isn’t it? Hostility preceding love, hostility presaging love, hostility seasoning love. Think of Pride and Prejudice or Much Ado About Nothing. But Silver Linings Playbook gives this old pattern a modern twist: the lovers join in erotic combat fully armed with the verbal tools of therapy and self-development, as well as medicine cabinets bursting with psychotropic pills (though Pat believes he no longer needs them). Pat is bipolar and has just been released from a psychiatric ward, where he was sent after he beat up his wife’s lover. He lives at home with a father (Robert DeNiro) who’s an obsessive-compulsive gambler and a mother (Jacki Weaver) almost squashed by a household brimming with dysfunction. Tiffany, for her part, is weighted down with guilt because her husband died in a car accident before they could resolve some sexual problems. (He had taken a detour to buy a negligée for her.) For Tiffany and Pat, love wouldn’t be just romance but also therapy.

Pat, though, has already planned a different sort of therapy for himself: his “silver linings” project. By reducing his mood swings through sheer will power and treating those around him with more care, he will win back his estranged wife. Tiffany, who has settled on Pat as the key to her mental survival, regards this as sheer self-deception. She believes Pat has become so obsessed with restoring the past that he’s not alive to present possibilities. And Pat’s determination to transform himself without medication is, she thinks, sheer hubris. She makes it her project to destroy his project in the hope of saving both him and herself.

David O. Russell drew his screenplay from Matthew Quick’s serio-comic novel of the same title. Jettisoning the book’s final section, in which the hero goes totally haywire before finally returning Tiffany’s love, Russell amplifies the comedy of the one-sided courtship and curtails the storm and stress with a dance contest, thus bringing the action to a funny, goofily rousing, and forgivably sentimental close. Yet he doesn’t overlook all the mental disturbance inherent in the material. The Solitano shouting matches and occasional slugfests, filmed by a mobile camera that is everywhere in the domestic maelstrom, show us what Pat is up against. Tiffany, for all her own mental problems, is probably right about what he needs. And it is to the credit of DeNiro, Weaver, and Cooper that they keep the fundamental decency of the Solitanos in view even when the rows are at their noisiest. You feel the family’s sanity constantly burrowing through the temporary insanity.

But what really makes Silver Linings Playbook special is Jennifer Lawrence, who won the Oscar for Best Actress for this performance. After her fine work in Winter’s Bone and The Hunger Games, I expected something great from her some day, but I didn’t expect the masterpiece to arrive so soon. The physical intrepidity she brought to her earlier roles she now transforms into an erotic and psychological neediness that is at once pathetic, comic, and a little bit frightening, though her romantic ruthlessness never alienates the audience. Her face has the rosy wholesomeness of the girl next door, but the eyes blaze. What Lawrence achieves here is what Bernard Shaw philosophized about in Man and Superman and what Katharine Hepburn turned into knockabout farce in Bringing Up Baby: the woman as compassionate and life-enhancing predator, caring for her prey more tenderly than he can for himself.

What they say about New England weather can be applied to Steven Soderbergh’s Side Effects: if you don’t like it, wait a minute. Or, to be precise, wait about twenty minutes. This movie keeps sliding from one genre into another.

At first the script by Scott Z. Burns promises an intense psychological study. A young woman, Emily Taylor (Rooney Mara), retreats into herself when her husband, a Wall Street whiz kid convicted of insider trading, comes home from prison. Apparently suffering from sleep deprivation and low sex drive, she slams her car into a wall. A hospital psychiatrist, Dr. Banks (Jude Law), compassionate but a bit of a hot shot, prescribes a drug that at first seems to work, but soon Emily starts acting like a zombie. When her husband comes home while she’s chopping vegetables, she fatally stabs him in the stomach, then crawls into bed and blanks out while he pleads for her to call for help. Arrested and tried, she claims she remembers nothing of the deed. Shouldn’t the drug be in the dock, too? And what about the psychiatrist who prescribed it? In all the scenes leading up to the killing, Soderbergh draws us close to Emily by keeping the camera near Rooney Mara’s face, registering every tremor, every vibration of fear and distaste in the actress’s waif-like countenance. The cinematography by “Peter Andrews” (a pseudonym for Soderbergh himself), alternating betweeen a warm salmon-pink for the close-ups and the coldest of blues for Emily’s surroundings, makes us empathize with Emily as she withdraws from an unwelcoming world. The viewer naturally expects that this psychological drama will dig even deeper into Emily’s psyche as the movie proceeds.

Well, tough luck, viewer, because after the husband’s death, Side Effects turns (briefly) into a social studies discussion about the possibly catastrophic drawbacks of using wonder drugs to alleviate mental distress. The action shifts to Dr. Banks, well played by Law as a mixture of sincere kindness and frightened self-interest. And thanks to the good acting, believable dialogue, and Soderbergh’s pacey direction, the film retains the viewer’s attention despite this shift of focus. If we can’t have a Bergmanesque character study, at least we’ll get a big-screen installment of In Treatment.

Actually, we won’t. For the doctor discovers an evil plot motivated by revenge, greed, and lesbianism. Side Effects ends not as a psychological study, nor as a social drama, but as a whodunit.

Isn’t it legitimate, one may ask, for a thriller or mystery to deceive us for the sake of entertainment? Well, when you sit down to read an Agatha Christie story or watch a Hitchcock film, a bargain is struck: the storyteller will try to hoodwink you, and you will delight in being hoodwinked as long as it is done cleverly. But when Soderbergh and Burns spend nearly ninety minutes of screen time convincing you that you are watching a serious study of people in torment and then throw away everything they’ve achieved for the sake of a surprise ending, the wrong sort of hoodwinking has taken place.