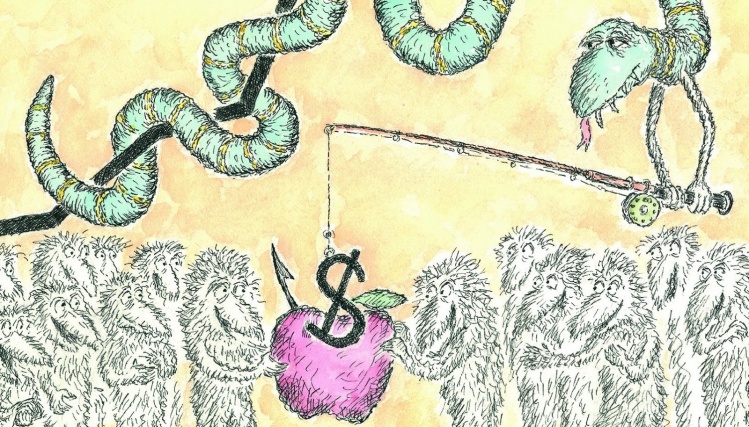 When it comes to writing about economics for the layman, it turns out that even Nobel laureates can relax and have fun. Introducing themselves as “Bob and George,” the renowned economists Robert J. Shiller and George A. Akerlof invite the reader to rethink market dynamics in Phishing for Phools: The Economics of Manipulation and Deception. In the process they shine a lighthearted light in our dark places, illuminating everyday psychological questions alongside economic theory. How exactly does manipulation of the free market affect the workings of Adam Smith’s invisible hand? When does slick marketing cross an ethical boundary and become downright slimy? And why do we buy what we buy? Bob and George will explain.

While making clear from the outset their fundamental embrace of capitalism, the authors proceed to question, in the lingering shadow of the 2008 financial crisis, just how the marketplace functions, and specifically what influences beyond supply and demand are in play. They raise an essential and uncomfortable question: Why didn’t economists see the crash coming? Their carefully chosen case studies suggest that the way we have looked at economics too often has neglected the human behavioral aspect. Human actions are not incidental to the marketplace, but embedded within it. The authors argue that economists ignore these behavioral influences on economic life at their peril—and ours.

For instance, consider the psychological element behind our purchases. A gym membership, a new car, a new drug: very often we buy to make ourselves feel better. Economists who discount this insight work with a big blind spot. They won’t see the many foibles at work in the market, won’t grasp why we spend a lot to feel like a good parent or to look younger, why we buy bad food or take foolish chances—like buying Powerball tickets or pumping money into slot machines. When the foolish chance is a subprime mortgage, and hundreds of thousands take it, behavior becomes economics.

Phishing for Phools marshals a vocabulary well suited to exploring such insights. Its examination of the recent financial crisis, for example, shows how ratings agencies eroded the integrity of the market by taking fees—payoffs, essentially—in exchange for the desired rating. This “mining of reputation” by investment banks provides a glaring example of the dangers of market manipulation, and sheds light on what the authors mean by a “phish.” An equilibrium is always at work in the market, they explain, with supply either falling behind demand or catching up to it—in much the way that retail checkout lines even out and shrink as shoppers choose the shortest line or rush to an empty register when it opens. In a similar manner, a healthy economy thrives through the efforts of economic players who act productively to fill a market vacuum. But creating a vacuum with false or misleading information can distort market workings, upending optimal equilibrium to produce an “unusual profit” for the schemers that inevitably leaves buyers worse off than they would be otherwise. That deceptive and distorting action is the “phish.”

The “phools,” of course, are any of us who are buying. From behavioral psychology, Akerlof and Shiller borrow the insight that all too many buyers do not merely choose what is best for themselves, but follow the dictates of “monkeys on their shoulders” to pursue emotionally driven purchases not in their best interest. The authors wax vehement on the subject of how such vulnerabilities are exploited by practitioners of the phish. Economic practices that “manipulate and distort our judgment,” they assert, “are analogous to biological cancers that make their home in the normal equilibrium of the human body.”

TO EXPLAIN why markets are so easily “phishable,” Bob and George apply an insight dear to marketers: it’s all about the stories we tell. They then ask their fellow economists to ponder the story we tell about our economic system: that the free market, if left to itself, will bring a prosperous society. They note that a counter-narrative, once widely espoused by Americans, held that “government programs and laws...addressed real needs,” and that “government, used effectively, can be genuinely beneficial.” The authors call this the “Old Story,” while today’s “New Story” tells us that “government is the problem” with the economy. Put forward relentlessly by advocates of unhampered capitalism, this second story now dominates both economic policy and politics, as seen in the loosened regulation that enabled the Madoff scheme and in the Supreme Court’s Citizens United decision, which conjoined free-market thinking to the interpretation of free speech. All in all, the environment created by this “New Story” ideology makes for easy phishing.

The “New Story” has old origins. Ever since The Wealth of Nations, people have been identifying the pursuit of private interests with the promotion of the common good. Phishing for Phools insists that a capitalist economy offers the best hope for prosperity, but also warns that a healthy market is perpetually subject to the “cancer” of manipulation. It’s important to note that in making this diagnosis, the authors are not singling out the routine hype practiced by advertisers or sales reps. They are after, so to speak, much larger phish: the misuse of rating systems, co-opting of regulations, and “story sculpting” maneuvers that they maintain have constituted economic harm on a scale unseen in prior generations. They acknowledge that many economists are likely to respond by saying, “Nothing new here!”—but they point out that when the calamity of 2008 happened, most economists were caught out in the cold.

Phishing for Phools presses these economists to question the long-held assumption that free markets are best left untended. Bob and George urge us to slap Adam Smith’s invisible hand when it steals from everybody’s cookie jar. They ask us to ponder those situations, economic or political, that provide particularly tempting opportunities to phish for phools—situations that they believe demand regulation, for the sake of a healthy economy and the common good. With its penetrating insights rendered in accessible prose, this book constitutes appropriate reading for students of social ethics, Catholic Social Teaching, or marketing and public relations. Or you can read it just for phun.

Marlene Lang is a PhD candidate at St. Thomas University.