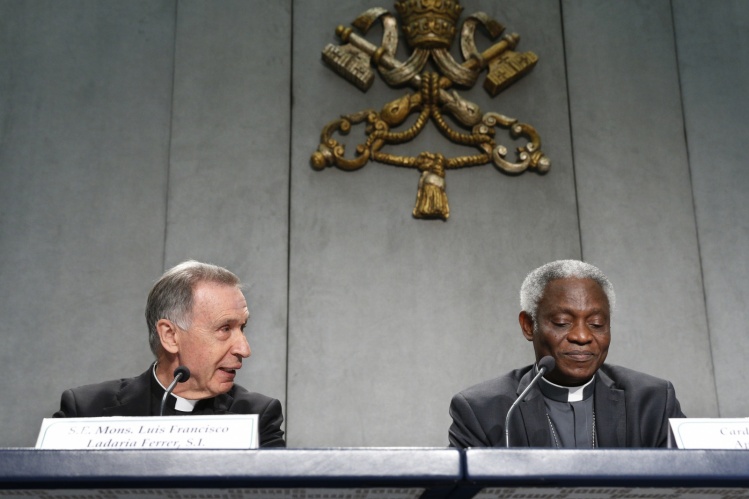 Archbishop Luis Ladaria, prefect of the Congregation for the Doctrine of the Faith, and Cardinal Peter Turkson, prefect of the Dicastery for Promoting Integral Human Development, lead a May 17 Vatican news conference for the release of a document on the moral dimensions of economic activity. The new document, approved by Pope Francis, says financial and economic decisions can be virtuous or sinful. (CNS photo/Paul Haring)

Two days after the anniversary of Leo XIII’s Rerum Novarum (1891), two dicasteries of the Roman Curia—the Congregation for the Doctrine of the Faith and the Dicastery for Promoting Integral Human Development—published a new document titled Oeconomicae et pecuniariae quaestiones: Considerations for an ethical discernment on certain aspects of the current economic-financial system. Its thirty-four paragraphs go from general moral principles to practical proposals for reforming the international financial system.

Addressed “to all men and women of good will,” the document presents an analysis of the financial system in light of the crisis that began in 2007. The key message of the document is that the financial industry is incapable of governing itself adequately; “appropriate regulation” will require government intervention. As it is, the system is unsafe. It aggravates inequality and thrives on the exploitation of the weak and the poor. The document even calls the financial products known as derivatives “a ticking time bomb ready sooner or later to explode, poisoning the health of the markets.”

Oeconomicae et pecuniariae quaestiones begins by reasserting the Catholic view of society as a network of relationships “between individuals but also ‘macro-relationships, social, economic and political ones’” (par. 2). It insists on the importance of “liberty, truth, justice, and solidarity” in an economic-financial system that often appears to function in an ethical void where the only imperative is to maximize profits.

The document recognizes that the current system has produced a great deal of wealth, while pointing out how poorly distributed this wealth is, most of it going to a small minority of investors. It treats the financial crisis of ten years ago as a wasted opportunity “to rethink the obsolete criteria that continue to govern the world” (par. 5). The economy needs freedom of initiative, but that freedom “creates centers of power that incline today toward oligarchy” (par. 12). There is no way to correct this tendency without more regulation: “it is clear that markets, as powerful propellers of the economy, are not capable of governing themselves” (par. 13). That leaves politics, but political leaders cannot regulate the economy without a long-term vision of the common good: “political and economic-financial powers must remain distant and autonomous and at the same time directed, beyond all proximate harms, towards the realization of a good that is basically common, and not reserved only for a few privileged persons” (par. 21). The document criticizes openly the “massive deregulation” of the financial markets, and calls for a “supranational co-ordination among diverse structures of local financial systems” (par. 19) and “a stable, clear and effective coordination among various national regulatory authorities” (par. 21).

This is a political document in the sense that it calls—once again—for politics to do its job and stand up to those interests in the defense of the common good.
sharetweet

The CDF and the Dicastery for Promoting Integral Human Development recommend “a clear definition and separation among banking responsibilities for the management of credit, of the ordinary daily management of credit, of investment savings, and of mere business” (par. 22). They describe exotic new financial products, such as the credit-default swaps that caused so much trouble during the financial crisis, as part of “a kind of economic cannibalism” (par. 26). A series of paragraphs toward the end of the document are devoted to a detailed criticism of “offshore operations” and tax havens.

This is the first joint document published jointly by two dicasteries during Francis’s pontificate. Cardinal Turkson, prefect of the Dicastery for Promoting Integral Human Development, played an important role in the drafting of Laudato si’ and here confirms his key role in crafting Francis’s message on global social and economic issues. The fact that the CDF is one of the two dicasteries gives theological weight to Francis’s social teaching on the economy, making it more difficult for Catholic critics to minimize this teaching as merely “prudential.” Since the departure of Cardinal Mueller in July 2017, the CDF has taken a more visible role in this pontificate (for example, with the recent letter Placuit Deo), a signal of the good relationship between the pope and the new prefect, the Spaniard Jesuit Luis Ladaria Ferrer. At the press conference for Oeconomicae et pecuniariae quaestiones, Ladaria acknowledged that this is a new kind of document for the CDF.

That does not mean it comes out of nowhere. In fact, the document is steeped in the tradition of modern Catholic social teaching, especially post–Vatican II developments in that teaching: not only Francis’s own Laudato si’, but also the work of his predecessors. Benedict XVI’s Caritas in veritate (2009) plays a particularly important role and is the most frequently quoted source; many of the new document’s proposals echo that encyclical, which was written in the immediate aftermath of the crisis.

Oeconomicae et pecuniariae quaestiones repeats and develops one of the main points of Francis’s teaching about the church in the world of today—that is, the apparent impotence of political power in the face of deeply entrenched financial interests. This is a political document in the sense that it calls—once again—for politics to do its job and stand up to those interests in the defense of the common good.

There is a clear conflict between the libertarian, free-market capitalist agenda and the pope’s proposals for more regulation
sharetweet

There is a clear conflict between the libertarian, free-market capitalist agenda and the pope’s proposals for more regulation—at both the national and international levels. But this document cannot be neatly framed in liberal-versus-conservative terms. Not only because support for appropriate regulation of the economy by political authorities has been part of Catholic social teaching at least since Rerum Novarum (it can’t be dismissed as an innovation of feckless modernists), but also because Oeconomicae et pecuniariae quaestiones does not fit neatly into any of the standard orthodoxies in political economy. No one would call it Marxist, given its emphasis on the importance of freedom of initiative. At the same time, it offers a strong, though mainly implicit, critique of neoliberalism that has dominated elite opinion in Europe and the United State since the 1990s.

It will be interesting, then, to see how this document is received in those Catholic circles—in Washington, on Wall Street, and in the business schools—that have allied themselves with the interests of the financial elite. Economic deregulation, the lionization of “wealth creators,” and a sometimes-hypocritical turn to “values” and personal virtues as the only possible solutions to structural economic problems—all these symptoms of neoliberalism have permeated the theological culture of American Catholicism. This document directly challenges a culture and educational system that have become subservient to high finance. It is especially critical of business schools, and its criticism presumably extends to the business schools of Catholic universities, which do not differ greatly from their secular counterparts.

Oeconomicae et pecuniariae quaestiones confirms Francis’s intention of expanding the moral agency of the Catholic Church toward a wider spectrum of issues. His condemnation of economic and financial evils is more radical—more frequent—than that of either John Paul II or Benedict. His focus on such evils is an integral part of his pontificate and one of the reasons for the opposition against him.

This new Vatican document demands that we not ignore the deep and persistent problems revealed by the most serious financial crisis since the Great Depression. Much of the rest of the world, including the party now in control of the U.S. government, would rather forget it, or treat it as an anomaly. The bishops of the United States—the hub of global capitalism—have been unable to produce anything like this document, despite proposals made by some bishops at the USCCB’s fall assembly in 2015. On social-economic issues, Benedict and Francis are much more “in continuity” with each other than the U.S. bishops’ conference can claim to be with either of them.