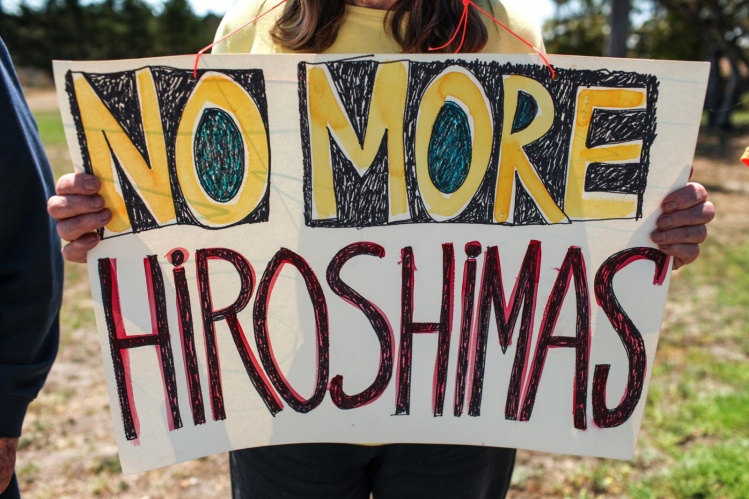 In 1963, Pope John XXII wrote in Pacem in terris, “In our time, which prides itself in its atomic weapons, it is contrary to reason to hold that war is any longer an appropriate means to restoring violated rights.” Twenty years later, in 1983, the U.S. Conference of Catholic Bishops issued The Challenge of Peace: God’s Promise and Our Response. In it the bishops held that the possession and maintenance of nuclear weapons was morally acceptable only on a temporary and conditional basis, the condition being that time be bought to achieve negotiated general multilateral disarmament. Last November, thirty-six years later, having informed the United Nations through the Holy See’s representatives that time had run out—that the condition had not been achieved—Pope Francis made it clear that there is no longer any legal or moral justification for the construction, possession, or maintenance of nuclear weapons.

It is hoped that within a few months a small delegation from the peace movement in the United States will travel to Rome to discuss the issue with Cardinal Turkson and the staff of the Vatican Justice and Peace Commission, and, with any luck, Pope Francis himself. Does it not seem appropriate that the church go on record in defense of anyone, civilian or military, who refuses in good conscience to participate in the deployment or maintenance of nuclear weapons, and that a form of conscientious objection be instituted in law to protect any such individual from negative sanctions? Of course, it is hardly likely that the United States or any of the other nuclear powers would institute such legislation. Maybe Andorra and Costa Rica! But it would be a significant moment if the church took that stand.

The church now supports its conscientious objectors. That was not always the case.
sharetweet

I doubt there is a Catholic parish in this country where all regular Mass attenders do not know the church’s stand on abortion. The Catholic governor of New York, Andrew Cuomo, objected to Cardinal Dolan’s January 2019 letter denouncing the so-called Reproductive Rights legislation, which allows not only for late-term abortion but also for withholding medical attention from infants in certain circumstances. We are proud of Cardinal Dolan’s clarity and forcefulness of expression. Would that pastors, preachers, and regular Mass-goers knew the position the church has taken on war and peace issues, especially weapons of mass destruction. Is not failure to address these issues—and failure to help Catholics form a conscience on these issues—a failure in the performance of pastoral duty? What holds bishops and priests back? Is it fear? Concern for the collection plate? Such a concern would not be irrational, but they must not yield to it. Conscience formation on issues about which the church is at odds with conventional wisdom can be done without sending people running for the doors, as long as it is done with patience, prudence, and a proper regard for people’s sensitivities.

At the height of the Vietnam War, I was invited to preach at all of the weekend Masses at the church that serves the Catholics of Los Alamos, New Mexico, the birthplace of the atomic bomb and a major center of the nuclear-arms industry. I advised the parishioners, many of whom were no doubt involved in the weapons industry and Los Alamos National Laboratory, that such involvement should be examined in conscience. No one walked out. The pastor invited me back. People need to be helped to understand these issues, but they don’t need to be bullied.

The Catholic Church has at long last become a peace church—not a pacifist church, but a peace church. That is to say, the church now supports its conscientious objectors. That was not always the case. Ben Salmon, a World War I Catholic conscientious objector, could get no priest to minister to him in prison. His cause for beatification is now being prepared for the Vatican. The great majority of Catholics do not claim conscientious objection to war or military service. Neither does a majority of Quakers. But Quakers honor their peace witness, and so will we. During the Vietnam War, Roman Catholics were overrepresented among draft resisters. The first demonstrations against U.S. participation in the Vietnam civil war were held in July 1964 by the Catholic Worker movement in New York City. We started with two people and ended with 250, and coast-to-coast television coverage. The first act of corporate resistance to the Vietnam-era draft was held in New York City at Union Square on November 6, 1965, again sponsored by the Catholic Worker along with the Committee for Nonviolent Action. It’s time for the church to take the lead on this issue, to make good on the commitment to peace and disarmament that Pope John XXIII undertook more than fifty years ago.