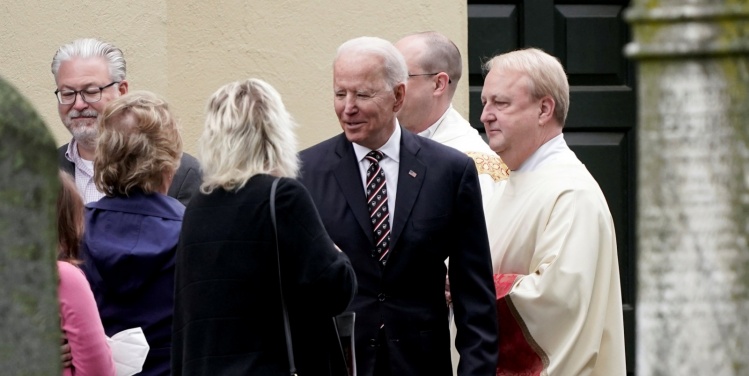 “As a convert, I never expected much of the bishops,” Dorothy Day wrote in a 1968 letter. “In all history, popes and bishops and abbots seem to have been blind and power-loving and greedy. I never expected leadership from them.” Many Catholics, and not only converts, would agree with Day’s jaundiced view of bishops—and June’s meeting of the U.S. Conference of Catholic Bishops reminded us why that’s the case. President Joe Biden’s worthiness to receive Communion dominated coverage of the proceedings, a predictably divisive outcome that underscored the bishops’ political obtuseness and pastoral failings.

Not long after last year’s election, USCCB president Archbishop José Gomez announced that a special working group would be formed to deal with Biden—the nation’s second Catholic president, but one whose support for legal abortion created what Gomez called an unusually “difficult and complex situation.” Then, on the day of Biden’s inauguration, Gomez issued a statement that emphasized where they disagreed, “most seriously in the areas of abortion, contraception, marriage, and gender.” In February, the USCCB’s working group recommended that a document explaining Church teaching on the Eucharist be drafted, and that it insist on “the fact that our relationship with Christ is not strictly a private affair.” When that proposal was taken up by the U.S. bishops last month, most observers assumed it was aimed at Biden.

The USCCB’s leadership has since tried to walk back any suggestion that they had Biden in mind. “The question of whether or not to deny any individual or groups Holy Communion was not on the ballot,” they claimed in a recent press release. “The vote by the bishops last week tasked the U.S. Conference of Catholic Bishops’ Committee on Doctrine to begin the drafting of a teaching document on the Eucharist.” Alas, their protests were betrayed by bishop after bishop who couldn’t help blurting out during the meeting that Biden was the problem.

It is not too late for the U.S. bishops to contribute to a better dialogue about “Eucharistic coherence,” and this would begin with humility.
sharetweet

If the bishops’ bumbling was to be expected, responses to it have often been unsatisfying. Some critics have called out the bishops for their lack of consistency—why the reluctance to discipline Catholic politicians who support the death penalty, for example? It’s a fair point, but one that can only end with the Eucharist becoming precisely what Pope Francis has said it’s not: a “prize for the perfect.” Others seem to suggest political leaders are entirely beyond the reach of their bishop’s discipline.

Unlikely as it might be, it is not too late for the U.S. bishops to contribute to a better dialogue about “Eucharistic coherence,” and this would begin with humility. Humility in the theological sense means seeing oneself as one truly is, and it usually depends on having at least some sense of how one is seen by others. The U.S. bishops continue to see themselves as prophets. That is, obviously, not how most Americans see them; it is not even how most American Catholics see them. The bishops have collectively lost the moral standing that prophets need through their mishandling of the sex-abuse crisis, their silence on the features of contemporary Amercian life conspicuously at odds with the Gospel, and their unseemly eagerness to ally themselves with depraved political figures like Donald Trump in pursuit of a narrow set of policy goals.

The good news for the bishops is that they are not required to be prophets. Their main role in the Church is pastoral, not prophetic. And if they wish to address the question of Eucharistic discipline as humble pastors rather than as would-be prophets, they should take care to exercise prudence. That would require paying close attention to the likely outcome of withholding the Eucharist from pro-choice Catholic politicians and realizing that, if their purpose is to advance an anti-abortion political agenda, then barring Biden from Communion is supremely counterproductive: it will alienate many Catholics, including pro-life Catholic Democrats, and reinforce the perception among non-Catholics that the pro-life cause is sectarian, which the bishops continue to insist it is not.

The bishops’ rhetoric often suggests that abortion is exactly like any other kind of homicide and ought to be treated as such by the law. If that’s what they really believed, then they would have to be in favor of some kind of criminal penalty for anyone who procures an abortion. Instead, they claim that women who have abortions are also victims and should not be punished—though Catholics who procure abortions are still automatically excommunicated. The bishops would do well to acknowledge that abortion is different from other kinds of homicide because any law forbidding it imposes a significant burden, forcing women to remain pregnant and give birth against their will. One can oppose abortion without ignoring that fact, or treating it as trivial. The bishops would also do well to acknowledge that translating even very important moral proscriptions into laws is a complicated matter, requiring prudence and admitting of disagreement. Finally, they should remember that, while they can compel Catholic laity when it comes to the sacraments, they and all those who agree with them about abortion will have to persuade many Americans who disagree with them if they want to change the law. That is what it means to live in a democracy.

Now for the Hard Part