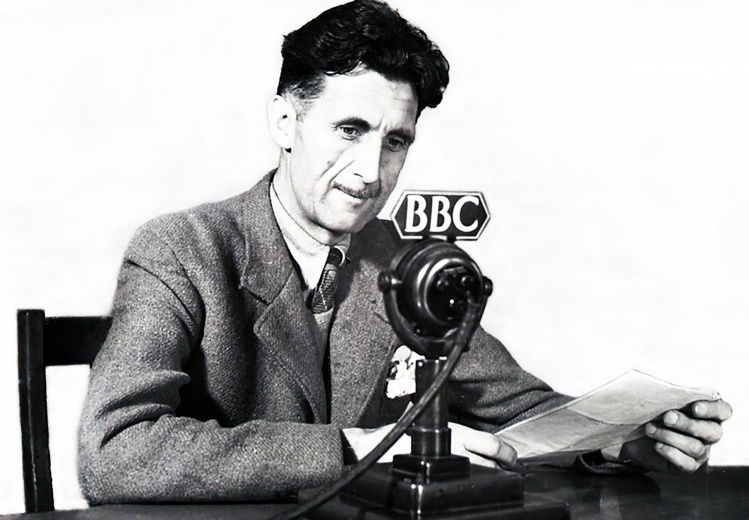 Seventy-five years ago, George Orwell (1903–1950) published the most famous political essay ever written—and also the most widely anthologized essay of the twentieth century: “Politics and the English Language.” Millions of American students have encountered it in college freshman composition courses or in introductory rhetoric and political-policy classes. A 1999 study found that between 1946 and 1996 it was reprinted 118 times in 325 editions of 58 anthologies intended for use in college-level composition classes—and that number has probably doubled in the past twenty years.

Teachers and professors assign the essay for various reasons: to promote cultural literacy, to foster critical thinking, to introduce the “plain style,” to heighten awareness of euphemism and jargon, and to clarify the connections between politics and language.  (One of the great ironies of literary history is that the essay was rejected when it was first submitted to a prominent London editor, George Weidenfeld, at Contact, only later to be accepted by Horizon, which was edited by Orwell’s friend Cyril Connolly.)

“Politics and the English Language” argued that the English language was being ruined as a tool of communication by an onslaught of vague and misleading words, dying metaphors, and obfuscatory jargon. Political discussion was thereby being corrupted and only a serious effort to seek the truth by both writers and readers would reverse the decline. To illustrate the worrisome decline in English prose, Orwell selected five passages written by well-known writers in the period just after World War II and then examined their various shortcomings. Throughout the essay Orwell’s commitment is to the use of language as an instrument for the clear and accurate expression of thought. His criticism is focused on language that serves either to distort meaning or hide the author’s intentions.

“Political language and writing are largely the defense of the indefensible,” Orwell conceded, citing various euphemisms and buzzwords used to justify jingoist nationalism, ideological purges, nuclear weapons, and political persecution. Politicians were responsible for much of the abuse of language, Orwell noted—and certainly little has changed since his day in that regard. We are still engulfed by Newspeak and doublespeak—that is, by language “designed to make lies sound truthful and murder respectable, and to give an appearance of solidity to pure wind.”

Bleak as the linguistic climate was in the immediate aftermath of World War II—and in the midst of Soviet-style dictatorships arising throughout Eastern Europe as the Cold War (Orwell’s own coinage) dawned—Orwell did not regard the situation as utterly hopeless. He suggested a few simple rules for combatting the trends he lamented. To be avoided: hackneyed metaphors, long words where short ones sufficed, foreign phrases where English equivalents or approximations were available, and the passive voice, which could too easily be used to obscure agency. English could once again “become a language of meaning and precision,” Orwell contended, if we would battle our “lazy habits of thought,” retire “worn-out phrases,” and exert “a conscious determination to achieve the utmost clarity of statement.” In our own era of “fake news” and “alternative facts,” the need for clearer, simpler language is as great as it was in 1946.

“Politics and the English Language” remains an important essay, but we have done it a great disservice by turning it into a dusty school assignment and presenting it as a model for imitation by students. As someone who has taught this essay to freshmen at the University of Virginia and elsewhere, I speak from experience. I have had mixed results with it as a teaching tool and question its suitability as a one-size-fits-all pedagogical staple.

Let me explain. First, we need to distinguish between what makes for a fine essay and what makes for a good model. The status of “Politics and the English Language” as one of the most frequently assigned essays in beginning composition classes has generated an unfortunate halo effect, whereby we teachers fail to admit how poorly it serves the needs of our beginning and remedial writing students. This is not Orwell’s fault: he did not write his essay for first-year college students. Rather, he published it in Horizon, the leading intellectual journal in London during the 1940s. He originally intended the essay to serve as a guide for fellow journalists and readers of literary magazines devoted to serious political matters. As editor of the London Observer, his friend David Astor made the essay required reading for the paper’s staff writers.

Perhaps that explains why so many journalists, professional writers, and lovers of the English language (including many English professors!) cherish this essay. Perhaps it also explains why my own teaching experience with it has been disappointing. I have found that Orwell’s advice in this essay can actually undermine, rather than nurture, the developing literary skills of beginners.

Take for instance his advice to avoid clichés. “Politics and the English Language” closes with a plea to “send some worn-out and useless phrase, some jackboot, Achilles heel, hotbed, melting pot, acid test, veritable inferno, or other lump of verbal refuse into the dustbin where it belongs.” I heartily concur. But when we read this passage in class I soon realized that this invaluable counsel did not register with my students at all. They didn’t even know what most of these phrases meant, much less that they were worn-out.

It is not enough to say, “Well then, go ahead and tell them!” or “Then let them look it up!” The problem runs much deeper. In the case of many students who are just entering an academic environment, we are asking too much all at once. Before we burden them with anxieties about improper usage or the political dangers posed by invoking dying metaphors, we might first encourage them to discover for themselves how clichés become clichés through overuse. We might help them become aware of how metaphors live in the language they speak today before we warn them about the danger of dead or dying metaphors in their writing, or counsel them to avoid an outdated list of clichés, some of which are now actually archaisms.

Orwell developed a direct and limpid prose style that has exerted enormous influence on writers and journalists of the past seven decades—the so-called “simple style.” Yet as most serious writers will attest, Orwell’s prose style is only seemingly simple. Behind it is an intricate art of rhetoric and argumentation. Like an Olympic athlete who makes record-breaking performances look easy, Orwell’s apparently casual and conversational style is notoriously difficult to master. It projects an Everyman persona and a populist ethos that enabled an intellectual like Orwell to sound like an ordinary man expressing common sense. His style was a writing strategy that he developed and perfected over many years. However natural and effortless this style seems to the reader, it demands consummate mastery of the English language.

Other bits of advice in Orwell’s essay are also unhelpful for beginning students—even though advanced students and professional writers will profit from them. Consider, for instance, his injunction to “use short words and to cut unnecessary words.” Experienced writers will recognize the wisdom of this advice. Yet what may have helped them and may also help our more advanced students may hamper the progress of beginning and remedial students who have very limited vocabularies. Rather than caution them against fancy or unusual words, we would do better to foster in them an interest in new words of all kinds. Let them first discover and exalt in “the joy of mere words,” the phrase that Orwell used in “Why I Write” (1946)—another of his great essays, published just two months after “Politics and the English Language.” We should encourage such students to spend more time with a dictionary or a thesaurus, and to experiment with the bounty they discover there. Admittedly, “the joy of mere words” might lead some of them down the path of prolixity, at least for a time. That’s okay. We should remember that Orwell himself spent long years struggling to be a writer (and destroyed at least two novels and several short stories during his twenties). He was a frustrated Georgian poet before he was a successful novelist and essayist.

So my final word of advice as a teacher of English and a scholar of George Orwell’s work is this. Fellow teachers, assign Orwell’s famous essay on politics and language if your aim is to promote cultural literacy and critical thinking, or to present a classic example of the plain style, or to discuss the niceties of good versus bad usage. But if you’re seeking to improve the literary skills of beginning student writers, don’t start with Orwell’s list of strictures or advise them to imitate the deceptive simplicity of Orwell’s own style. Remind them of whom he was writing for, and remind them that there are other good ways to write. Remind them that knowing more words will help them to make their writing more precise and therefore clearer, if not simpler. And remember, above all, that you cannot prune down a style that hasn’t yet had a chance to grow.