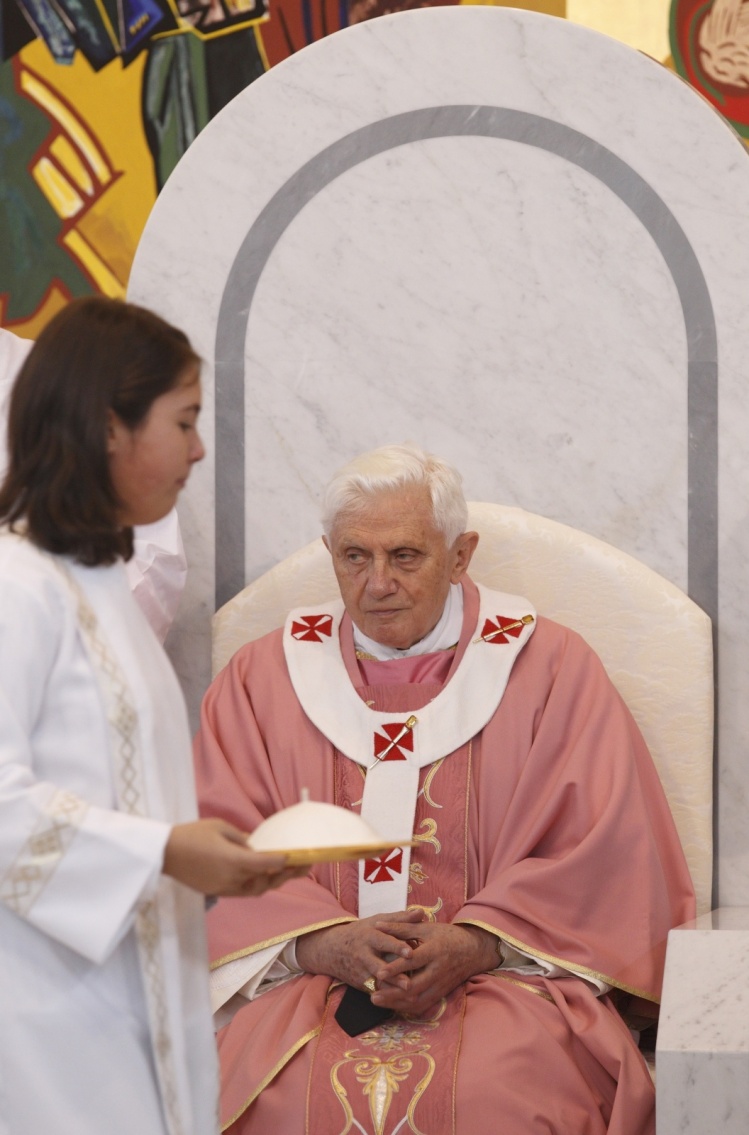 I think by now it's safe to say that altar girls are a positive part of Catholic life. Young women who serve the priest at Mass benefit from taking an active role in the liturgy, and the parish benefits from their service. There's nothing controversial about that opinion in my parish, and it's probably taken for granted in your parish too. But it would be a pleasant surprise to hear something similar from Rome.

The Vatican stopped saying no to altar girls just fifteen years ago. But to this day, it has never really said yes. To be more precise, in 1994, the Vatican finally said, “Yes, women are allowed to serve the priest at Mass, according to canon law.” But the pope has never said, “Yes, it is a good thing for girls and women to fulfill this ministry.”

Nevertheless, it's clear enough to most U.S. Catholics that, when the church blesses altar girls, they are in turn a blessing to the church. And I'd argue further that banning girls from the sanctuary is detrimental to the girls, the parish, and the church. My diocese waited for the official OK from Rome, which meant only boys could serve until I was thirteen. But I knew altar girls existed in other dioceses—some of which had introduced them along with the other liturgical reforms that followed the Second Vatican Council. This practice was officially declared out of bounds in 1970, and again in 1980, by the Congregation for Divine Worship. No reason for the ban was given, aside from a frankly unpersuasive appeal to “norms traditional in the church.” Those preconciliar “norms” no longer prevented women from being cantors, ushers, or readers at Mass. Serving the priest, however, was out of the question, thanks mainly to the lingering tendency to view altar boys as future recruits for the priesthood.

That was still the official ruling from Rome in the early 1990s, when Bridget Balthrop Morton wrote in Commonweal about her daughter's desire to be an altar server (“Hey, Bishop!” November 8, 1991). Morton's bishop had recently announced that altar girls were forbidden in the diocese of Orlando, but she noted other bishops permitted them on the grounds that “the 1983 revised Code of Canon Law dropped a 1917 canon restricting ministry at the altar to males.”

Those bishops were correct: the revised canon law did permit the use of female altar servers. But the Vatican didn't get around to confirming that interpretation until March 15, 1994. The Congregation for Divine Worship made the announcement in classic Vatican form: a letter was addressed to bishops stating almost offhandedly that it was indeed permissible for women and girls to serve at the altar. The decision had been confirmed back in 1992, the letter said, but it was only being promulgated now. The Congregation did not articulate the reasons for the long-standing prohibition, and it offered no explanation for the stalling that had kept parishes like Morton's, and mine, waiting since 1983. (“The norm is already being widely applied,” the Congregation noted, “by the fact that women frequently serve as lectors in the Liturgy and can also be called upon to distribute Holy Communion as Extraordinary Ministers of the Eucharist”—as though that inconsistency weren't the very reason this question had come up in the first place.)

Although the letter skimps on explanations, it does spell out in detail the right of every individual bishop to continue to bar girls from serving at the altar. Even after 1994 there was no guarantee the bishop of Orlando would relent, because the Vatican took pains to clarify that altar girls were permitted, not required. The Congregation's letter warned that bishops who chose to allow altar girls would have to explain their reasoning to the faithful.

The Vatican had it backward. What needed explaining to most Catholics in Scranton, Pennsylvania, when I was growing up was the no-girls-allowed policy, not the long-awaited change. I grew up watching my older brothers serve, admiring their faithfulness and expertise and waiting for the day I could join them. I was just finishing seventh grade when the news came down from Rome. Our pastor, Msgr. Paul Purcell, wasted no time bringing St. Paul's up to date. Local tradition held that altar boys stopped serving when they graduated from eighth grade, so when Monsignor wanted to begin a training program for girls he started by recruiting seventh-graders. That meant I just barely made the cut: six more months of stalling in Rome and I would have been too old to serve. At first, mine was the only name on the list of volunteers. My friend Jennifer joined me a few days later, and together we made up the entire inaugural class of altar girls at St. Paul's.

Our training was short and simple: Msgr. Purcell brought us over to the church one afternoon along with a couple of experienced altar boys. Our classmates walked us through their usual duties and gave us a tour of the sacristy as Monsignor supervised. The sacristy, I discovered, was the place where the mundane details of parish administration crossed paths with the mysteries of the faith. I saw the schedules for all the parish ministries hanging on the wall; the pyxes lined up to carry the Eucharist to the homebound each week; the books with records of baptized babies and the Mass intentions for the month. Monsignor explained what the sacrarium was and showed us where the keys to the tabernacle hung. He told us to help ourselves to the water cooler if we needed a drink on hot days. The boys helped us find albs that weren't too long or too short. They showed us the miniature refrigerator where the wine and unconsecrated hosts were kept. They let us practice lighting the candles—I had never even struck a match before—and then putting them out with the bell-shaped snuffer. I opened and closed cabinet drawers, memorizing the locations of the purificators and cinctures. I learned a whole new vocabulary full of wonderful Latinate words like “thurifer” and “ciborium.” Everything I had always taken for granted about parish life was laid out before me, and now it was my turn to be part of it.

Jen and I made our debut at the next school Mass. We filled the cruets (“Try not to spill,” the boys had said, “but it's OK if you do—it's just wine”) and set them out on the table in the center aisle, with the plate of hosts (dispensed from the baggie in the fridge). At the offertory we joined Msgr. Purcell to accept them back from the students who presented them to us. Then we knelt and watched as the gifts we had prepared became the Body and Blood of Christ. When Monsignor gave thanks for God's goodness in providing the “work of human hands,” I knew he was talking about my hands too.

At the end of Mass, Monsignor announced to the assembly that Jen and I were “trailblazers.” Everyone applauded. My mother was there, too, beaming at me from the congregation. Back in the classroom, bursting with pride, we asked one of the boys who had trained us what he thought. “You did pretty good,” he said. Then he offered one criticism: “Don't play with your hair so much.”

I didn't quit after eighth grade—I kept serving on the altar until I graduated from high school. By then plenty of younger girls had joined me, along with their brothers and classmates. I helped train some of them. Now, on days when the scheduled servers failed to report for duty, I didn't spend the rest of the Mass wondering why I couldn't go up and help out the way my brothers used to. And in serving on the altar I came to know the Mass more intimately, and to love it more profoundly, than I ever had from my place in the pews. There was no question in my mind that this was a very good thing.

In 2001, when I was in college, the Congregation for Divine Worship issued a further clarification of the rules. They declared, first of all, that men and boys could never be excluded from the privilege of serving at the altar. Then—without irony—the document defended the practice of excluding women and girls, asserting that even bishops who permitted altar girls could not require their priests to follow suit. Bishops were urged anew to explain why they permitted altar girls, lest the “innovation” of women serving at the altar lead to “confusion...thereby hampering the development of priestly vocations.” Once again, the Vatican seemed confused about what exactly the faithful might find confusing.

None of this would bother me so much if Rome had ever said anything positive about the service of altar girls during the past fifteen years. The “noble custom” of boys serving the priest has been praised many times over, but altar girls are still waiting for encouragement. As it stands, despite the notable lack of words like “preference” and “only” in Vatican decrees, there are men who claim the church really prefers that boys alone serve at the altar. And where there is a conflict between girls who want to serve at Mass and a priest who wants to keep them out, Rome has thrown its weight entirely behind the priest. If the Vatican is concerned about the “confusion” that causes, they haven't let on.

Fifteen years is not that long. The girls who serve at St. Paul's today are still wearing the albs the parish bought new for us in 1994 (at first they were just for girls, but now the boys wear them, too). But most of those girls never knew a day when their service at the altar was unwelcome. Whenever I go to Mass in my old parish, I want to tell the servers what it was like when I was in their place. I want to tell them about Msgr. Purcell, the retired pastor they may not even know. He didn't have to welcome girls into the sacristy at St. Paul's. He didn't have to treat us like the boys, and he certainly didn't have to call us “trailblazers.” According to the Vatican, he didn't have to bother changing anything. But I owe so much of my adult faith to the simple fact that he did.

Related: Fifteen Years of Confusion and Girls Allowed, from dotCommonweal

The Womanly Art of Arguing About Breastfeeding