‘Philosopher of the Heart’
By Gordon Marino
Philosophy
Theology
Books 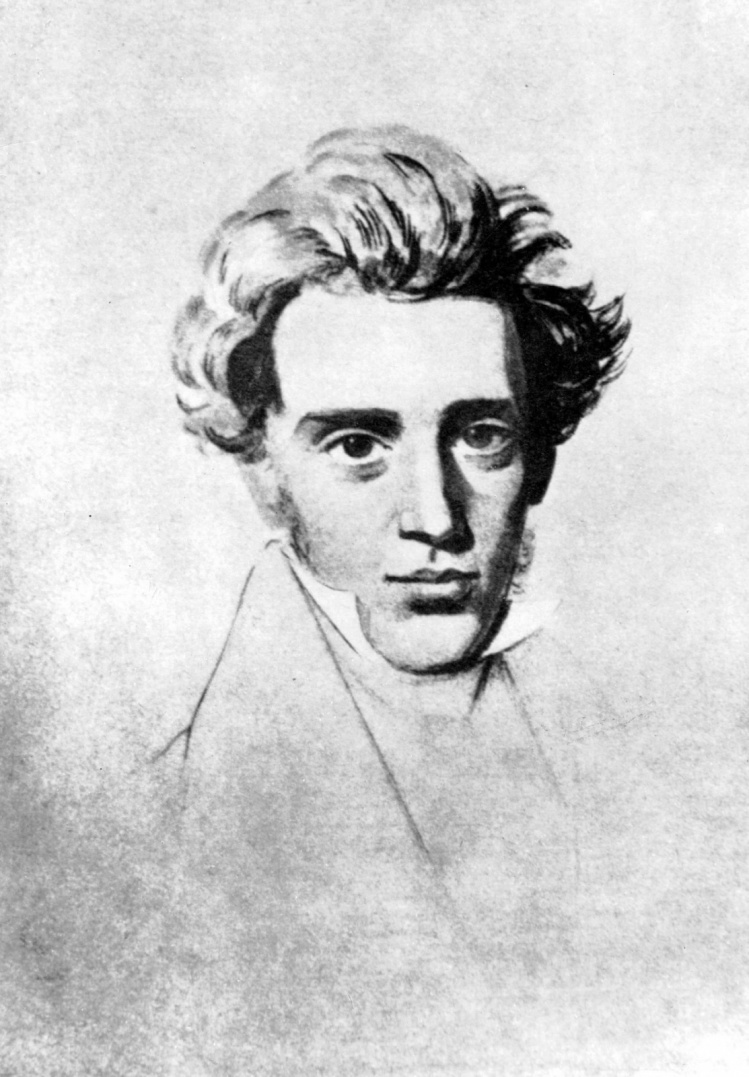 Søren Kierkegaard (1813–1855), a hybrid poet, theologian, and philosopher, widely regarded as the Ur-existentialist, argued that there is no riskier strategy in life than being risk-averse. In this, the eighth large-scale biography of the Danish firebrand, Clare Carlisle takes a number of authorial risks. For one, some of the book is written in the present tense and as though Carlisle were in the room with Kierkegaard, as in this scene: “The house is still, and he stands by the tall window looking out at Nytorv, smoke rising from his pipe. On this clear night the wide square is silvery and shadowy in the moonlight.” These mood-setting word paintings will evoke a “give me a break” from some, but will enliven the text for others.

In another daring move, Carlisle’s life of Kierkegaard does not follow a chronological order but instead marches along according to themes. On page one, we encounter Kierkegaard in his twenties; about fifty pages later, Carlisle begins to unveil Kierkegaard’s bizarre childhood. Those already familiar with an author sometimes referred to as the “Pascal of the North” will not be fazed by the temporal switchbacks; these might, however, prove mildly disorienting to those new to Kierkegaard. Still, Carlisle’s penetrating glimpses into Kierkegaard the person, her textual insights, and her concise and well-placed accounts of Kierkegaard’s relation to thinkers who inspired and/or riled him should compensate for any possible confusion.

Kierkegaard’s main aim as a writer was to enhance the inwardness of his readers; at the same time, he took a perverse if not sinful pride in his successful efforts to hide his own inner life. Even on his deathbed, he was pleased to think that no one had discovered the secret engine behind his monumental oeuvre. Of all his biographers, Carlisle, a professor at King’s College London, deserves the laurels for penetrating the heart of this “philosopher of the heart.”

That heart was riven by one of philosophy’s strangest love stories. Kierkegaard became engaged to Regine Olsen in 1840, but a little over a year later, for reasons he never fully explained, he broke off the engagement. Nevertheless, he remained smitten with Regine for the remainder of his life. Even though she married Frederik Schlegel in 1847, Kierkegaard named Regine the sole beneficiary in his will. Mining Kierkegaard’s mountainous journal entries and an interview with Regine that she gave after her husband’s death, Carlisle artfully charts the ongoing effect of Kierkegaard’s feelings for the woman he considered to be his partner in eternity.

Kierkegaard’s main aim as a writer was to enhance the inwardness of his readers.
sharetweet

Biographers have largely failed to capture the war between Kierkegaard’s desire for recognition and his goal of walking the path of a self-denying Christian, but Carlisle brings this struggle to life. Throughout his writings, Kierkegaard maintained that the only way to live spiritually was “to die to this world” of trivial concerns and constant comparisons. And yet, there can be no doubt that for most of his life, Kierkegaard was dying to be accepted by the Danish literati. In fact, he would sink into a dudgeon when highbrow critics ignored or rebuffed him. Ironically, in one of his journal entries Kierkegaard praises Schopenhauer’s genius, but laughs at the German philosopher’s pique at having failed to win a prize in an essay contest. Kierkegaard should have taken a look in the mirror.

His life was one long meditation on faith. Born into a wealthy and pious Copenhagen family, Kierkegaard would become to Lutheranism something like what Luther had been to Catholicism. Although he read Luther religiously, by the fifth act of his brief life he was chastising Luther for his worldliness. Carlisle helpfully summarizes Kierkegaard’s assessment of Luther: “Luther’s reforms coupled worldliness and religion in ways that suited the secular mentality already creeping into Europe.”

Kierkegaard’s work teems with puzzles and paradoxes. For example, why, given his Lutheranism, is there so little mention of grace in his writing? By way of explanation, Carlisle draws our attention to this passage from Kierkegaard’s Journals:

Christianity has been taken in vain, made too mild, so that people have forgotten what grace is. The more rigorous Christianity is, the more grace becomes manifest as a grace and not a sort of human sympathy.

Perhaps the idea is that it is only when we have tried to live a Christian life in all its rigor— when we have come not only to understand but to feel that we are sinners—that we can legitimately invoke the idea of amazing grace without presumption.

Lately, Kierkegaard has been threatened with “cancelation,” not only because of his backward views on women and his failure to protest instances of anti-Semitism, but also because of his silence on the Danish slave trade, which was hotly debated in his time. The trade was abolished in 1792 but, as Carlisle notes, the “decree took over a decade to come into effect, and slavery itself continued in far-off colonies through the first half of the nineteenth century—long enough to secure the rise of the bourgeoisie.” Kierkegaard’s own father, a wool merchant, profited from slavery and the slave trade.

What did the moralist Kierkegaard have to say about this moral outrage? Nothing. Kierkegaard berated the bourgeoisie for their tendency to hide in the crowd and avoid speaking up. In his magnum opus, The Sickness Unto Death, written under the pen name of Anti-Climacus, Kierkegaard observes that the all-too-common wisdom of the day is to keep one’s mouth shut unless one is absolutely sure of what one is about to say. Kierkegaard, like his hero Socrates, warns that when we remain mum we deprive ourselves of an opportunity to have our mistaken views corrected—if they are indeed mistaken. And yet, this champion of intellectual courage never lifted his super-charged quill to protest against slavery. The silence is hard to fathom.

Carlisle insists that Kierkegaard did not see himself as a reformer. Notwithstanding his barrage of criticisms of the Danish State Church, he steadfastly refused to become involved in reform movements. “Kierkegaard’s sole concern is the spiritual life of ‘the single individual.’ He believes this to be ‘diametrically opposite to politics,’ since it has nothing to do with ‘earthly reward, power, honor.’” Carlisle continues, “The louder the public clamor about these things, the more decisively he sets himself against them.”

Near the end of his life, Kierkegaard did take to the ramparts, publicly proclaiming that the kind of Christianity practiced in Denmark was not Christianity at all. Because of his use of pseudonyms, it is sometimes hard to identify what Kierkegaard himself really means to say, and harder still to track the evolution of his thinking over time. One thing is clear: his views on what it means to be a Christian were always developing. He eventually arrived at the firm position that to follow Jesus is to imitate Jesus. You can’t have your luxurious lake house and bear your cross too! During the last three years of his life, Kierkegaard launched a public assault on Christendom, maintaining that if the world is patting you on the back, you can be sure that you are headed in the wrong direction. He insisted that Christianity is nothing short of revolutionary. And he believed that when it comes to “equality,” there is only one true form—equality before God. Or as Kierkegaard emphatically puts it: “Before God every person is equally important, without reservation equally important.” (Perhaps this child of privilege would have been less contemptuous of more material versions of equality had he ever had to do a day’s labor.)

For all the virtues of this book, I feel compelled to quibble with Carlisle’s claim that Kierkegaard was ambivalent about Christianity. I wouldn’t put it that way. For Kierkegaard, drawing on the Gospels, true faith entails the risk of taking offense. You may be able to remove or at least reduce this risk by treating religion as if it were only a solid foundation for morality; but then you’d have nothing left but human doctrines, which do not require the new organ of belief that is faith. Religion without faith is popular with those who need some kind of system to secure their identity but who demand to be exempt from having to trust in the unseeable and, above all, from having to obey a will other than their own.

Kierkegaard is commonly mistaken as an “irrationalist” in part because he was adamant that faith is an offense to reason. For Kierkegaard, “where there is certainty there is no faith.” Also: where there is no risk, there is no faith. It is a Grand Canyon leap of faith to commit oneself to belief in a story as offensive to reason as the Gospel. Kierkegaard, under all his pseudonyms, proclaims that faith is something that both attracts and repels. We call Abraham the Father of Faith in large part because of his willingness to sacrifice his son at God’s bidding, an offense to secular reason and ethics if ever there was one.

As Carlisle explains, Kierkegaard believed that Danish Lutheranism was worse than paganism. At least pagans owned their disbelief, but Kierkegaard’s brethren domesticated Christianity to the point where the Good News was all about dancing around the Christmas tree. Plying the concept of offense, Kierkegaard aimed to make faith possible again by making plain how impossibly difficult it is. Carlisle’s relative silence on the concept of offense aside, this elegantly written biography delivers fresh insights into the life and thought of the enigmatic Pascal of the north.