Are these signs of a trend?
By John Gehring
Bishops
Donald Trump
Election 2020 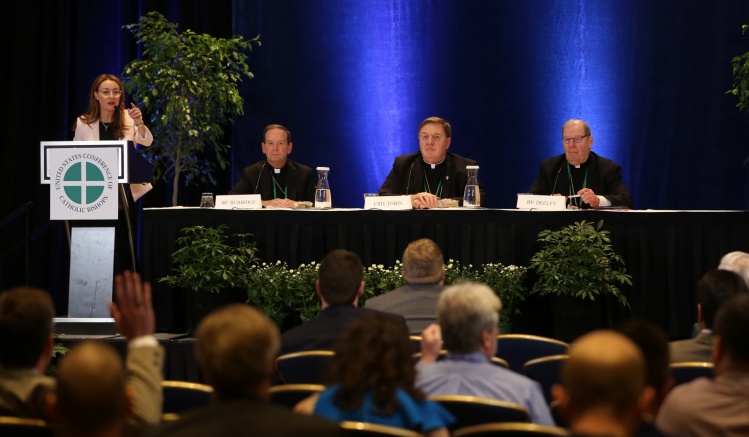 Three years ago, the U.S. Conference of Catholic Bishops pressured a respected longtime editor at Catholic News Service to resign after he tweeted his frustration with controversial religious-liberty bills in the Tennessee legislature. Self-appointed Catholic watchdog groups on the right that had targeted other conference officials they deemed insufficiently orthodox unleashed a campaign targeting the editor for “promoting the LGBT agenda.” The episode marked the end of a distinguished journalistic career for Tony Spence, a recipient of the Catholic Press Association’s top award in 2010.

I’m thinking about that now in light of some unambiguously partisan tweets from Judy Keane, the current director of public affairs at the U.S. bishops’ conference. In a May 29 tweet, Keane gushed about President Donald Trump’s record. “Lowest unemployment rate EVER, incredibly robust economy under Pres. Trump,” Keane wrote. “Read all accomplishments here.” Keane linked to a web site called MAGAPILL that touts Trump’s successes in the categories of government, economy, and national security. “ICE has conducted a MASSIVE raid on sanctuary cities this week—498 illegal immigrants arrested,” reads one headline on the page. “DACA renewals drop 21 percent,” reads another.

It’s worth noting that Keane’s employer has opposed Trump’s wall and strongly denounced the president’s termination of the Obama-era Deferred Action for Childhood Arrivals policy. “The cancellation of the DACA program is reprehensible,” the president, vice president, and chairman of the USCCB’s committee on migration wrote in a 2017 statement. “It causes unnecessary fear for DACA youth and their families… This decision is unacceptable and does not reflect who we are as Americans.” In a statement last month, the conference said the “inhumane conditions for children” being held in detention centers at the border “shock the conscience and demand immediate action.”

A few tweets might seem like a minor thing. Yet they are in keeping with a larger trend: the conference’s general shift to the right over the past fifteen years.
sharetweet

Keane hasn’t limited her political commentary only to cheer-leading for Trump. She has also criticized Democratic presidential candidate Kamala Harris. Responding to a news story headlined “Kamala Harris promises teachers a raise if elected president,” Keane retorted in a March 26 tweet: “She’ll be promising all kinds of things to get elected. Then she’ll raise taxes so hardworking Americans have to pay for it all. No thanks.” In her personal capacity, Keane has the right to slip on a MAGA cap and vent about Democratic candidates. But for someone who serves as a public voice for a conference of religious leaders that is supposed to avoid even the appearance of partisanship, her social media praise of a nativist, xenophobic president whose immigration policy is built on breaking up families is more than a little troubling.

A few tweets might seem like a minor thing. Yet they are in keeping with a larger trend: the conference’s general shift to the right over the past fifteen years. Frank Monahan, the longtime director of the bishops’ government relations office, identifies the 2004 presidential election as the tipping point. Democratic candidate John Kerry, whom some bishops pledged to deny Communion because of his support for abortion rights, was “just not seen as acceptable,” Monahan told me in an interview for my book several years ago. Since then, even as the bishops send letters to Congress on budget issues and have been a part of an ecumenical “Circle of Protection” campaign to protect social safety nets, the conference has increasingly come to prioritize fights against contraception coverage and same-same marriage. The conference has not spoken boldly about economic inequality, an issue Pope Francis emphasizes as a life issue, since its pastoral letter Economic Justice for All—written more than three decades ago.

Meanwhile, a network of wealthy conservatives seems to have gained greater clout with the bishops. Several bishops will gather with business leaders and donors later this month in California at the $2,600-a-ticket NAPA Conference at the Meritage Resort and Spa; headliners are Trump apologist Sen. Lindsey Graham and former Republican Governor Scott Walker of Wisconsin. Walker is remembered for his campaign—underwritten by billionaire businessmen Charles and David Koch—against Wisconsin’s public-employee unions. The annual Napa conference is convened by Timothy Busch, a Catholic philanthropist and CEO from Orange County who has called the minimum wage “an anti-market regulation.” A year after Donald Trump’s election, Busch organized a two-day, $1,250-a-person meeting at the Trump International hotel in Washington for an event billed as an exclusive gathering of “Catholic leaders, clergy, and important DC insiders.”

Partisan tweets and conferences at lavish resorts don’t make for the best optics. But seen as part of a broader pattern, this amounts to more than just a public relations issue. It’s more evidence of systemic problems at the higher levels of American Catholicism. What the hierarchy needs is a cultural transformation, built on a dramatically different understanding of the use—and misuse—of power. The likelihood of such a change seems ever more remote.

* At time of publication, I had not received any statement from the U.S. bishops’ conference on my request for comment about Keane’s tweets. I will update if I receive a statement.