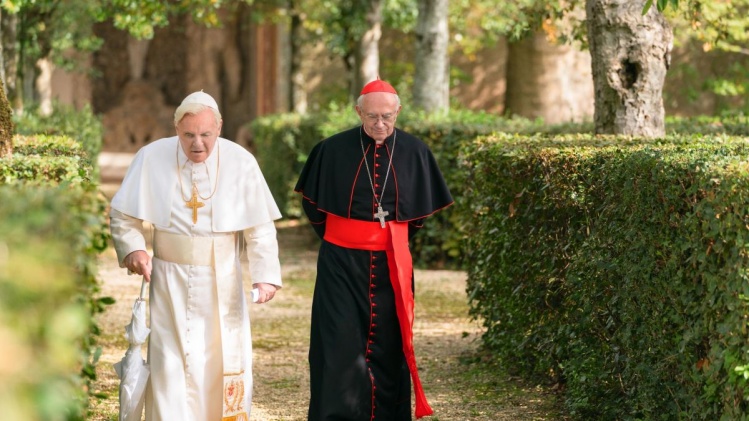 “The most glorious journey can begin with a mistake.” This is the observation made by Cardinal Jorge Mario Bergoglio in the opening scene of Fernando Meirelles’s The Two Popes, as he preaches to throngs of poor people in a Buenos Aires slum. It signals the central themes of the film: change, reconciliation, and hope for the future. The scene, shot on location in Argentina, surges with the energy of the people and the place. A kaleidoscope of color and activity soon settles into a moment of stillness and focused attention as Bergoglio speaks. He stands in the midst of all these people: not above them, but with them. And they are listening.

But what is the mistake? The first possible answer the film offers is that Bergoglio (played by Jonathan Pryce) has decided to resign from his position at the head of the church of Buenos Aires. He is tired and weary from the direction that the church is taking, and he wants out. As his repeated letters to Pope Benedict XVI go unanswered, he plans a trip to Rome to press the pope in person to let him retire.

Little does he know that, at the same time, Pope Benedict is contemplating his own resignation. What holds Benedict back from retirement, however, is his fear that Bergoglio might succeed him. In the 2005 conclave at which Benedict was elected, Bergoglio was a serious contender. The public forgot this fact during the conclave of 2013; many presumed that Bergoglio came out of nowhere. But the prospect of Bergoglio’s rise was not lost on Benedict. He kept an eye (and a file) on him. And he didn’t like what he saw: too much willingness to bend the rules and too little respect for tradition. Benedict comes to regard Bergoglio as his nemesis, someone with whom he disagrees so fundamentally that he fears what might happen to the church should the Argentine ascend to the Chair of Peter. Benedict (played by a fine Anthony Hopkins) decides to face his fears. Just as Bergoglio prepares to head to Rome, Benedict summons him for a face-to-face meeting—for his own purposes. “He must have gotten my letter after all,” Bergoglio mutters, not realizing there’s another agenda at play.

This is the stuff of comedy. And indeed The Two Popes is full of humorous bits, arising from the clash of opposites, thwarted expectations, and unexpected convergences. (One laugh-out-loud moment: the soundtrack accompanying the solemn entrance of the cardinals into the Sistine Chapel for the 2005 conclave suddenly blares strains of Abba’s “Dancing Queen.” A hat tip to Frédéric Martel?) Yet it is also a serious affair. The meeting between Benedict and Bergoglio becomes a three-day conversation over which the central drama of the film unfolds.

The first encounter between the two men takes place in a perfectly manicured garden at the pope’s summer residence—a sharp contrast with the rollicking streets of Argentina we’ve just seen. And of course this is a setup. All the clichés concerning the differences between the two popes come tumbling out. Benedict lives in regal isolation. He is stern, even censorious. He is concerned about protecting Tradition and Truth with a capital “T.” In a reminder that the indignities of old age are upon him, Benedict receives commands from his watch to “Keep moving” every time he pauses in his walk. Yet he’s clearly a tough old bird, and his strong will is on full display. Hopkins’s elderly pope knows that change is on the horizon, but he resists it with every fiber of his being.

Pryce’s Bergoglio is the perfect foil for all this. With wit and winsomeness, and aided by an uncanny resemblance to Francis, Pryce quickly helps establish the contrast between his character and Benedict. Bergoglio eschews luxury and lives simply. A true son of Argentina, he’s passionate about soccer and dances the tango. He enjoys his food. Most of all, he enjoys being with people. (At one point, Benedict arrives on the scene and is startled to find that Bergoglio has made friends with the gardener; together they are extolling the merits of oregano.) Throughout, and just as you would expect, Bergoglio wears clunky black shoes and carries his famous, scuffed black briefcase. The briefcase holds his resignation letter, which he will push under the nose of Benedict at every opportunity—a bit of stage business that grows more hilarious each time it is repeated (and it is repeated often). His dogged persistence in carrying out his mission is an indicator of his own strength of will. He does not bend easily.

There is no evidence either that Benedict was particularly anxious about the prospect of Bergoglio stepping into his shoes.
sharetweet

As their encounter progresses, Benedict proceeds to challenge Bergoglio on his record, while Bergoglio puts up a lively defense of his decisions and priorities. The discussion that follows is a quick run-through of matters of philosophical principle on which the two popes are reputed to disagree, or at least to have distinctly different practical approaches. But this is treated simplistically. At no point does The Two Popes become a film of ideas; there is no attempt to chart the nuances of their viewpoints. Meirelles hews firmly to the time-tested formula of setting two opposing personalities against each other.

Yet as they spend more time together, their exchanges become more personal in nature, more intimate, and more human. We learn through flashbacks about how the young Bergoglio decided to become a Jesuit priest. At a point of decision in his life, a chance conversation with a thoughtful priest whom he had never seen before and who, as it happens, was dying of leukemia, tips the balance. Is the unexpected conversation with a kind stranger perhaps the mistake that opens onto a glorious journey?

But the journey is not so glorious. Through flashbacks, we learn about the young Bergoglio (played by the accomplished Argentinian actor Juan Minujín). There are wrenching scenes concerning events that occurred during the dictatorship. Bergoglio was indeed mentored by a communist, a woman at a food chemistry lab whom he deeply respected. Her daughter was abducted by the regime, and she herself was later arrested and killed. We see the mistakes Bergoglio makes after being appointed provincial of his order at an early age. The film depicts the true story of how he ordered two Jesuits out of their frontline ministry among the poor during the Dirty War, out of fear for their safety, and his suspension of them when they refused. What he did not anticipate was that this suspension then would be interpreted as lifting the church’s protection; the two men were soon arrested, detained, and tortured. Many years later, one of these priests forgave him; the other never did. We learn of Bergoglio’s struggle with guilt for not having done more to save those targeted by the regime. We see how he carries within himself his own consciousness of sin and unworthiness as he goes into exile in Córdoba, Argentina, where his community has sent him after a tumultuous and divisive term.

Benedict, who by now has thawed considerably, listens and attempts to console Bergoglio. He confides his own sense of spiritual loneliness, and reveals his decision to resign the papacy. At the end of the scene, Benedict is moved to confess his own sins, and asks for sacramental absolution, which Bergoglio gives him despite being deeply shocked by what he has heard.

The roles are now reversed. Bergoglio forgets about pressing Benedict to accept his resignation as archbishop and tries instead to dissuade Benedict from resigning the papacy. Why? Because tradition demands it! The reformer doesn’t want so much change after all! Meanwhile, Benedict, loses his resistance to the prospect of Bergoglio as his successor. Maybe the man from Buenos Aires is just the person the church needs as pontiff. The defender of tradition becomes the one who breaks with tradition! And so we are to understand that the two men have looked into each other’s hearts with compassion. This changes everything.

All of this, of course, is fiction. Despite the emotionally satisfying resolution of the film, we need to remember that none of this actually happened. The conversation never took place. Confession and forgiveness were neither sought nor received. Benedict never threw his weight behind Bergoglio in the 2013 conclave (according to many journalists, he favored Angelo Scola of Milan and Marc Ouellet of Quebec), and in any case a retiring pope does not choose his successor. There is no evidence either that Benedict was particularly anxious about the prospect of Bergoglio stepping into his shoes, or that he changed his mind in the end. Although Francis has shown great kindness and solicitude toward his predecessor, the two have never become what you’d call buddies.

The most troubling fictionalization, however, is Benedict’s confession to Bergoglio. Meirelles muffles the dialogue, so we don’t actually hear what he says. But it seems we are to believe that Benedict confesses to knowingly reassigning predator priests—something not supported by his actual biography. The admission of guilt is prefaced by a vague reference to Marcial Maciel, the notorious sex abuser who founded the Legionaries of Christ. Ratzinger’s role in that case, however, was quite different from that implied by the movie. Far from enabling Maciel, Ratzinger, in his capacity as prefect of the Congregation for the Doctrine of the Faith, strove to have him removed from ministry; it was John Paul II who resisted. As pope, Benedict finally got rid of Maciel, sentencing him to “a life of prayer and penance.”

Did Ratzinger perhaps reassign predator priests while he was archbishop of Munich? Anything is possible, and certainly this sort of thing happened in many dioceses. But it is not a known fact that Benedict did so, and on a topic like this, an admission of guilt is far from a harmless artistic embellishment. This stuff is radioactive.

Obviously, Meirelles wanted to dramatize a relationship in which two men acknowledge their sins and confide in one another about their feelings of unworthiness for the great office they have been called to fill. And many viewers like to see antagonists arrive at forgiveness and reconciliation. The imagined dynamic between the two men is the most engaging aspect of the film, the most hilarious, and also the most meaning-laden—and the confession scene is part of it. Yet to suggest complicity in the sex-abuse scandals without a solid anchor in fact needlessly complicates things. Wasn’t there something that Benedict actually felt remorseful about to depict instead?

Glorious journeys do unfold, despite all of our mistakes. And sometimes, tradition and progress meet—and embrace. That’s the uplifting message of The Two Popes. If only it could happen in real-life Rome.